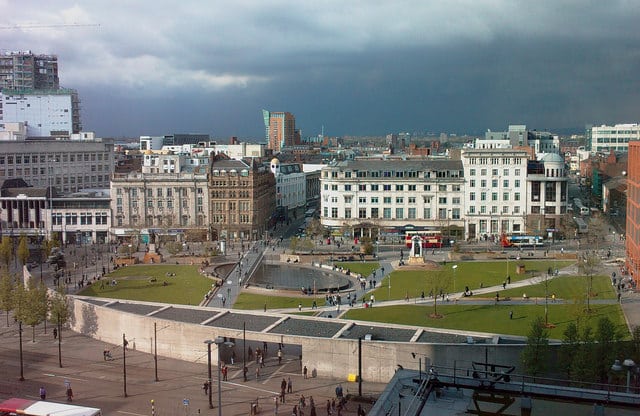 Petition made for Piccadilly Gardens revamp

Given the general dislike for Manchester’s Piccadilly Gardens, as well as its extremely high crime rate, the Manchester Evening News has put forward a petition to Manchester City Council to revamp the whole area and take it back to the glory days of the 1950s.

Currently, the area consists of a small playground, tired grass patches and a huge concrete wall that dominates the scene. On the review site TripAdviser, the area has been described as “the dumping ground of Manchester” and “stale and lifeless”.

The area’s crime rates are unusually high, with 87 separate incidents recorded by the Greater Manchester Police in December 2015 alone. Piccadilly Gardens is widely known as a hotbed of drug use and dealings, with one TripAdvisor user stating that the area has “more drugs than Boots.” From August 2013 to 2014, 80 separate arrests were made in the area in connection with drug dealing alone.

A recent Manchester Evening News survey found that over half of the participants did not feel safe in the gardens at night—The Tab reported similar findings, with one Manchester student adding “I don’t travel anywhere on my own.”

The gardens in 1949. Source: HistoryMe

The heyday of the gardens was the 1950s, when the area saw tended flower beds, trees, and a working fountain. One commentator on the Chorlton History website described the area has having an all-around “friendlier” atmosphere than today.

The current fountain is out of action and has been broken on at least 5 separate occasions since its installation in 2002. The city centre was rebuilt that year after the 1996 Manchester bombing, but the design has proven very unpopular.

The petition to makeover the “scruffy” gardens was released on 2nd March of this year and within 24 hours, it has received over 10,000 signatures—only 4,000 are required to demand that the city council publically discuss the issue. Once the petition has gathered 20,000 signatures the Manchester Evening News will present it to the council leaders to show the outpouring of the support it has received, hopefully prompting them to take action.

There have been several ideas put forward for the renovation already. The concrete wall and what to do with it features heavily in all of these suggestions, from demolishing it entirely to turning it into “something that everyone can enjoy.” This could include turning part of it into a backdrop for new restaurants and bars, to create a “flourishing night-time economy” or covering it in creeping plants and creating extra green space for the city.