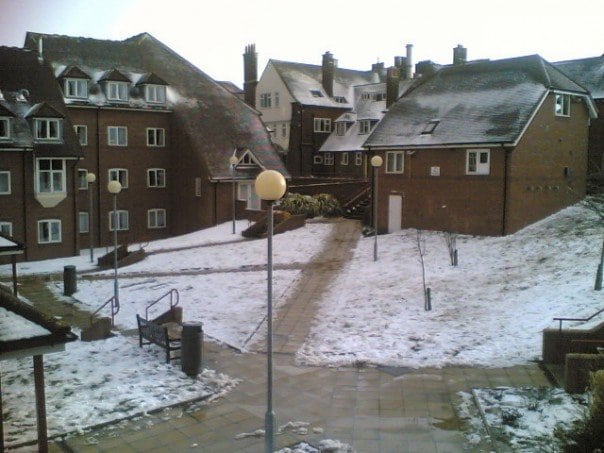 University of Hull students have been left feeling neglected after it was announced that the university’s Scarborough campus will move south to Hull. Students have expressed outrage at the prospect of not having enough access to their lecturers to aid them in their academic career.

Students, particularly those affected by the closure of the Scarborough campus, have now issued a petition in which they demand a £9,000 refund “to reflect the cuts in the level of service.” The petition already holds over 400 signatures.

The university’s Vice-Chancellor, Professor Calie Pistorius, announced his plans to close down the campus in April 2014. The number of students living in the Scarborough campus exceeded 1,800 in 2010. Now the seaside campus is only home to around 600 second and third-year students.

A university staff member told The Guardian that the abandoned campus was like as a “ghost town,” adding that “many academics have been reposted to Hull but administrative staff still have no idea what will happen to their jobs.”

After considerable pressure was placed on university bosses, they agreed to keep the campus’ library open through the night, however, students still cannot shake the feeling that their academic opportunities are being vehemently curtailed by the campus’ closure. On top of the campus moving 40 miles southwards to Hull, it is believed that around thirty university staff members could face redundancy, as the university is only transferring their lecturers and tutors to Hull.

Responding to recent developments in Hull, a university spokeswoman announced that “We are working with our students on the Scarborough campus to address recent concerns raised by them and have already introduced improvements to enhance their experience and directly address the points raised. These include the introduction of 24-hour opening at the campus library, improved the availability of academic support and reviewed catering.”

Most students expressed resentment at university management, claiming that the small Scarborough campus in which students had no difficulties in getting to know one another and found easy access to lecturers and tutors was one of the main selling points for them prior to their acceptance at the university.

The Student Experience Survey shows the negative effect the decision to close down the Scarborough campus had on student satisfaction. Out of 117 universities, University of Hull is currently 74th on the table. This is a dramatic drop from the survey two years ago in with the university was 44th in the survey.

A student who requested that they would not be named over concerns that it would would affect their grades, told The Guardian:  “It’s a nightmare from the students’ point of view.

“We know that we’re coming to a small campus and there’s good aspects of that: you end up knowing everybody, it’s very friendly, access to lecturers and tutors historically has been brilliant – or that’s what it’s sold to you as.”

The students have highlighted that they are particularly disappointed at the lack of information provided by Pistorius. “The campus and the town of Scarborough have been hung out to dry by a bungling vice-chancellor who hides behind his junior staff and hasn’t got the guts to appear before his own students,” one staff member told The Guardian.

The affected students, the majority of which are undergraduates, feel their request for a refund is justified given that the services they had originally paid for are not being met by the university. A student, who preferred to be kept anonymous, says they did not pay to go to stay in the Scarborough campus when their personal tutors are in Hull three out of five days.

“It’s depressing. We just want it to end now because it’s hard enough doing your finals, let alone doing them in a depressing atmosphere where you feel like you’re being hard done by. That is the consensus of how people feel: it’s tough and they’re taking the piss, frankly.”

The Mancunion will continue to update this story as it unfolds.