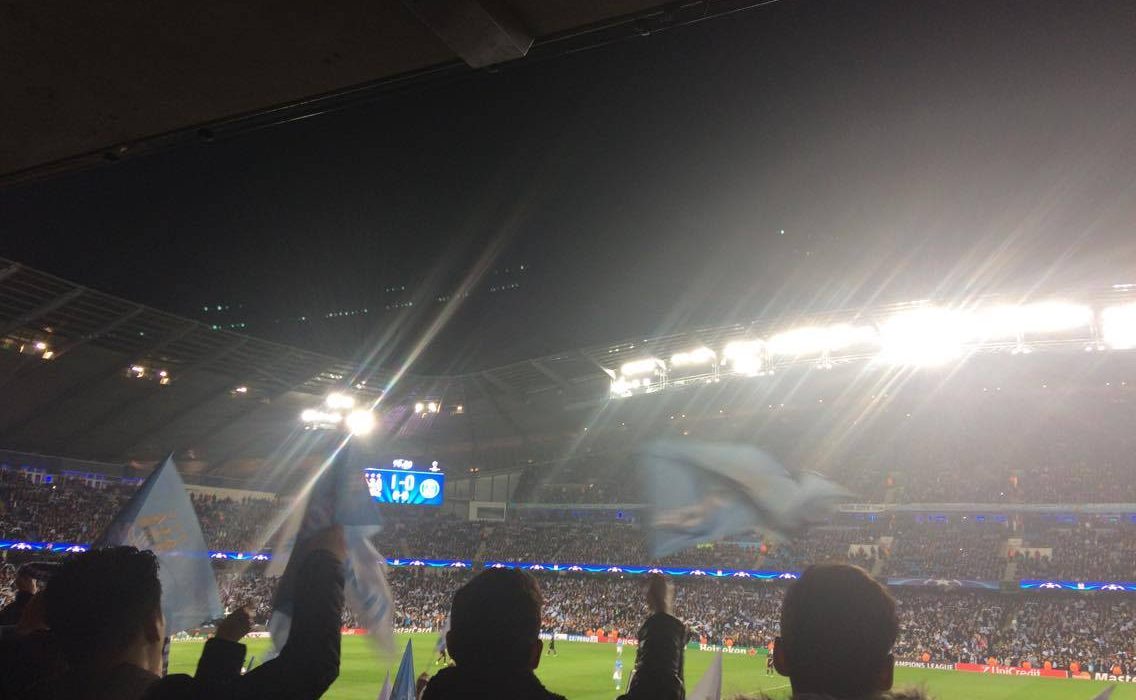 Despite how a date with destiny looms on Tuesday for Manchester City, as they face Real Madrid in the semi-finals of the UEFA Champions League, they had to turn their attention to the Premier League today and face Stoke City. The Blues didn’t disappoint as they ran out easy 4-0 winners! The goals came, the sunshine was there for all, and Toure, Silva and Aguero were all sporting some beautiful pink and yellow boots. How wonderful! Although it did look like they were all wearing fruit salads on their feet.

If this match was a film…

Kelechi if you can

Yea, you read right—that is the greatest pun you’ve read in a very long time! After a scintillating performance, City’s wonder-kid Kelechi Iheanacho brought the game to Stoke City and scored two goals while he was at it. Iheanacho became City’s joint third top scorer this season, as he scored his eleventh—now level with Raheem Sterling—which is quite the achievement considering he’s only started nine competitive games.

Iheanacho’s energy was evident from the first few minutes, and after initially taking five or ten minutes to get into the game with a few dodgy passes, it was nice to watch the belief and confidence of the striker increase as the match went on. He was anticipating the play before it happened, wasn’t afraid to shoot, and scored two very different goals highlighting his talent. Even from the sixth minute, the fans had created a song and were singing his name. It will be a day to remember for Kelechi Iheanacho.

City now have four wins in their last five games in the Premier League, after previous to this run struggling to knock up two wins in a row since October. Obviously City are well up for the fight for a Champions League qualifying spot, and at the minute are leading Arsenal, Manchester United and West Ham United in this race for the final two spots. Catch them if you can…

34th minute: GOAL! Jesús Navas’corner meets Fernando at the near post as he flicks it into the far corner of the net. Fernando with two goals in one month—prolific!

41st minute: PENALTY! After a pacey start to the game, not being afraid to see a lot of the ball, Kelechi Iheanacho was brought down in the penalty box by Ryan Shawcross, leaving Bobby Madley no choice but to point to the spot. This came after the Nigerian 19-year-old played a one-two with Yaya Toure.

42nd minute: GOAL! Sergio Agüero got yet another goal this season and became, for the time being, the joint-third leading goal scorer of the season! He puts the ball to the top right of ex-City man Shay Given’s glove.

48th minute: CHANCE! Stoke came out from the half-time break raring for battle, as Marko Arnautović put in a beautiful cross but Joselu put it well over. I always think you have to be a bloody good footballer to go by one name; Ronaldo, Ronaldinho, Jô etc. On this occasion, Joselu should have converted.

58th minute: SAVE! The pressure continued for Stoke, as this time Joe Hart had to spring to life and stop Arnautović from netting, after he wriggled free from Nicolás Otamendi.

63rd minute: GOAL! Kelechi Iheanacho got the goal he so very much deserved—just as Wilfried Bony jumped up and stood on the touchline waiting for his substitution, he watched in awe. Pablo Zabaleta, on his 300th appearance, pulled the ball across the six yard box, where the fox in the box was waiting to tap it in.

74th minute: GOAL! Iheanacho with another. Bony was the supplier after he played a delightful ball to the Nigerian, but it was Iheanacho’s first touch that made the goal possible, as he took the ball through the heart of the defence and then rounded the keeper for a tap-in.

Stoke were quite happy to sit eleven men behind the ball and then try for a counter-attack goal. Early in the first-half this proved to be relatively successful, but as soon as the deadlock was broken, it seemed to falter with some sloppy passing. This didn’t stop Mark Hughes trying his hardest to rally the troops back at his old stomping ground, as he acted as the fifth defender bellowing at them when to push forward when to sit back. At one point he even joined the back four from the touchline, to demonstrate when to move up! Although Hughes hoped this would look like an ex-Manchester United legend helping his team to a win—it ended up resembling when Robbie re-joined ‘Take That.’

Stoke don’t really have anything to play for this season anymore, and are quite happy in the middle of the table, but keep a keen eye on them next year as there’s some stars in that team. Arnautović played very well down the left wing, and surely Hughes will be given more money this pre-season to spend and get them up in the European spots next year.

Kelechi Iheanacho was easily the Man of the Match with two goals and one assist (if you count being fouled for a penalty as an assist), but we’ve already discussed Iheanacho earlier in my fantastic punny section ‘Kelechi if you can’ (yes, I’m still banging on about that pun). So, here I will highlight another player who brought his A-game today, and that was Fernando. If you were watching City last season you may have noticed that Fernando didn’t really cover himself in any glory, but this season he has been vital. Especially in the second half of the season, when City have looked somewhat sloppy at times, Fernando ‘the mop’ has been there to secure the midfield. He now looks easily comfortable on the ball, and is even dictating the occasional attacking play once he’s cut the ball out. Hopefully, if Pep Guardiola wishes to keep him next season, City will sign Leroy Fer too. Then we can have Fer, Fernando, and Fernandinho in midfield. Wouldn’t that be just great?

“I think that Kelechi is a player that will have an important role in this club in the coming years… His contribution is very important for the way the team play… I am very pleased for him.” – Manuel Pellegrini on Man of the Match Kelechi Iheanacho.

Stat of the Match

City have only conceded once at the Etihad to Stoke City—when they won 1-0 last year.

After a slight stumble at the start of 2016, it looks like City are finally hitting a little bit of form—now unbeaten in seven after the loss to Manchester United. The fans thanked Manuel Pellegrini during the match for this, singing his famous chant from the terraces! The Chilean replied with a wave and a smile. It’s nice that everyone’s friends again isn’t it?

It’s been a difficult year for City when it comes to player fitness, as they’ve seen constant injuries. With most of the team making a come-back now, here’s a little update on where everyone’s at.

Yaya Toure—ended the game with a muscle injury. Will be assessed tomorrow if he will be fit for the Real Madrid game.

Fernando—a little pain in his knee. Will assess tomorrow, but Pellegrini is optimistic.

Fernandinho—should be fit for Real Madrid. Rested due to very minor problem.

Samir Nasri—should be fit for next week’s Premier League match. Not in the Champions League squad.

Vincent Kompany—was rested due to risk, but is 100 per cent fit for the Real Madrid game.