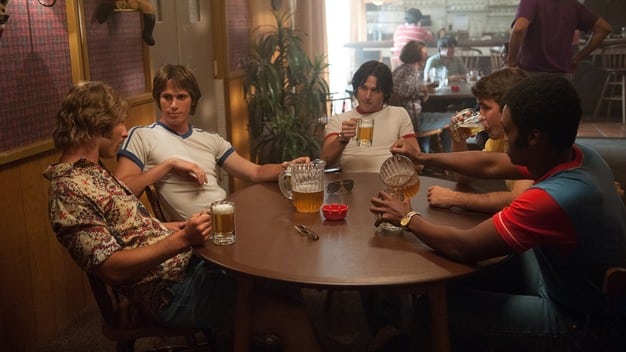 The year is 1980, Reaganism is yet to plague America and the afterglow of the ‘psychedelic Seventies’ is still in motion. Jake (Blake Jenner) is a college baseball freshman who, unsurprisingly, wants to get laid and boogie the nights away with his team mates. Acting as a spiritual follow-up to Linklater’s glorious Dazed and Confused and a pubescent extension of the themes found in the critically acclaimed Boyhood, Everybody Wants Some!! certainly fits into its director’s catalogue of film. Yet, behind the veneer of the auteur, one finds a self-obsessed male fantasy that celebrates a boorish attitude towards women, pop culture and combative competition.

Arriving in a 1972 sky blue Coupe- accompanied by the diegetic music of My Sharona– “The Knack”, Jake, is equipped with a box of records and ridiculously good looks for his freshman year at college. From the moment he steps into his new home, it is clear to him that competition and sporting banter will play a significant part in his stay. Greeted with a slight degree of animosity from Jay (Juston Street) and Roper (Ryan Guzman), Jake is instantly given the cold shoulder due to his pitching status. It is not until he meets the likes of the charismatic Finnegan (Glen Powell) and Dale (J. Quinton Johnson) that his enjoyment of college life truly begins. Whether his baseball teammates are wagering each other over a game of table tennis, or getting their “dicks in the door” with girls, their friendship is as complex as Homer Simpson’s ID, ego, and super-ego.

However, the period setting, mise-en-scène, and soundtrack stand out in a somewhat mundane storyline of screwing, partying and hedonism. Groovy disco songs, such as Take Your Time – The SOS Band and Miss Broadway – Belle Époque help to soften the overall nature of Linklater’s male odyssey. Additionally, the rose tinted feel of 1980’s America is undoubtedly captured. The liberation felt by the Civil Rights Movement and gay rights campaigners, such as Harvey Milk, still permeated society, unlike the following 80s which significantly regressed these fronts. The egotistical nature of the majority of Jake’s team is a deterrent to their invested screen time. One simply has to look at Boyhood to see the softening human touch that the director can use when the material is the right one.

However, Everybody Wants Some!! is not without its enjoyable moments. Whether they be comedic moments between Finnegan and Jake or the blossoming romance between the latter and drama student Beverly (Zoey Deutch), Linklater’s macho-centric delusion does hold a handful of amusing and nuanced scenes. The overarching notions of contentious American masculinity and the film’s overall attitude towards women leave a somewhat sour taste after the credits have rolled. Freshers’ Week is upon us and to take a leaf out of Jake’s book would be somewhat problematic. In spite of this, it is recommended to endorse their levels of alcohol consumption, as all students should.