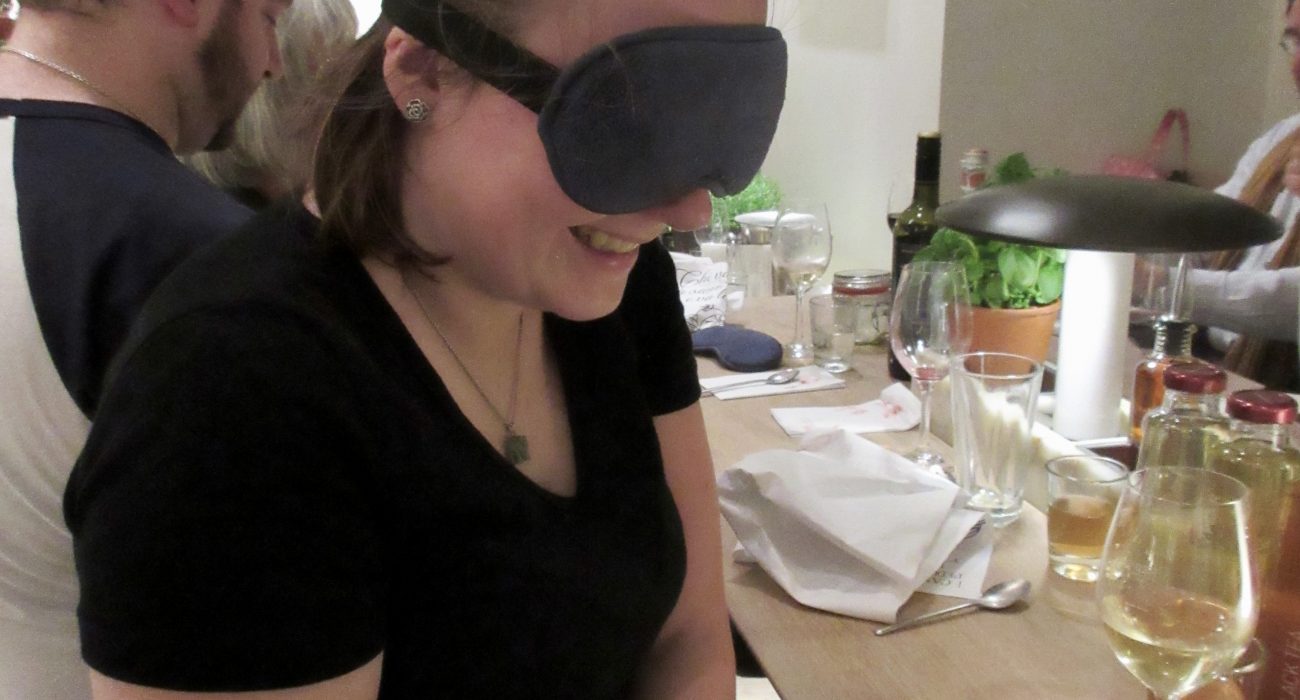 Vapiano, in the Corn Exchange, has a light, airy dining area and an impressive menu. There is an à la carte buffet where you choose any combination of pasta, sauce, and toppings before watching it being cooked in front of you. The restaurant got into the spirit of Manchester’s food and drink festival with a blind tasting. Last Thursday, ten members of the public arrived to find a table adorned with eye masks, bibs and wine glasses. The glasses were a good sign, the bibs, not so good! Their goal was to see if your sense of taste was up to the task of identifying flavours without visual cues.

The hardest challenge came, dunking bread into large shot glasses of salad dressing without being able to see anything. I began to understand the need for bibs! The table was split with each side receiving a different dish. The flavour of one salad dressing was hard to place—a creamy, garlicky flavour but apparently no garlic; it turned out to be for their Caesar salad. Generally I’m not a fan of salad dressings (or indeed salad) but these tasted great as a dip, and the bread… I’d go back for that alone.

We had two pasta courses next and it has to be said that our side drew the short straw with an overwhelmingly sugary (and some said spicy) orange and sweet chilli sauce. The other side, unfairly, got to enjoy carbonara. After a piece of bread to mop up the sugar and spice, and to ensure that we wouldn’t identify whatever came next as chilli based, we moved on to a great sun dried tomato sauce with courgettes and aubergines. The vegetables were hard to identify but that’s not terribly surprising as they tend to be very similar even when you can see the two (I have a dislike of them after spending a summer dicing 5kg of courgettes and aubergines every day). Thankfully all the pasta was short, as I dread to think the mess that we would have made twirling spaghetti blind.

The easiest of dishes to eat without seeing was the pizza, although you had to be careful not to smear it all over your face. I had accidentally practiced when I drank my wine blindfolded so avoided looking like The Joker. The first slice divided opinion as to whether it was chorizo or salami, it turned out to be Italian sausage, which was tasty but indistinguishable (in my opinion) from salami. Next was the classic ham and pineapple. I wasn’t sorry that the slice of pineapple on mine fell off when I couldn’t see it, as the taste of the pineapple still lingered.

A brief hiatus for iced tea followed. The company sell four iced teas, peach, elderflower, pomegranate, and cactus. The first three tasted great, especially the peach; a unanimous success. The cactus flavour divided opinion in a Marmite-esque situation. Some people thought it tasted brilliant but I thought it tasted like aloe vera—not a flavour that I enjoy. I firmly believe that aloe vera is for external use, not internal. (I once had a nasty surprise when my Dad bought me some apple juice and didn’t realise that it contained aloe vera—I didn’t notice either and took a huge slug—yeugh, it was like drinking TCP.)

Finally we got to the best part of a meal. Dessert. Tiramisu and strawberry pannacotta were both easy to identify (I think the coffee flavour is a big giveaway with tiramisu). My favourite dessert had to be the tiny slice of chocolate cake, a big slice of which, I think, really would be death by chocolate!

So is a blind tasting a good idea? It’s fun once in a while and interesting to see (or not see) whether you ‘recognise’ what you are eating—most of the table didn’t, but at the end of the day eating is a fusion of smell, taste, and sight, and a meal is better when all are present. I look forward to going back to Vapiano when I can see what I’m eating.