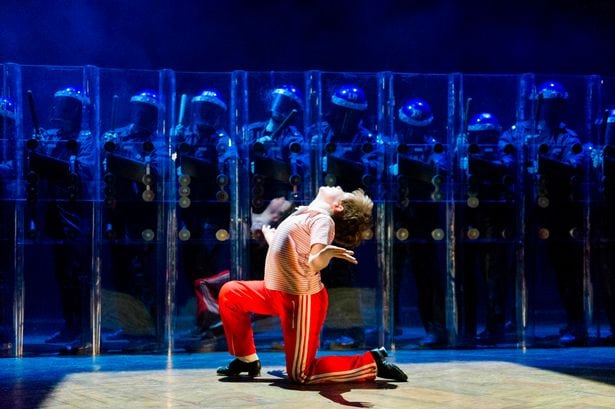 The multi-award winning, smash hit musical, Billy Elliot comes to the Palace Theatre. The musical about a young boy who just wants to dance, against the backdrop of the 1985 miners’ strike, takes the audience on an emotional rollercoaster.

Set in a northern mining town, where the strikes have made money scarce and class divides stronger.  This is the political climate surrounding the musical which prevents a happy-go-lucky narrative, instead offering a real depth to the characters and their situations.

By chance, Billy Elliot attends Mrs Wilkinson’s (Annette McLaughlin) ballet class after boxing training. It is here where Billy discovers his love for dance.  The dance sequences are beautiful. Particularly the dance duet between Billy and an older version of himself (Luke Cinque-White), both technically and visually spectacular, as Billy soars above the stage. The musical has numerous visually spectacular numbers, including the ballet class interlaced with fighting between Police Officers and strikers.

You can’t help but be overwhelmed by the talent you see on stage, particularly as half the cast are children. On the night I saw Lewis Smallman play Billy Elliot, but this role is shared by 3 other boys, making 4 Billy Elliots in total. Smallman was a sensation and left the audience wanting to jump to their feet in applause after every dance number.  No doubt the rest of the boys will be equally as impressive.  The children shone in their roles, not least Billy’s ‘cross-dressing’ best friend Michael.

The musical raises some interesting and complex issues. The heavy working class and masculine-environment, means Billy Elliot isn’t supported in his dance dreams, but instead is banned from attending more classes. These emotionally driven scenes between Billy and his dad (Martin Walsh), illustrates the danger of penning yourself into a box and the importance of being an individual. Mr Elliot eventually realises the importance of supporting Billy’s dream and takes him to the Royal Ballet Company audience in London.

The strike is one of the main themes running throughout the musical. Both Billy’s dad and brother are on strike along with the majority of the town. Those who aren’t are ‘scabs’ and shunned from society. The numerous references to Margaret Thatcher and a full scale dedicated song ‘Merry Christmas Maggie Thatcher ‘ means you are constantly reminded of how communities were ripped apart during the 1980s. It is sometimes easy to forget, but this musical fully reminds you of the importance of community. This is an important reminder, particularly as we now see our second conservative female prime minister, Thersea May, come into power.

The strong sense of community was perfectly encapsulated as the community came together to fund Billy Elliot’s audience costs. Countless sacrifices were made to help Billy achieve his dreams. One of the most emotional moments in the musical is when the strike is broken, as the audience know the devastating effects of this, whilst the characters can only assume. I certainly had to wipe away my tears at a number of moments throughout the show and I wasn’t alone.

However, it wasn’t all doom and gloom. Infact, the audience are sent into fits of laughter throughout, mainly because of the near constant, but still surprise of the children swearing . This show really does have it all. It thoroughly deserved its standing ovation. You take away the notion that everyone is different and you should take pride in being an individual, demonstrated in ‘Express Yourself’. Whilst also appreciating that you can’t achieve your dreams alone, but are part of a community and that is what makes you strong, highlighted in ‘Once we were kings’.

The entire production was phenomenal, from the northern accents to the tutus galore. This is certainly not one to miss.  Billy Elliot the musical is being performed at Palace Theatre till the 28th January. Get your tickets here. And remember to take some tissues with you.