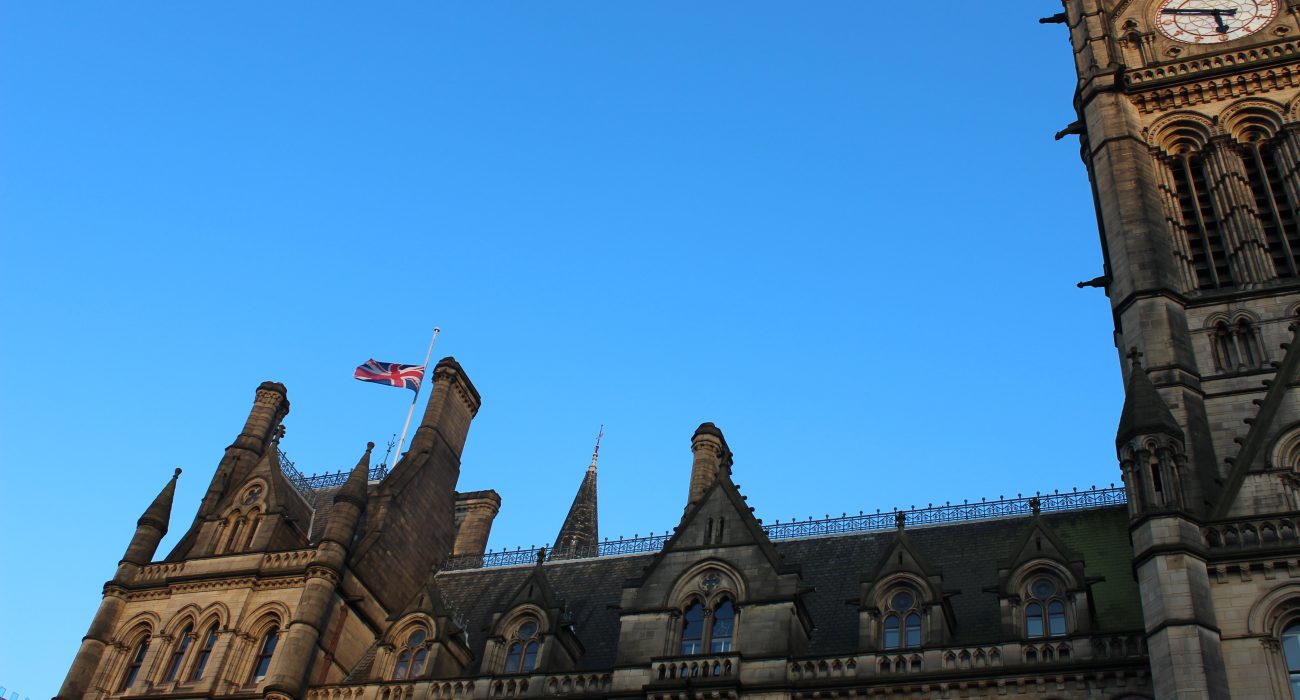 A vigil took place at 6pm on Thursday night at Manchester Town Hall to show solidarity with London, following the terror attacks in Westminster on Wednesday 22nd of March.

The Town Hall was lit up in red, white and blue and the Union Flag was flown at half-mast in tribute to the victims of the attack.

Greater Manchester Police Superintendent Arif Nawaz, when asked why it is important that cities such as Manchester show solidarity with London, said: “This is not just about London and Manchester. This goes nationwide. This is about the very fabric of our society, and the fact that we live in a rich, diverse, vibrant society.

“Something as appalling as what happened resonates throughout the country and far wider. This is about having a civilised society.

“The individual who does something as atrocious as that will not destroy what we have that we hold so precious.”

John Leech, former MP for Manchester Withington and current councillor for Didsbury West, when asked about the importance of the vigil, said he was here “to show solidarity with all the people who’ve been affected by the terrible tragedy yesterday.

“Numerous events are going on around the country to show their support for the people of London, but just not London, the people from all those other countries who come to this country to visit, and some unfortunately have been directly affected by this tragic incident yesterday.

“I felt it was really important to come show my solidarity and show everyone that we cannot under any circumstances kowtow to terrorism.”

Led by Carl Austin-Behan, the Lord Mayor of Manchester, the vigil was intended to show support for the people of London, and stand together in a time of conflict and disorder.

A book of condolences has been opened at the Town Hall for people to share messages of sympathy and support. The council also accepts online entries on their website.

The attacker has been confirmed by the Metropolitan Police to be Kent-born Khalid Masood, 52, of the West Midlands.

Masood drove a rented car into pedestrians and police officers on Westminster Bridge, before crashing the vehicle, running on foot and fatally stabbing Parliamentary and Diplomatic Protection Squad officer PC Keith Palmer. He was then shot dead by armed police.

The attack has so far claimed the lives of four people, whilst dozens remain in hospital in London. The other three named victims who were killed are Aysha Frade, Leslie Rhodes, and Kurt Cochran.

Victims of the attack include three French schoolchildren, four Edge Hill University students and a Romanian couple. Three police officers, two of whom remain in a serious condition, were also hit on Westminster Bridge. Four South Korean tourists in their 50s and 60s were injured in the attack.

The Islamic State group, who often try to impose their influence any terrorist attack that occurs, has claimed responsibility for the attack.

Councillor Sue Murphy, Deputy Leader of Manchester City Council, said that “Manchester’s thoughts are with everyone affected by the sickening attack at Westminster, and especially those whose loved ones were killed or injured.

“We also pay tribute to the bravery of the emergency services, including the police officer who lost his life defending others, and the civilians who helped those injured.

“This, not the actions of those who would sow hatred and terror, is the true spirit of Britain, and Manchester stands in solidarity with London.”