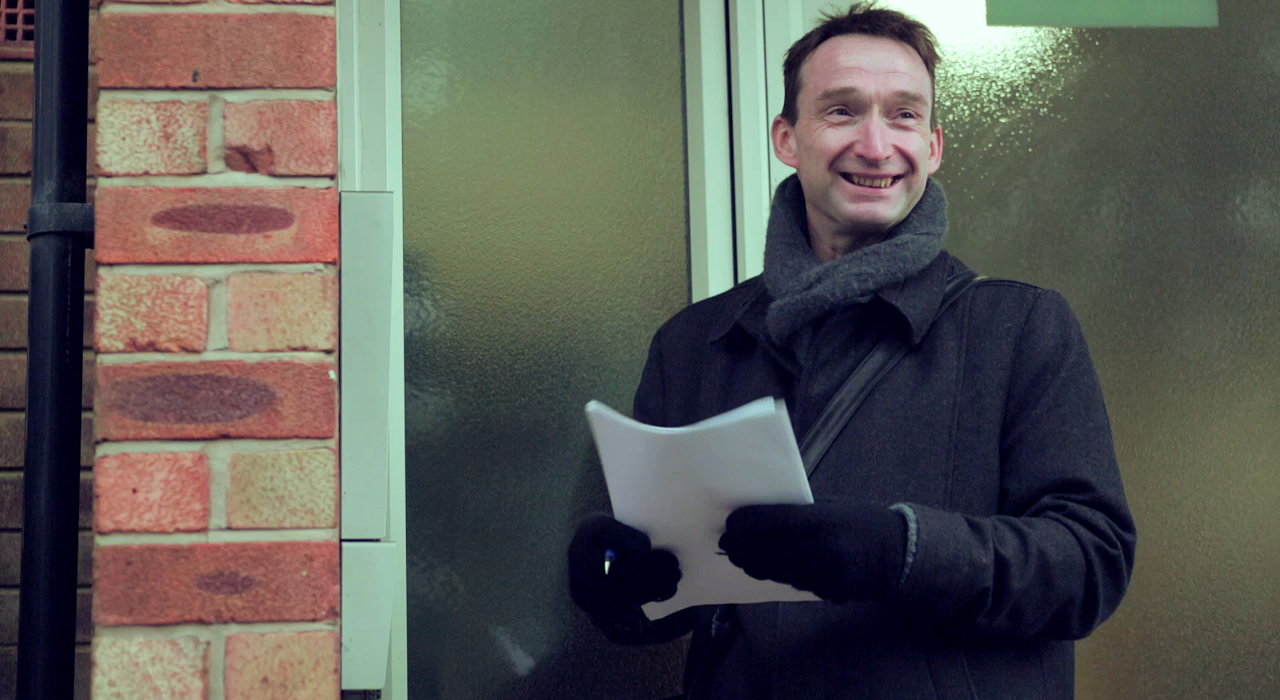 The first person to greet me as I walk into John Leech’s Chorlton based HQ is Leech himself, dressed casually in a Manchester City t-shirt and jeans, sorting through campaign material.

I have to wait a few minutes before we can start our interview while he speaks with a constituent who has come in to offer is support. After this we begin our interview in an office cut off from the noise of a room buzzing with volunteers, all wearing bright orange stickers which read ‘I miss John Leech’.

Leech lost the Manchester Withington seat in 2015, as one of the many casualties of the UK-wide collapse in support for the Liberal Democrats, however he is adamant that the stickers are not wishful thinking.

“If I had £10 for every time someone had told me over the last two years how upset they were that I didn’t get re-elected in 2015 I’d be a very rich man”.

This apparent desire to see a Liberal Democrat back in power does not, however, seem to be reflected within the national polls, for most of the campaign they have stalled on 8 per cent, meaning they have made little to no advance in the polls since their disastrous 2015 election.

Leech is not unaware of this issue and while he argues that he’s “not entirely sure that the national polls are accurate because the only real poll that we’ve had in the last eight weeks is the local elections where we polled 18 per cent of the vote”, he knows the reception on the doorstep he describes “doesn’t necessarily translate into votes”.

The Liberal Democrats began their campaign confidently with the hope that their passionate pro-EU stance would win over the 48 per cent of remain voters, but if we are to believe the polls this is not going to happen. With this in mind does Leech admit his expectations of what’s going to happen to the Liberal Democrats on June 8th have changed since the beginning of the campaign?

“Well we certainly expected to do better than we expect to do now…people seem to have waved the white flag and just accepted that the economy is going to be destroyed after Brexit”.

When this snap election was called most expected it to be the Brexit election, but domestic issues such as social care and now anti-terror and security policy in the aftermath of the tragic events in Manchester and London have taken precedence over the issue of Brexit.

I ask Leech whether the party may now regret pinning their hopes on remain voters, but he is unwilling to change the record and boldly claims “the reality is if the 48 per cent of people who voted to remain in the European Union actually voted Liberal Democrat we wouldn’t be leaving the European Union, because if we were back in government we would stop it”.

Leech also blames their lack of momentum on Labour and the fact in his eyes that they are conning voters “into voting Labour thinking that Labour are on their side on the issue of Europe”.

Leech’s bemusement at the support of remainers for Labour is clear, as is his obvious desire to continue to maintain his passionately pro-EU stance: “One thing that I’m not prepared to do is change the message”. However has this message failed to get through to the voters?

“I think so, yes” he quickly replies before blaming this on the fact “Labour have tried to avoid the election being at all about Europe, because they are so all over the place on the issue”.

Leech promises that when we do leave the EU, which seems now to be inevitable, he will be saying “we told you so… we warned people and we’re just going to have to face the economic reality of a trashed economy post-Brexit”.

On this downbeat note I change the subject to how he felt the night he lost his seat of 10 years at the 2015 election, but he admits he knew way before then it was “blindingly obvious” it was not going to go his way.

“From about 3 days after the election in 2010 I knew I was not going to be the favourite to win in Manchester Withington at the following election”.

The public had in his words decided in he was “going to get punished, because we’d been in coalition with the Tories, despite the fact the things that they wanted to punish me on I hadn’t voted for”.

Leech was one of two Liberal Democrats to vote against the coalition agreement, “the only living person who didn’t vote for the coalition”, he adds, with the former leader Charles Kennedy who passed away in 2015 being the other. Does he still believe this was the wrong decision for the party?

“It was the wrong decision made with the right intentions. People who voted for it genuinely believed it was in the country’s interest”, however despite this he claims “had we not been in coalition and had we then had a second election I am absolutely convinced that in the event of there being a referendum on our membership of the European Union it would not have been lost”.

“An undamaged liberal democrat party would have been able to persuade enough people who ended up voting leave to vote remain”, he explains.

I check I’ve heard him correctly and ask again whether he really believes joining the coalition is to blame for Brexit?

“We might as well get blamed for that because we’ve been blamed for everything else”, he jokes, but adds that no one “could have foreseen what would happen. I don’t think anyone actually thought that the referendum was going to be lost”.

The conversation turns now to the elephant in the room, tuition fees. Leech as with the coalition agreement voted against the rise in tuition fees, despite this I ask whether he feels it still impacts on the electorate’s view of him?

Leech explains he believed that the “compromise deal on tuition fees should have been no raise no fall”, but blames the previous Labour government and the Browne Review for removing funding from universities with the plan that this funding would be replaced by removing the cap on tuition fees, “everyone seems to have forgotten that”.

Leech is not wrong here, his party used to enjoy 30-40 per cent of the student vote before 2010, and since his party’s backtrack on their tuition fees pledge the Conservatives are now the second-most popular among students, according to recent research. I ask Leech what his views on tuition fees are now?

Leech maintains “a first degree should be free” but “we just can’t afford to do everything we would like to do”. Instead he outlines how the Liberal Democrats have prioritised education in the early years as they believe “the biggest barrier for people being successful… and going to university is falling behind early on”.

He also argues there needs to be “a proper debate about how many university places there should be” with so many people leaving University and ending up in non-degree jobs.

This argument does not seem to be changing the hearts of young voters however, particularly as Labour have promised to make tuition free; does Leech think he is going to win back student voters at this election?

Leech is not optimistic their message will win against “Jeremy Corbyn’s fantasy manifesto which offers pretty much everything apart from free ice cream for kids”, but argues that young people have not recognised that “if some political earthquake puts Corbyn into number 10 they won’t be able to deliver on it”.

I turn the questions now to local issues facing students in his constituency. In the past few years there have been numerous reports of attacks against young women in the area, which the annual Reclaim the Night marches aim to highlight.

Leech is adamant that as part of the planned redevelopment of Owen’s Park in Fallowfield, which will see more students flood into the area, there needs to be a fully costed patrol system funded by the university “to not only keep students safe but also to ensure that local people are also not having to put up with significant amounts of noise late at night”.

I ask whether he agreed with the use of G4S as patrols in the area and he admits he’s not “massive fan”.

“Ideally the university development [would fund] police community support officers to do that role, it’s far more appropriate for it to be done by the police, rather than by a security firm.”

In addition to Leech highlights that under the Liberal Democrats there would be an extra £16m per year for GMP to increase police presence, particularly in student areas such as Fallowfield and Withington, and Leech claims he has been working closely with GMP around the attacks

The issue of police presence draws our interview to the tragic terror attacks in Manchester, and now London. I ask what more he thinks needs to be done to prevent such an attack?

“I suppose the sad reality is if extremists want to do people harm…there are going to be certain tragic terror events that we can’t stop.”

However he explains there are ways of minimising the risk and claims the Prevent strategy which aims to this currently “simply hasn’t worked”.

Leech explains how his party believes it “needs to be replaced with an alternative, which we would call engage”. This alternative according to Leech would work with different communities to come up with a better strategy.

Alongside this Leech argues we need to “do an awful lot more in schools to ensure that young people aren’t being disaffected… We need to find out what the cause of that disaffection with young men is, where are we going wrong?”

As our time begins to run out I give Leech one more chance to try and win over the young voters of his constituency and he claims that during his 10 years as MP he “stood up for students” and was “constantly attacked for either standing up for students or for criticising students”.

Unsurprisingly however, his final words are on the topic of Europe as he urges young voters to recognise that “the other two main parties have abandoned remain voters”.