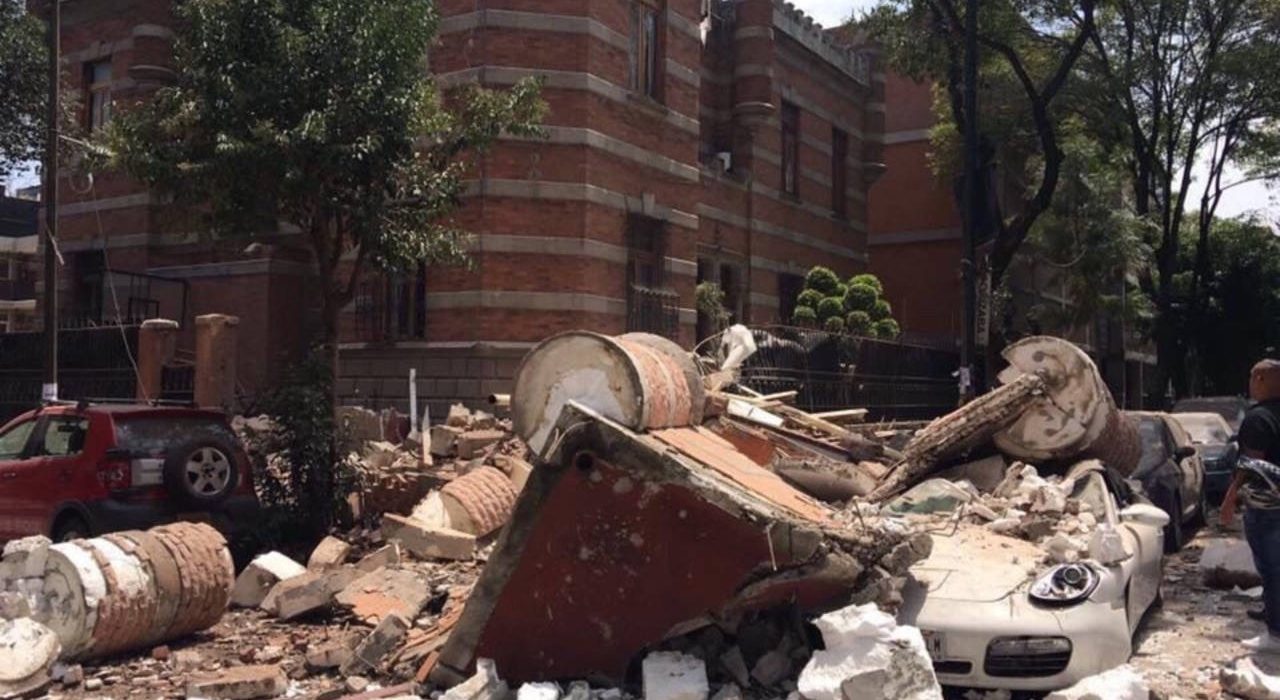 No doubt all of you have read about the tragic earthquake that struck Mexico on the 19th. Following a 3 week trip to Mexico with my boyfriend, Tay, we decided to end it with a week in Mexico City eager to discover this museum-ridden city.

Out of all the places we visited on this trip, Mexico City was the most eclectic. There are contrasts in every corner of the city; in one instance, you will see an old Mexican lady making blue tortillas on a charcoal pit, in another, a young man will shout at you with his microphone urging you to buy hard drives for your MacBook.

The 19th of September started like any other day. We were staying in an Airbnb in Centro Historico. At around 10.30am, we left the flat to get breakfast. The air was heavy with pollution and the atmosphere was charmingly chaotic.

The day started with a few hiccups — I was told my card was void and Tay had already lost his. Our shining beacon of hope was that we had some money that we could change for Pesos.

For lunch, we decided to go to the area called Roma. Tay signalled one of the many taxis lined up on Madero and we quickly drove off.I sat on the

I sat on the left-hand-side of the taxi as we drove up and turned into a large boulevard. Menial concerns flooded my brain as I put my phone away and looked out the righthand-side window where Tay sat, worrying about our lunch reservation.

I suddenly see crowds of people screaming and running past me and I could hear this shrill siren which I initially assumed was an ambulance. I hadn’t felt anything; my brain was in pure confusion. I thought “why are people panicking over an ambulance…”. It was then that I felt the car violently vibrate and the taxi driver started shouting at us erratically in Spanish.

It felt like the car was being tossed from left to right over and over again. I started spewing random swear words as my brain panicked and attempted to open the door. The door wouldn’t open and I saw I was alone in the car. I am suddenly pulled from the other side of the car by Tay who drags me out and tells me we need to run.

As I leave the car, I am violated with the image of this grey beast of a building wavering from side to side above me. I feel violently sick as it looms over me. The trees shudder and parked cars scream for help. The ground is no longer something I can rely on. We are surrounded by fleeing bodies.

We try to run hand in hand away from the building but I find my balance fails me and my steps grow more pathetic. It was as if I had been unwillingly forced onto some sort of rodeo simulator and my body was being flung back and forth.

What felt like forever then, now only feels like a fraction of a minute. I find myself grasping for more memories, trying to recount more of what I had seen. Until now, I am cocooned in a layer of shock that I haven’t quite been able to shake.

When the tremors had stopped, and I could firmly anchor myself on the ground, I looked around to see vast swathes of people embraced in hugs and crying — scrambling to find the people they were with. I realise I have been thrust into some sort of clichéd apocalyptic Hollywood movie scene.

Tears were imminent and I wanted desperately to go home. Tay’s face was painted with shock. He had no words.

The atmosphere after the earthquake was unlike anything I have ever experienced. Streets that were normally filled to the brim with busy city goers were deserted. The only noise from the streets was the sound of news reports or piercing announcements on speakers from the police authorities.

The weather mirrored the sombre mood. Dark bodies of cloud brewed over the city and a black smoke from the crush of the rubble rose into the sky. Lines of people clasping shovels and hard hats marched towards the devastation ready to help. The atmosphere was brim with tension and I found myself flinching at every sound.

I realise how privileged I am to be safe with a stable roof over my head, and I mourn deeply for the people all over central Mexico that have not been as lucky.

As I lie here in bed writing this, I will only remember Mexico as the phenomenal and breathtaking place that it is because of the strength and uniqueness of its people.Please donate however much as you can to these worthwhile charities. Thank you.

Please donate however much as you can to these worthwhile charities (www.cruzrojadonaciones.org and www.topos.m). Thank you.