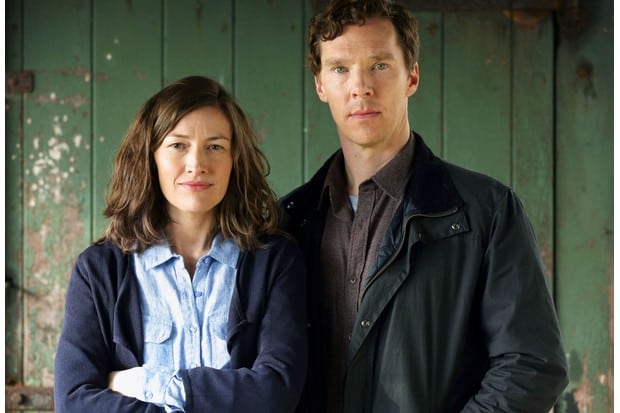 Review: The Child in Time

The BBC1 adaption of Ian McEwan’s 1987 novel A Child in Time follows Stephen Lewis (Benedict Cumberbatch), a children’s author, who loses his four-year-old daughter Kate in a supermarket never to be seen again. The 90-minute drama pivots between the lives of Stephen and his wife Julie (Kelly MacDonald) immediately after the tragic event and three years on.

A Child in Time follows the separate journeys of grief Stephen and Julie experience after the disappearance of their daughter. Cumberbatch and MacDonald demonstrate this with ease, at first the sheer horror and desperation between the two searching for their daughter which is then followed by bitterness and anger, and eventually the downfall of their marriage once blame is ascribed.

Rather than donning a deerstalker or playing an extraordinary superhero Cumberbatch portrays an ordinary man riddled with guilt and grief who has been flung into a perpetual state of searching. His performance is so raw and gut wrenching you are clearly reminded why Benedict Cumberbatch is one of the best actors of his generation.

Kelly MacDonald is fantastic in her role of Julie, she is sometimes cool but never not caring. Her exploration of grief is something to be applauded, especially her darker days of anger, desperation, and ultimately leaving.

There are moments within the drama which quicken the heart rate and make a lump form in the throat of any viewer – parent or not. A particular one for me is the sign Stephen leaves on his door saying he’ll be home soon whenever he leaves, even if it’s just for a moment, just in case Kate in her yellow rain coat returns.

A Child in Time does an exceptional job of highlighting the horror in everyday life. Especially in terms of sound. The deafening silence which follows Stephen and Julie in their homes is suffocating, the chatter and check out bleep of the supermarket as Stephen’s world falls apart is cruel and uncaring. The drama highlights that although your world may be collapsing time still moves on indiscriminately.

There is a scene in which Stephen travels home to visit his parents, he mentions in passing that he visited Julie to which both of his parents, especially his father emphasises that he thinks of her often after all that she’s been through. I found it very interesting that it came across that he didn’t share the same empathy for his own son, despite him still going through the same process, as if, like Julie did in the wrath of grief, he too blames his son.

The drama explores childhood on three levels: the trauma of two parents losing their child, a man who feels robbed of his childhood and is desperately searching for it once more, and finally, the government’s intervention in child development.

Between the three the narrative itself is lucidly laced with the day dreams of Stephen and his Mother, everywhere he goes he thinks of her and catches glimpses of her, at first always out of reach but as the drama progresses always close to hand. He’s missing her, but more importantly, still continuing to love her.

Stephen Campbell Moore plays Stephen’s friend Charles who retires from his position in the government to up sticks and move to the country side with his wife, Thelma (Saskia Reeves).

Charles is desperately longing to be a child again. This is revealed rather abruptly, Charles is running full force, arms spread wide open, towards his den in the woods. His actions sudden, hungry, and uncontrollable – not those associated with a man who’s just retired.

Stephen Campbell Moore gives a standout performance in this role. The balance between the mature middle aged man and the cheeky child he longs to be is heart breaking. He has the ability of embodying the boy he longs to be but immediately switches back to the middle aged man talking to his friend, even if it’s only for a moment.

Stephen finds his friend, a grown man in his school uniform, hanging nalone in the woods. That moment which will dry out the throat of anyone watching once you realise how desperately unhappy Charles must have been tormented by what he longs to be but constantly reminded of what he ought to be.

A Child in Time had the potential of being utterly miserable but instead is a tale of endurance and ultimately hope. A must see.