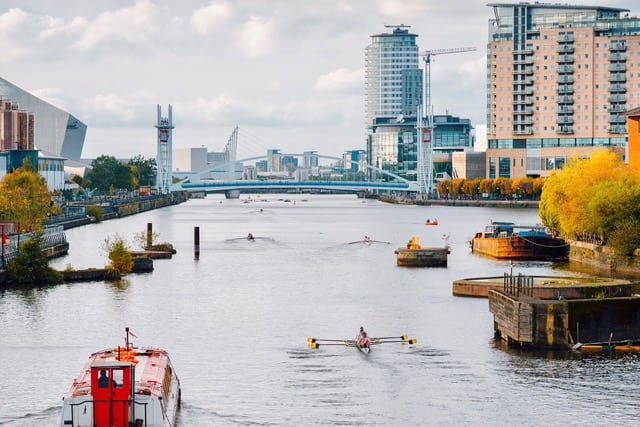 Saturday the 14th of October saw the Manchester University Boat Club (MUBC) take to the rocky waters of Salford to battle it out at the Agecroft Head Rowing competition. The competition saw boat clubs and universities from around the Manchester area come together to compete at one of the first races of the season. With the — sort of — home advantage, the teams started in the middle of Spinningfields and raced the 3.25km race down to the Lowery in Salford.

The first boat of the day was senior woman Ruth Haigh who powered through the wind in her single taking fourth place. Followed by Oliver Collinson and Sebastian Baylis in the double who won MUBC’s first gold of the day. The senior men narrowly missed out on the gold in both the coxed four and the quad races.

Despite the tough conditions, all of the boats made a great start to the season and year ahead. Taking home a total of seven medals across the breath of the senior squad sets up MUBC for a successful year. The club was even joined by one of its alumni Mr Richardson who represented the Alumni Club Nemesis Boat Club in the single, showing us that MUBC rows on after graduation!

The club was joined by even more members of the Alumni Boat Club on Sunday for the Nemesis training day. Whilst our competitors were resting, both the seniors and novices at MUBC we put through their paces by experienced rowers who all had MUBC in common.

Across two venues over ten crews were sent out in sculling boats, fours and eights to undergo a technical analysis from those who know it best. Novices were given the chance to cox down at our Boathouse in Sale, whilst the seniors enjoyed the sunny weather out on the open waters of Salford Quays.

Overall it was a great weekend that signalled the beginning of a winter of hard work. Pushing our squads to train harder and smarter, and get the most out of rowing and what MUBC can offer. Let’s hope we can reap what we sow and add to our Silverware collection!