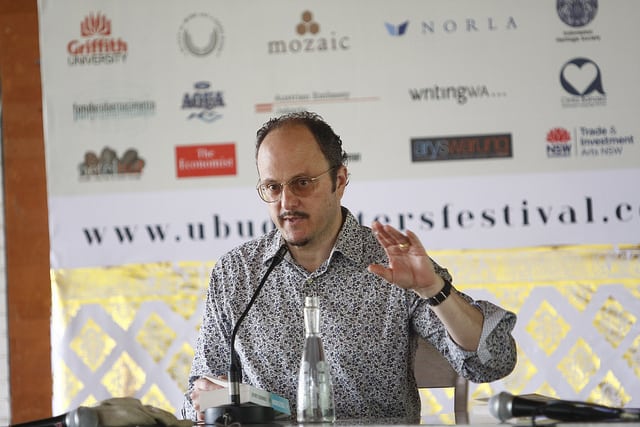 Fresh Complaint, Pulitzer prize-winning author, Jeffrey Eugenides’ first collection of short stories, is made up of work spanning his thirty-year career. It is filled with flawed characters in difficult personal and financial positions but there is nothing flawed about Eugenides’ writing. He is a solid story-teller; there’s not a bad sentence in the book, let alone a bad story.

Eugenides manages to write about surreal situations in a realist style and it makes for very funny reading. Each story is pushed just far enough from reality that reading the book is to be shown life from a new perspective, but not so far away as to become gimmicky and contrived.

Here, I’m thinking of Baster, which opens with the line: “The recipe came in the mail: Mix semen of three men. Stir vigorously.” It is undoubtedly a funny story but it subtly reveals a much sadder, emotional core as it progresses.

This is typical of the book. Eugenides delivers moments of compassion in small measured jabs. Despite his previous long novels, the economy of the short story seems to suit his writing style. Highlights for me are Early Music, Capricious Gardens and the title story, all of which feel like they could not have possibly been shorter and would not need to be any longer.

It’s impossible not to sympathise with the characters in the book, and this is an achievement as a lot of them do pretty awful things. For example, the hilarious way in which the protagonist in Find the Bad Guy is portrayed makes it easy to look past his very clear character flaws; reading it I found myself feeling bad for a man breaching a restraining order and stalking his ex-wife and children. Fresh Complaint is a testament to how Eugenides is a master of empathy, these stories are written with heart as well as wit.

For people who have read some of Eugenides’ other work, some of the characters in this collection will be familiar. There is a Middlesex spin-off in The Oracular Vulva and Mitchell from The Marriage Plot makes an appearance in Air Mail.

It’s clear while reading that this is not a book that was sat down and written in one go but compiled over years (each story ends with the date in which it was written). Interestingly, the stories aren’t placed in the order in which they were written, and the reader finds themselves flicking from 2017 to 1988 to 1996.

There are, however, no jarring shifts in style or tone, which proves that Eugenides has been a consistently good writer over the course of his career, but also that he hasn’t changed that much either. One criticism of the book is that there isn’t an incredible amount of range and that perhaps the lack of giant shifts between stories shows a lack of improvement.

I would argue, however, that Eugenides’ style is less stagnant than at a point where improvement would be hard. The book is a great example of well-crafted writing; every word earns its place, each sentence is laced with meaning. Eugenides achieves what a good short story can do better than any other form.

Through examining small cross-sections of characters’ lives, he creates a bigger picture surrounding them and directs the reader  to think about the world around them. Alongside his sprawling novels, I believe the stories in Fresh Complaint show that Eugenides is one of America’s best writers and this new book is a great bite-size introduction to his work.