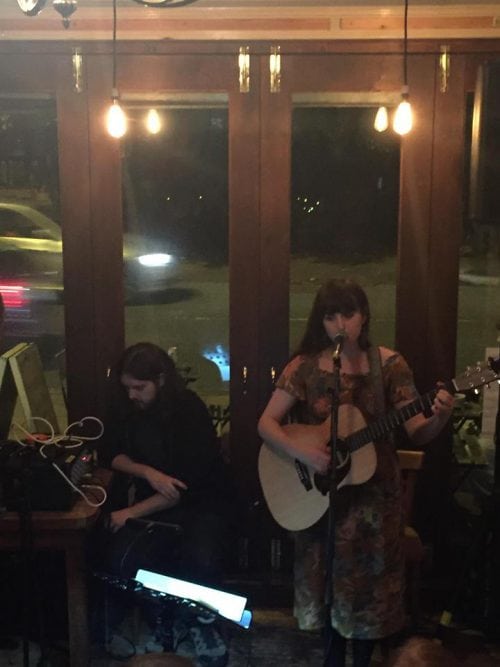 Manchester-based artists celebrate the life and work of Leonard Cohen

“When I listened to his work, it felt like for the first time somebody was actually talking to me”

This was the mood of many who were attending ‘Leonard Cohen – An Appreciation’ which was organised by the promoter Mathew Hibbert, at The Art of Tea in Didsbury, Manchester.

The event took place on the 9th and 10th of November, free to attend with donations accepted and divided amongst the performers. This was put together to create an honest tribute to the Canadian artist and his intricate and numerous work.

The Art of Tea is a modest-sized cafe that normally seats around 35 people, but without the usual chairs and tables, it can now house around 80. As more and more people filtered into the venue, eager to celebrate, I said a further farewell to the possibility of space. However, it only added to the already cosy, intimate setting in which we had assembled to enjoy the legacy of this great artist.

For many, the talent of Cohen was his ability to elegantly and truthfully communicate the rites of life for which many of us either have or have yet to undergo. The ability of the artists performing, such as Colin Cunningham and Caitlin Gilligan, paid homage to Cohen in such a sincere and heartfelt manner created perhaps one of the most enjoyable events I have had the pleasure of attending this year.

Credit must also be given to the audience. Their desire to focus on the music allowed the renditions of Cohen’s work to fill the room, even more so when many members of the audience joined in, creating a warm and welcoming atmosphere.

It was apt that such a talented person was honoured in this manner and as one of the musicians, Matt Gray, truthfully put it, “You couldn’t do this kind of thing on a Friday or Saturday night out.”

The night was the second of its kind, with the first event held last year after the announcement of Leonard Cohen’s death. Matt Papillon, who organised both appreciation nights stated, “His work will be around forever, he was a one-off and he won’t come around again”

This is certainly true and Leonard Cohen’s legacy is a testament to that fact.