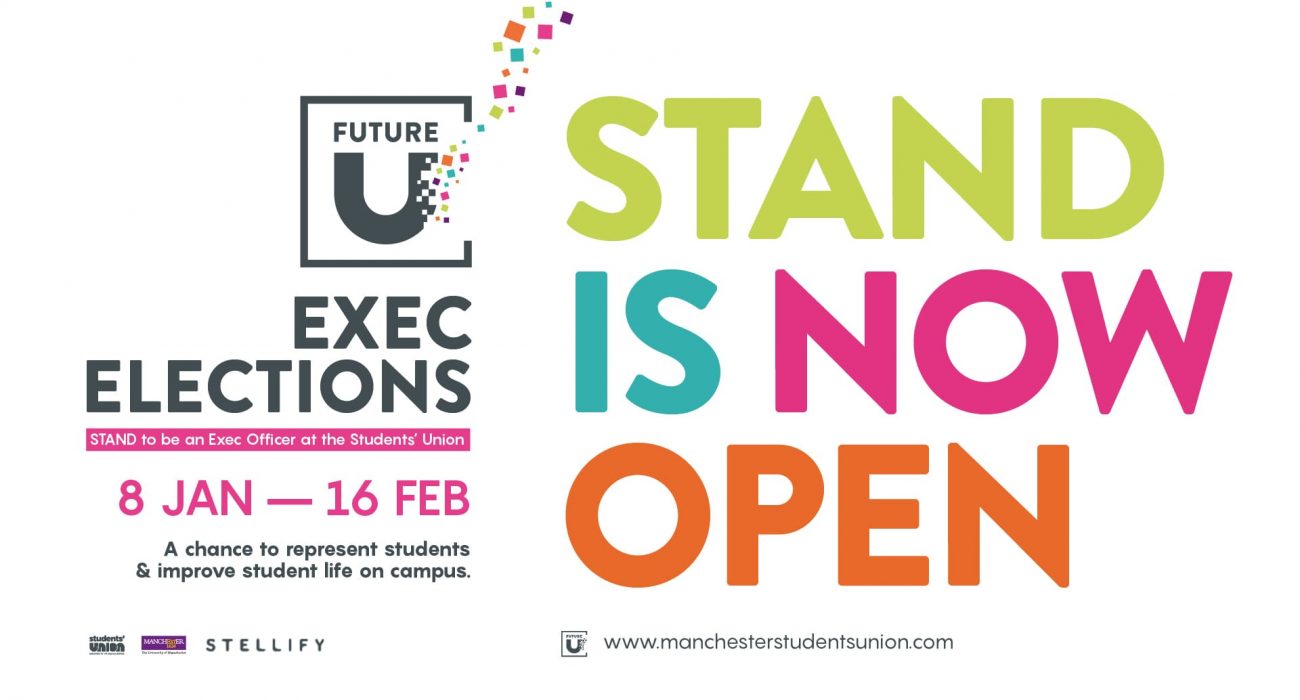 Students at the University of Manchester can now stand to be a Students’ Union Executive Officer for the academic year 2018/2019.

The roles offer a chance to represent the student body and campaign on issues affecting fellow students, as well as working with external organisations in Manchester and nationwide.

The roles also offer networking opportunities through attending conferences and a chance to promote and defend the rights of students with the National Union of Students.

Emma Atkins, having stood as the Exec Officer for two years in a row, re-ran last year because there was a lot of work that she wanted to see finished, but cannot run again this year as Officers can only stand for two terms (she is the only officer of the current Exec team in this position).

Speaking to The Mancunion, Atkins stated that “it was an incredible opportunity — everyone who talks about the elections says this, but as an Officer, I can tell you it gives you skills and puts you in scenarios and opens up experiences that you’d never get in any other job.

“As well as learning communication, teamwork, public speaking, time management and project management skills, you also become a Trustee of one of Manchester’s biggest charities. This means you learn how to be strategic in your thinking, you learn about finance and risk, and have loads of problem-solving examples to give in job interviews.

“Most importantly, you get budget and resources to focus on issues that matter to you, and create innovative new ways to make students at Manchester have the best time possible.”

Following the officer role review at the recent Senate, new roles have been introduced this year.

The first role is International Students Officer, which will mean they will be responsible for the support of over 11,000 students at the university. The role will a oversee cultural exchange, pastoral support, tuition fees and help with areas such as visa support and integration of the International Society with the SU.

The next new role is one derived from the Diversity Officer, which will now become the Liberation and Access Officer which diverges all the Liberation groups of a student at the university.

Emma Atkins has stated that “this Officer will also lead on work for ‘Access’ and support mature, part-time and distance learning students and students with caring responsibilities. The Access part additionally focuses on Widening Participation and Living at Home students, for which the SU and the University have lots of work they do in partnership.

“This Officer will work on policy, campaigns and support for all these students. This name better reflects the work they will do, as the role of Diversity Officer used to also lead on work for international students and postgraduate students. But now we have an International Students Officer and postgraduates go under Education Officer, this new title better applies to the reformed role.”

Finally, the roles of Campaigns and Community Officer have been merged to create Campaigns, Community and Citizenship Officer which will focus on housing, safety and homelessness in Manchester.

With the recent 1.5 per cent turnout in the All Student Vote on the Exec Officer roles, the Citizenship Officer will be responsible to encourage students to vote, as well as getting students to integrate into the local community.

The roles are open to all students and for those who wish to stand would need to have their application form in by Friday the 16th of February which can be found on the Students’ Union website.