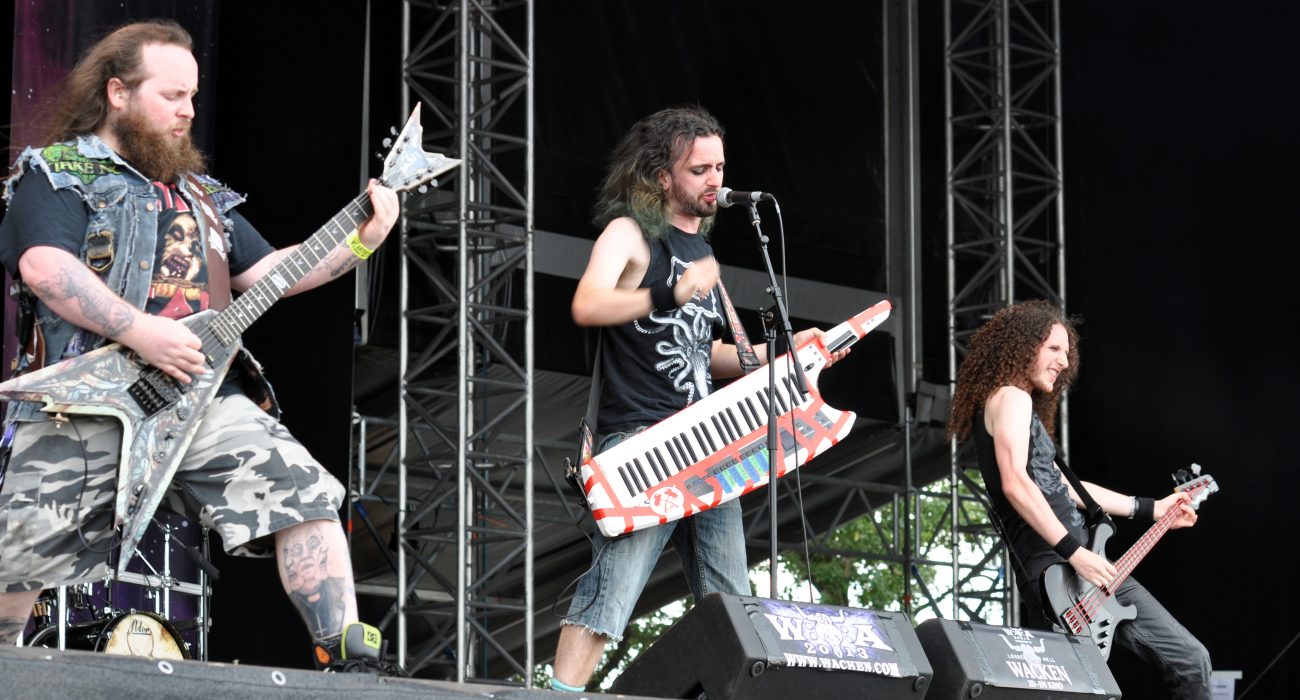 Manchestarrr hosted pirate metal band Alestorm at the Ritz on their Piratefest tour, following the release of their latest album No Grave But The Sea. Alestorm are a drunken band of mutinous seadogs who incorporate a mix of rock and folk-metal styles with seafaring shanties and tales of wenches, mead, and marooning on desert islands (and, occasionally, going back through time to fight Vikings and steal their gold).

Lovers of pirates, metal, and pirate metal came aboard to The Dead Crew of Oddwood and Rumahoy battening down the hatches, before Alestorm opened with their most widely-known track ‘Keelhauled’ (a song about throwing filthy landlubbers overboard pirate ships and dragging them underneath the water by a rope).

As soon as lead singer Christopher Bowes snarled down the microphone, keytar fiddle in hand, it was destined to be a night that would send shivers down various timbers. Quite impressive too, to find the only ever respectable use of a keytar.

Alestorm may be more than a little tongue in cheek but at times the sheer musicality of their performance shines through. They clearly put a great deal of effort into the songs, and as a result the subject matter never grows tiresome. Lead guitarist (First) Mate Bodor is a particular highlight, with genuinely impressive guitar solos. If Clapton is “Slowhand”, Bodor is the opposite, and a great deal more swashbuckling. Bowes sings emphatically too, without ever breaking from seafaring drawl.

Perhaps it works so well because pirates and rock music are a perfect fusion. Think about it: everyone already knows what pirate shanties sound like, and there’s a treasure chest of clichés to play on. The fact that it took four albums for them to make a song called ‘Walk the Plank’ shows there’s no shortage in material. Long scraggly hair fits too, as does, of course, the alcohol. Rrrum all round the Ritz.

Alestorm are never going to be the greatest gig you’ve ever been to, but they might be the most fun. Or boozy. During a rendition of ‘Drunken Sailor’, Rumahoy frontman Captain Yarrface, three sheets to the wind, came back onstage to drain a litre of beer.

Unbelievably, Bodor then performed an entire guitar solo with one hand, chugging a can with the other. Even mead aside, the show was a riot. Entirely unprompted, the whole crowd port to starboard were all hands on deck, rowing in time with the closest thing Alestorm have to a ballad, ‘Nancy the Tavern Wench’.

They could have perhaps upped the pirate attire onstage a little: their clothes were, at best, nautically themed. As a fan myself I can forgive drummer Peter Alcom for wearing a United shirt, but at least throw in a captain’s hat or a parrot on the shoulder whilst you’re at it! In particular, keyboards and unclean vocalist Elliot Vernon looked out of fit with the rest of the band, even if his performance wasn’t. Bowes was barefoot at least.

Their stage presence more than makes up for it though. Bowes is hilarious and foul-mouthed on-mic between songs (“cheer is you stole our latest album”), never letting up the act. Again, though, there is plenty of thought put into it too. The set was well-balanced, at no point the more poppy songs like ‘Mexico’ and ‘Hangover’ feeling out of place with the more rocky ‘The Sunk’n Norwegian’ and ‘Magnetic North’. The crowd seemed to love it from start to finish.

Alestorm left more than a few Rogers jolly: well worth some pieces of eight for a ticket.