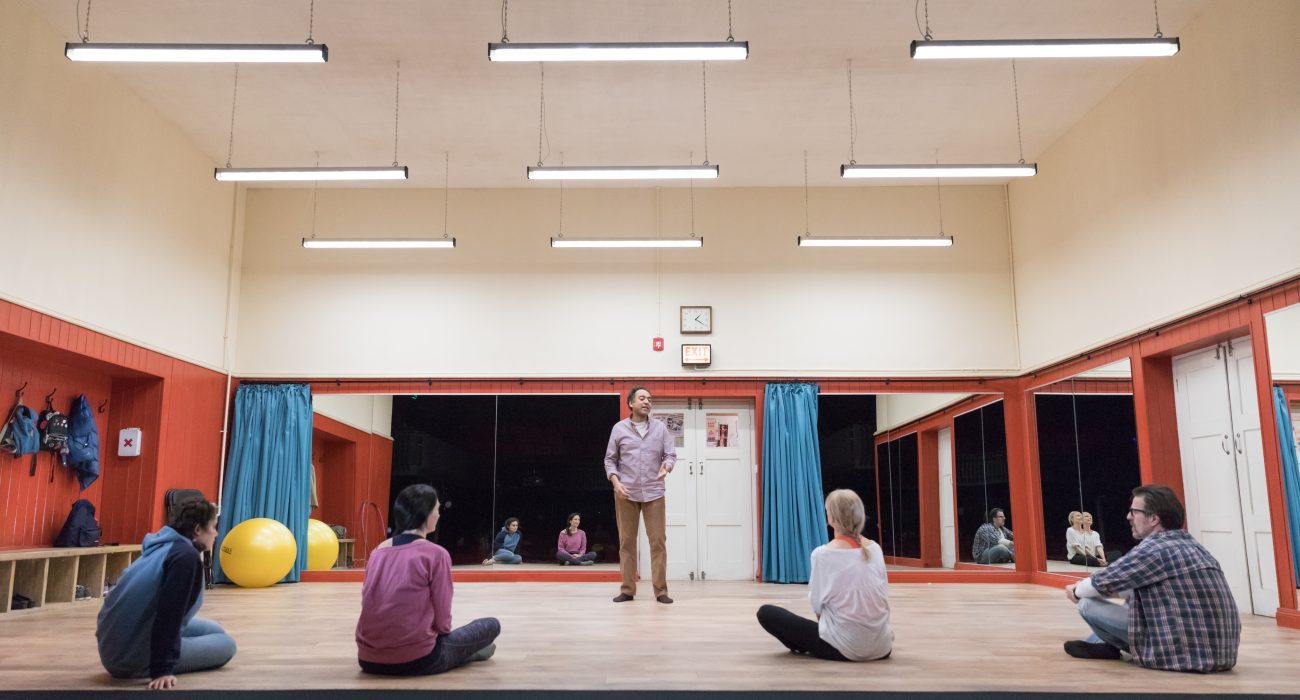 Circle Mirror Transformation is a play that Manchester has been craving for quite some time. Spanning across a six week period, the play is set in a scarily realistic community centre where we meet characters Marty (Amelia Bullmore), her husband James (Anthony Ofoegbu), reluctant teenager Lauren (Yasmin Paige), recently divorced Schulz (Con O’Neill), and Teresa (Sian Clifford) —who herself has also just come out of a relationship —, all taking part in an adult drama workshop.

Marty, played brilliantly by Bullmore, leads the class somewhat recklessly. Marty and James, once happily married, seem to have reached a crossroads and it seems that James has attended the class to support her and their relationship, as well as spare her the embarrassment of the fact that only three other people had originally signed up.

Marty employs the drama exercises to try and get her class to confront their own demons, as well as her own. However well intended this is of her, the little group and its internal politics quickly come to the surface revealing a very flawed, lonely, and lost ensemble.

The character of Schulz, the lonely carpenter desperate for a connection, particularly stood out for me. Con O’Neill played him with such fragility but hope it broke my heart, a standout performance.

The repetitive shopping list, the counting to ten, the moving around the room all echoed the exercises I once did at school — but I feel there may have been too much emphasis placed upon these as opposed to exploring deeper the wonderfully flawed, very much three-dimensional characters which inhabit the space.

However, the subtlety of the storytelling and the mood it casts in the theatre is remarkable. Once our group of non-sequiturs finally are able to count to the elusive ten (which they’d been attempting since week one) instead of joy and laughter of finally being able to reach it, they lie in awkward silence.

Described as “a Chekhov of our times” by Walter Meierjohann (Artistic Director of theatre at HOME), Annie Baker’s writing is incredibly delicate. What is disguised as a typical awkward drama workshop is actually a study of flawed human nature. The complexities of modern lives and emotions stand out. The quiet nature of the play gives off a European feel to the production, the minimalism of the piece amplifying its characters and their circumstances.

One aspect that must not go without note is the incredible work of lighting designer Jack Knowles and designer Samal Blak. The authenticity of the set completely blew me away. The way the overhead lights flickered and murmured to life each time the characters returned to the stage took me straight back to my own experiences in taking part in workshops such as those.

I particularly loved the fact that you could see the reflection of audience members in the mirrored walls prying into the lives of these five individuals, who don’t know they’re being watched.

Circle Mirror Transformation is a performance which is rich in character and feeling, brilliant performances and sadness. A quiet must-see.

Circle Mirror Transformation runs until March 17th at HOME. Tickets can be purchased from here.