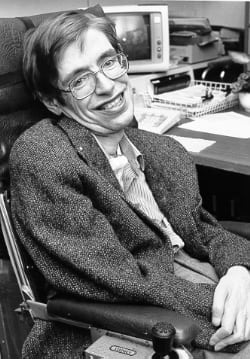 A brief history of Stephen Hawking

Through this fierce and relentless rebuttal, Hawking transcended the ‘rational’ and ‘plausible’ to defiantly achieve scientific greatness. In doing so, he showcased the enormous capability of the human mind and inspired millions.

The former Cambridge Lucasian Professor of Mathematics, a role also previously held by Sir Issac Newton, authored the bestseller ‘A Brief History of Time’ and has penned many scientific theories and discoveries in his time, including ‘Hawking Radiation’, where black holes leak energy. This phenomenon occurs close to the edge of the black hole, in an area called the event horizon and is caused by quantum interference. Hawking, along with Roger Penrose, also showed that if the ‘Big Bang’ occurred, it would have originated from an infinitely tiny point known as a ‘singularity’.

He theorised ‘mini-black holes’, which form during the ‘Big Bang’ and eventually lose mass and disappear in an energy-releasing blast. He became embroiled in a disagreement with Leonard Susskind known as the ‘information paradox’. Hawking argued ‘information’ pulled inside a black hole such as particles or light is forever lost if that black hole is destroyed. But eventually, Hawking accepted that information was not permanently lost.

University of Manchester Professor Brian Cox said: “He (was) a truly brilliant scientist and also a brilliant communicator.”

So farewell Professor Hawking, you are a real inspiration and an irreplaceable loss to the planet. In the words of Barack Obama: “Have fun out there among the stars.”