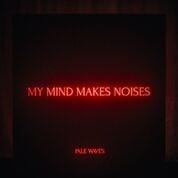 Romanticism seems to be undergoing a huge revival in pop music and at the helm of this movement stands Pale Waves, the indie-pop foursome from Manchester. For a while now, the group have been generating buzz with their seamlessly juxtaposed blend of woe-is-me lyricisms and shimmering electropop. We’ve grown accustomed to Pale Waves only in short bursts through handful of singles and an EP before this – so how well do they fare on a 14 track album?

Firstly, the production on My Mind Makes Noises is flawless; Pale Waves have managed to curate a vivid soundscape that would not seem out of place as the soundtrack to a cliché teen romance movie. Opener ‘Eighteen’, with its pulsing synth rhythm and triumphant guitar strokes lays on thick this notion of a blossoming romance. The amplified backing vocals on the line “I finally felt like I could feel for the first time” is a subtle but powerful way of conveying the lovesick passion that front woman Heather Baron-Gracie continues to dish out across the album.

Long time fans of the band will be pleasantly surprised at all the tweaks and modifications that tracks such as ‘There’s a Honey’ and ‘Television Romance’ have undergone. The songs sound dreamier, sharper even, with an intoxicatingly sweeter edge that showcases how dedicated Pale Waves are to perfecting their work. Conversely, those same fans who have been here from the start might be miffed that classics such as ‘The Tide’ and ‘Heavenly’ have bit the dust.

But where Pale Waves fall short, and what is of significant detriment to their album, is a lack of exploration in to themes beyond melodramatic teenage heartbreak. After 14 songs (equating to just under an hour) of Baron-Gracie whining about failed relationships, distinguishing between tracks becomes nearly impossible and the formulaic nature of their song writing becomes abundantly clear.

I hate to say it, I really do, but there are certain parts to this album and this band that feel like a carbon copy of The 1975. It’s a comparison that Pale Waves have been eager to escape, not out of disdain for their label mates but more so they can forge their own identity. Unfortunately, this is only achieved in moderation. The poignant album closer ‘Karl (I Wonder What It’s Like To Die)’ whilst sincere in its motives bears an uncanny and uncomfortable resemblance to The 1975’s ‘Nana’ – an acoustic ballad that appears at the end of their 2016 sophomore release. This may just be coincidental, but it’s enough to make you squirm with gritted teeth.

Singing about lost lovers is not exactly unchartered waters for a pop band but to continually lament on the past is not only toxic for oneself (Heather, take note), but also imposes limits to what could have been an otherwise enjoyable debut. At its best, it’s a shimmery, nostalgic experience; at its worst, it’s repetitive and tiresome. Pale Waves have certainly come a long way, but what a shame that originality was allowed to fall by the wayside in the process.