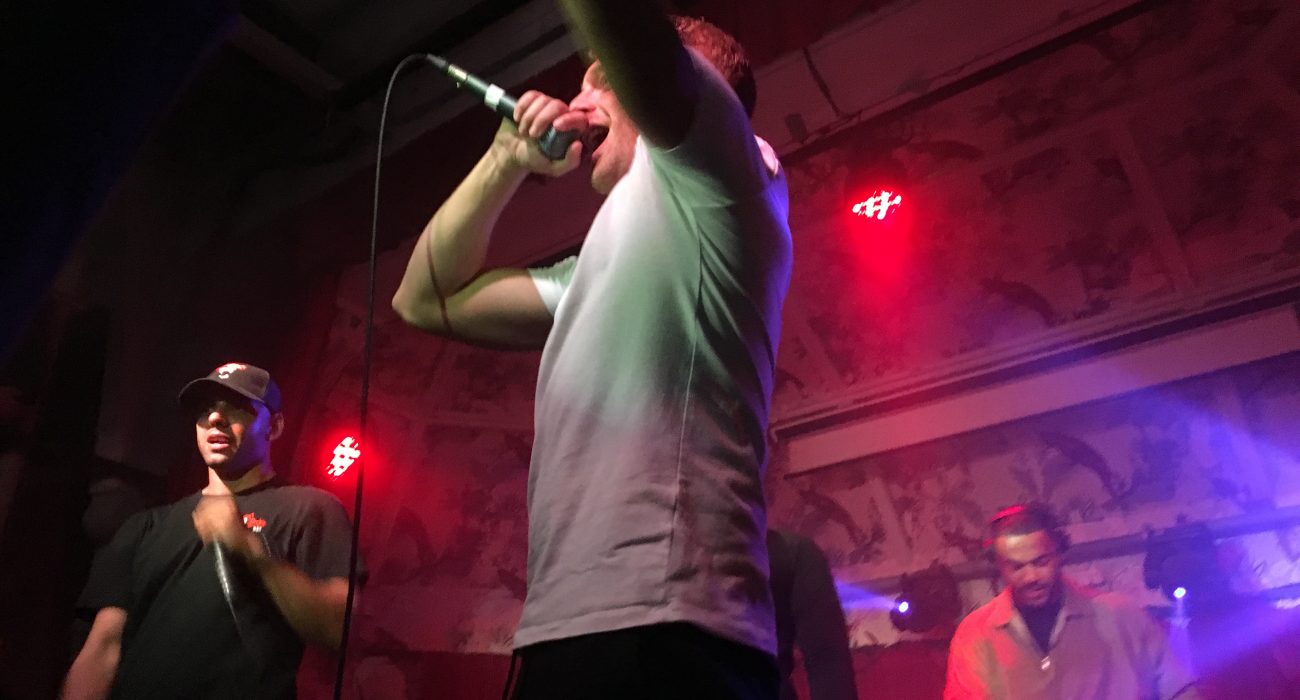 In Conversation with The Manor

The Manor are a three-piece rap group, born and raised in South London just over 10 years ago. Their style is unlike any other, representing ‘lad culture’, social inequalities at home, and bringing a refreshing alternative to the ‘xanned-up’ mumble rappers of today.

While waiting by the backstage door of The Deaf Institute, I surveyed the punters that were slowly filling the worryingly small dance floor; I had seen videos of their previous gigs, and I felt my fear was justified. This, after all, was the same fan-base that had set the record for the most beer sold in a night at the O2 Academy Islington and required police action to disperse after a sold-out gig at Koko in Camden.

The collecting audience was made up of all of God’ s rich tapestry: the 45-year-olds who had presumably told their wives they were working late, the 16-year-olds coughing on their appallingly rolled ciggies, and of course the short back and sides, Stone Island flaunting ‘boiz’. With the insane levels of merch on display, and the audible anticipation you would expect at a Justin Bieber concert, I was lead up some stairs to meet the group.

Johnny Dutch and Danny Graft have been friends since school; inspired by the grime artists of their youth, they would spend “hours taking the piss”, insulting each other to a beat, and forming their real, down-to-earth style. Scotty Stacks, the third of the trio, “slipped in” after his cousin made a backing tracking for the other two; all it took was an introduction at a party, and the rest, as they say, was history. Unfortunately, Scotty couldn’t make the interview on account of his successful business — Stacks by name, Stacks by nature.

Their success is a testament to what can be achieved when young artists put their minds to “not really wanting to get real jobs.” While at university, they were inspired not only by the wealth of UK rapping talent of the noughties but also the indie-pop scene with bands like “Razorlight and Babyshambles.” This lead to performances in small venues for several years, until, in 2011, they dropped their first release ‘Welcome to The Manor’. Since then they have built a hugely loyal fan-base, and had the “freedom to not be in one place”, touring regularly across Britain and Europe. They could be of inspiration to any of the musical talents studying at Manchester at the moment, undecided as to whether to commit wholeheartedly to this incredibly tough industry.

They have plans for a new album next year, with the goal being more of an ‘indie-wave’ sound. As many of their songs are “soundtracks to a holiday”, the majority of their writing occurs in the winter months. They are spurred on in this period with “inspiration from the summer” and their manager consistently asking (with encouragement) “where’s the music?” Their lyrics are so incredibly relatable, that while on the tube a few months ago, Johnny was stopped by a 65-year-old man, who said he loved what they were doing and to “keep it up.” They rap on a range of topics, from the joys of the weekends to familiar female relations; the basis of the latter seems slightly shady, with Danny telling me he had “more stories about how I’ve fucked it up.”

I left their changing room baffled by how such normal, friendly guys could be such superstars to their adoring fans. Then the music started.

Picture being placed in the England stands just after a World Cup final victory, except no-one has any tops on, and it’s 35 degrees, you’d come to about halfway to the experience I had. There were arms, beer, and man boobs flying everywhere — an every-man-for-himself deathmatch soundtracked by their music. I should note, my description of the sheer quantity of male parts is not accidental, as the female fans could probably be counted on two hands and maybe a foot.

The energy in the crowd was unparalleled to any concert I’ve seen before, with the three showmen on stage whipping them up into a manic hysteria. The love they gave out, was doubled in reply, every one their lyrics, echoed back two-hundredfold. Whatever voodoo frenzy they had invoked clearly worked, as the dance floor stayed rammed for the full hour-and-a-half that they had on. It was hardly surprising that the bandmates’ mums, who had “insisted on buying tickets” to the Roundhouse in London, had made this their only commitment to seeing them.

I would say there is an important distinction to be drawn when it comes to The Manor: listening to them can be done by all, but going to their gigs? That takes balls (figuratively and slightly literally).