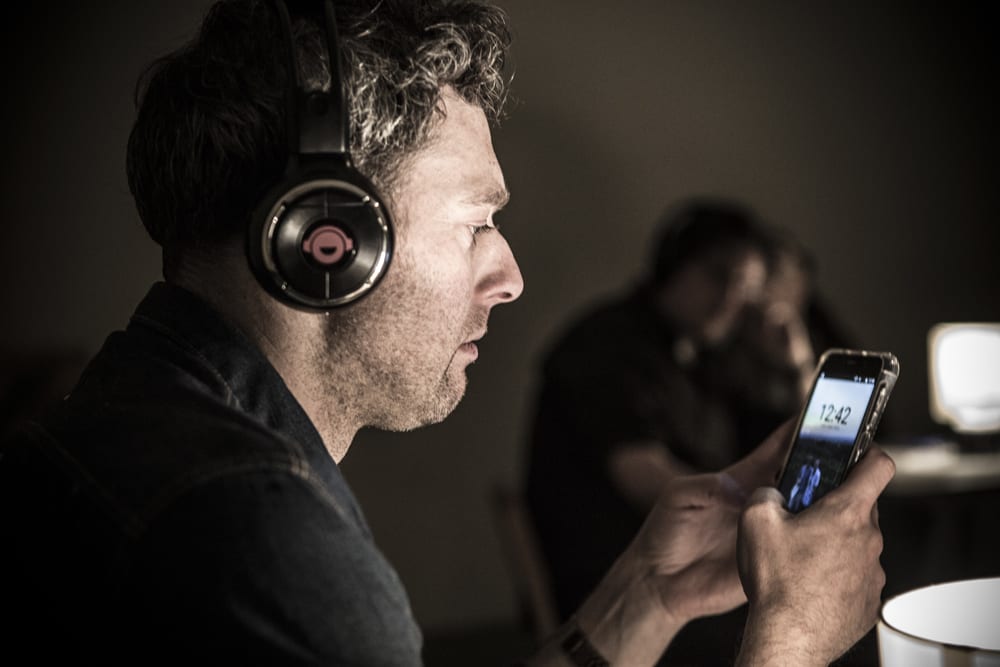 ‘I could be anybody.’

These were among the first words in Dante or Die’s breathtaking ‘User Not Found’. A lilting sentence heard, individually, through dozens of sets of headphones. Each audience member was seated in Pot Kettle Black, a cafe in Barton Arcade, as if we were there for a latte instead of a show. Yet we were each given headphones, a smartphone with an externally controlled screen, and the sense that this would be unlike any theatre we’d seen before.

It wasn’t immediately evident who the performer was, or if there was one at all. Through the headphones began a rising crescendo of cafe sounds; the familiar clink of ceramics, the hiss of the steam arm, some jaunty music. Then, softly, a murmuring voice emerged from the fray. ‘I could be anybody’, he observed, studying the others in the cafe. Terry O’Donovan, who had a moment ago been sat among us, made himself known. People-watching and distractedly looking at his phone, we shared his sense of ease. This was shattered, however, when his phone began to buzz and so did ours. It emerged that his recent ex, partner of nine years, Luka had just died.

Terry didn’t know how to feel. Nor did we. We learned that despite their recent separation, Terry had still been left a monumental task; that of deciding what to do with Luka’s digital legacy. Twitter, Facebook, WhatsApp, everything. The app used for this task, Fidelis, seemed so disconcertingly plausible that I googled it after the performance. It was an invention of Dante or Die – but as the scale of people’s online legacies become equivalent to their material ones, perhaps it won’t be a fiction for long.

We experienced Terry’s emotional tumult, encapsulated in the social setting of the cafe, a world in which people are both isolated from and in communion with each other. He walked among the tables, occasionally interacting with the audience, but crucially emphasising the emotional barrier between us. This artifice was underscored by constantly shifting images on our phones. Often we were shown what Terry saw on his own phone, trawling desperately through Luka’s social media, watching Laurent Mercier music videos (whom Terry hated, but Luka had loved) and dwelling on that all-important ‘Delete All’ button on Fidelis. Yet, the flawless technology also frequently transitioned into a visual representation of Terry’s inner turmoil. There was a pulsating, unidentifiable tearing on the screen, and a blurring, as if the screen was suddenly flooded with water. My personal favourite echoed Terry’s troubled dreams; an animated snail stating, with cool detachment, that ‘death is a story told by the living’. The absurdity only heightened the poignancy of the piece.

O’Donovan’s ease and charisma was compelling from the first, and he skilfully navigated the emotional complexity of Chris Goode’s writing. Under the artful direction of Daphna Attias, and utilising a wealth of talent in terms of technology and sound, the piece was utterly unforgettable. In the ‘cafe which is a metaphor for life’, it is impossible to know what others are going through.

After all, it ‘could be anybody’ experiencing this pain, and this digital dilemma. It’s a dilemma those who witnessed ‘User Not Found’ will be considering for a while.