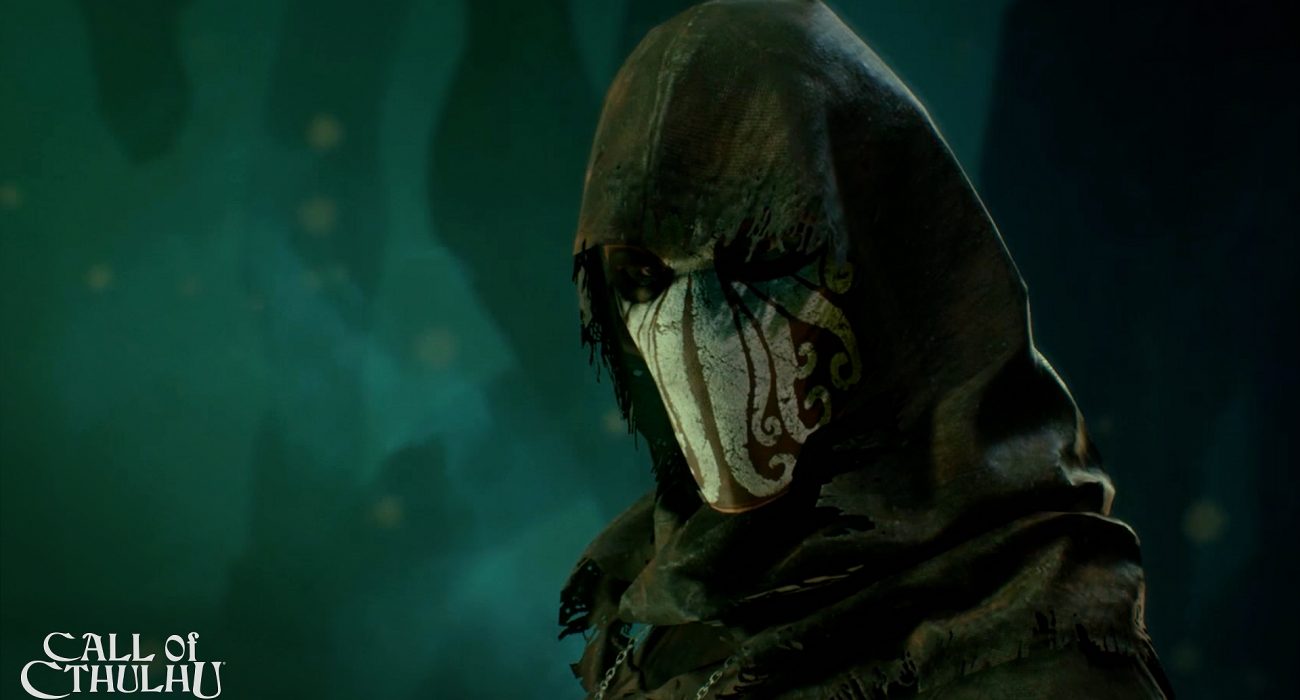 On the 30th of October, Cyanide Studios released Call of Cthulhu, an (obviously) Lovecraftian adventure horror video-game, promising to be an official adaptation of the tabletop roleplaying game of the same name. Not only have I enjoyed reading Lovecraft’s work, but I also own the tabletop RPG. At a steep £40, this game is actually more expensive than the core rulebook it is supposedly based upon – but at least I don’t need friends for this. Though at a mere seven hours of play, and a lacklustre experience, was it worth the money?

The game sets you as private investigator Edward Pierce, a WW1 veteran lacking a sense of purpose and a struggling alcoholic. Your nightmares from the war are starting to change into something else, as a nameless and unfathomable voice calls to you. You awake in a damp and dark cave, as faceless cultists perform a ritual in the distance. Shortly after you wake, a man arrives through the door with a painting and the story of a dead woman, Sarah Hawkins, and asks you to find out her true fate.

If this game nailed one thing, it was the atmosphere. Every dialogue and every location ran the spectrum of unwelcoming to downright freaky. This was unintentionally assisted by some awkward dialogue where the mood shifted quite unnaturally from calm to intense, but overall interactions with characters fairly true to the cosmic horror vibe. Everyone seemed to be hiding something, and even those you could trust would shatter whatever hold you on reality you had left. Some parts of the game really had Pierce in an existential crisis and you were living it with him. For some characters, it wasn’t simply a case of being prepared for them to lie to you, but rather you started going through scenario after scenario in your head: “Why is he alive? Does he know he shouldn’t be or is he lying? Has somebody replaced their body? Is this a dream? Or did I dream them dying?”. If you were really trying to figure it out, you couldn’t – my mind was doing laps. In that respect, it was absolutely a great cosmic horror romp.

As for the rest, Call of Cthulhu’s gameplay primarily consists of exploring rooms and environments, which will present you with clues and evidence. These appear as white spots you can interact with, but some additional items are very well hidden. You would only know about these additional items through the question mark that appears at the bottom left of the screen when you are in their radius. It’s a handy feature, but infuriating when you just can’t find them. Go away! I don’t want to know I’m stupid!

Conversations with characters take the form of a dialogue wheel, where certain options only become unlocked if you had found particular items or met skill requirements. The Skills section of the game really piqued my interest early on, seemingly allowing you to develop in a multitude of direction; someone that investigated by punching; by understanding motives; a smooth-talking for information, or was just straight up good at investigating. A few skills stood out among these – Spot Hidden, Occultism, and Medicine. The first of these just straight up allowed you to find more clues, so I maxed this out. The latter two, however, could only be levelled up by finding books during your playthrough. While this gave you a real incentive to search through each environment and appreciate it to its full extent, there was the flipside of times when you were just walking up to everything and waiting for white spots to appear. 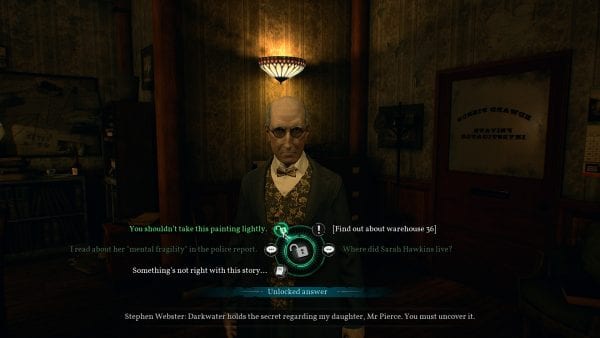 What was noticeable during my playthrough, however, was how meaningless these skills began to feel. Maybe I’d luckily punched in the perfect ones but I don’t feel as if I missed out on much content during the game. Often I was able to discern some information using skills I had hardly touched during the game, with the only exception being my inability to lockpick doors twice in the game. This extended to the dialogue, as finding clues would open up so many conversation topics that I really started to question the point of the other skills.

None of the features in the game feel fleshed out. Coming fresh from a playthrough of Sherlock Holmes: The Devil’s Daughter released two years prior (a title I believe gets totally undeserved hate), it was a real shame to the see all the wasted potential in Call of Cthulhu. The game never really allows you to piece together the smaller findings yourself. Reconstruction scenes are merely a case of interacting with an item and Pierce drawing the conclusions for you. Puzzles themselves, in a game about an investigation, are so rare that the change in pace jolts you. One particular puzzle requires you to find a drawing of an item on the floor, then you go find it. You will never be stuck in this game, it’s impossible.

But this is a radically different game to what was speculated. From the list of expected elements, there are no side quests; half the promised hours; no ability to form an ‘investigation team’; and no phobias. While there are four endings, I unlocked three by playing the game pretty haphazardly. At the end of the game you are given a dialogue wheel and asked what action you will take, so you can just reload the autosave before the end and try each one because nothing changes through the rest of the game of any significance. The ‘secret’ fourth ending requires ridiculously more work than was put into it.

For the developers and publishers to call this the official adaptation of a tabletop game, implying a deep sense of roleplaying, makes you wonder if their sanity was lost to the Elder Gods too. Hell, maybe we should just stop resisting too.

Call of Cthulhu is available on PC, Xbox One and PS4.