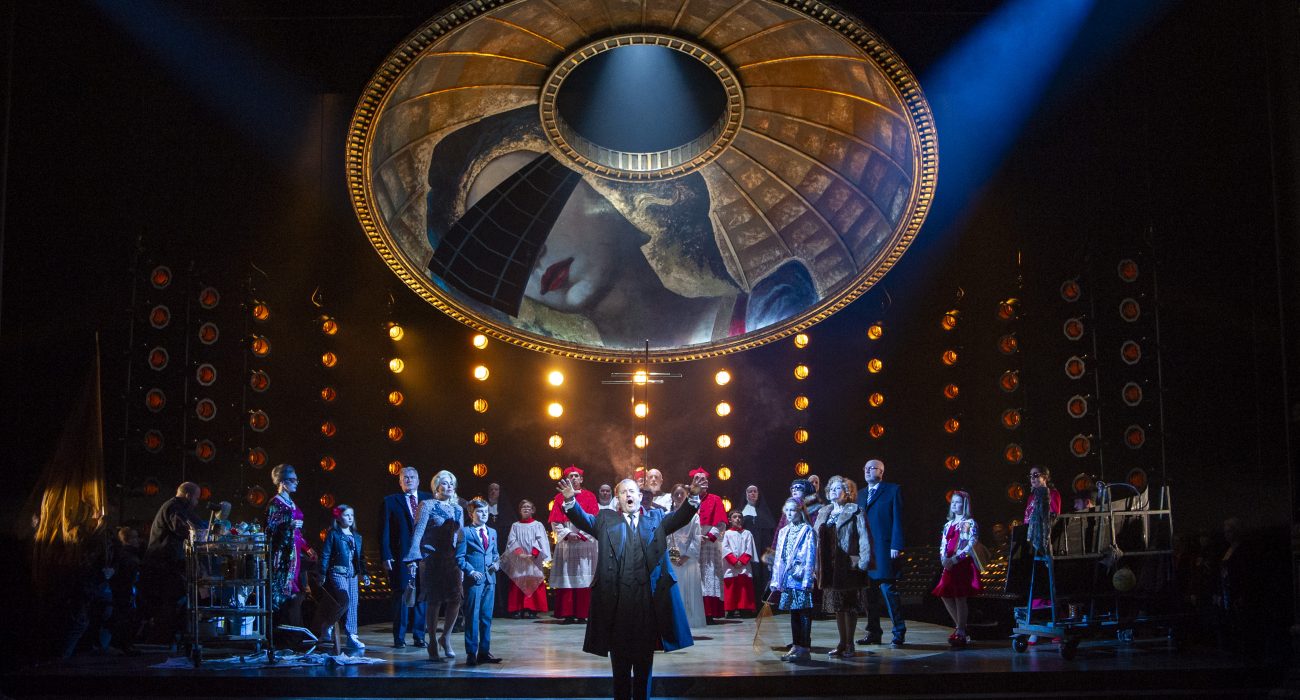 ‘Tosca’ tells the tale of a singer and her artist lover who get involved in the escape of a political prisoner in 19th Century Rome, which ultimately leads them to their tragic deaths. Puccini did not include an overture in ‘Tosca’, so, as the music suddenly erupted, we saw Angelotti (John Savourin) hanging down from the roof on a rope in his escape from imprisonment.

The fast pace and immediateness of plot is a theme throughout this production, its pace never allows for a dull moment and would, in many respects, be an exciting production, even for those who have little experience with opera. In particular, the inclusion of two 20-minute intervals lends this opera towards being a great entryway into this style of theatre, as each act is no longer than 45 minutes.

The lighting design (by Lee Curran) had to be a stand out feature for this production. The set consisted of a large church dome with the image of a woman painted onto it and a hole through the centre. This central hole was the source of much of the lighting, creating the impression of the interior of a church and a sense of secrecy which was carried throughout the show. This main source of light, through the gap in the dome, created the impression of a God, forever watching and even judging the events as they unfurled.

The set design (Tom Scutt) was both innovative and effective, the dome was surrounded by columns of stage lanterns, mimicking the church pillars. The brightest point in the show was the final moments, where, as the piece reaches it’s climax, Tosca fell through the eye of the dome and the lights were on full brightness, blinding the audience and reminding us once more that God was at play in this production — that Tosca was falling into heaven. In a large semi circle at the back of the stage were stands of candles surrounding icons, specifically the Madonna. The candles were ‘lit’ for much of the show, creating an ever presence of the church within the characters’ lives.

The setting of this piece felt somewhat confused, while this opera is historically set in the 1800s, this particular production did not adhere to this. While this is not in itself problematic, there was such a mix of time settings offered that it left an incoherency to the production. There were laptops used and headpieces for the aides of the head of state, and yet the chorus entered wearing costumes that would not have been out of place in the 60s. While this was certainly confusing, luckily this did not take away from what was largely a very enjoyable evening.

Particular stand out performances were by Giselle Allen as the over the top diva, turned tragic romantic lead, Tosca. Her aria brought tears to many members of the audience. In the first act, the Sacristan, played by Matthew Stiff, created a slightly bumbling, comic version of the character that was an absolute joy to watch. His projection wasn’t as strong as some of the other performers, which lead to his voice getting lost in a duet in the first act, which was simply a shame, given the strength of the rest of his performance.

Overall this was an excellent show that I would recommend to opera lovers and newcomers alike. From it’s sudden opening to the emotional ending, there was not a low point in the show, from the performers, musicians, or the direction (Edward Dick). While opera often verges on the overdramatic, which this production certainly toes the line with at particular moments, this did not effect the ultimate enjoyment of this production.

Opera North is also at the Lowry with ‘The Merry Widow’