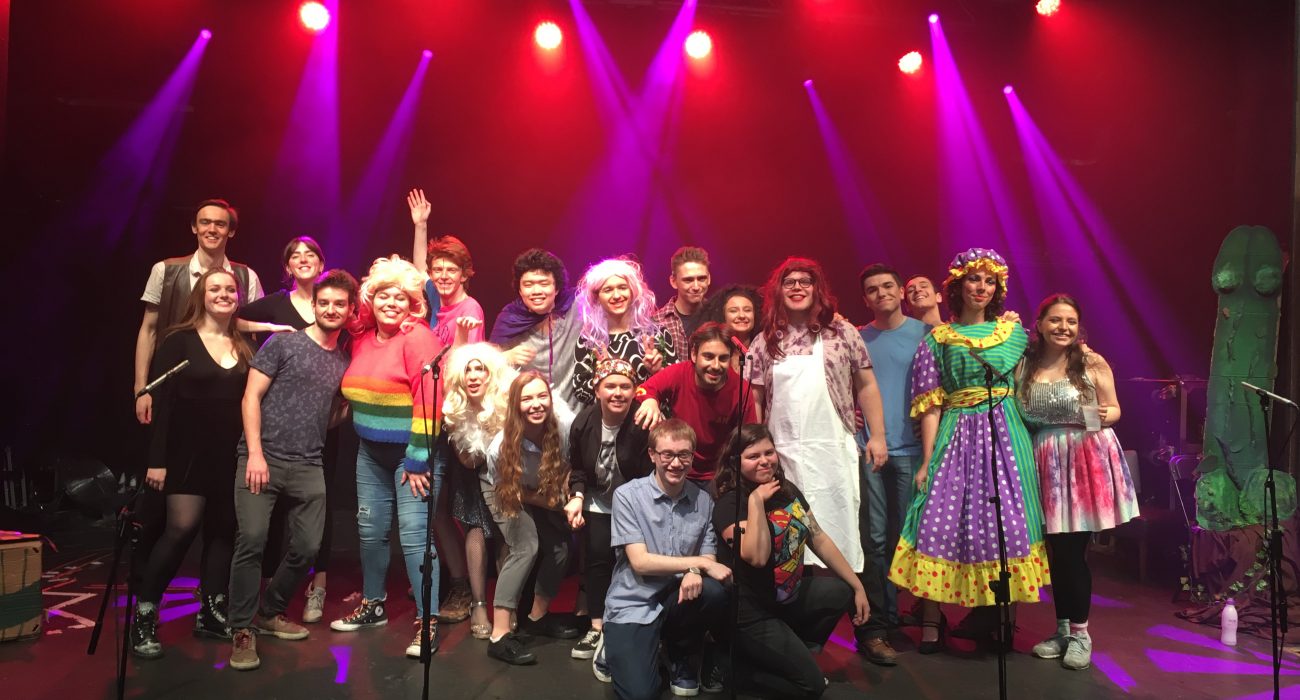 Review: ‘Jack and the ‘Beaker’stalk: The Panto’

The Panto Society retold the story of Jack and the Beanstalk, mashing it with Tracy Beaker and the Dumping Ground to create a highly unique production that included crossdressing, a dame, and the silver-haired fox himself, Phillip Schofield. Raising money for the Manchester Central Foodbank, the Panto Society put on an entertaining and refreshing performance of a classic fairy tale.

The entire cast reacted well to the inevitable hecklers and although some of their more controversial jokes didn’t land, what made the panto entertaining was the mistakes and ad-libs. Although it took the first half of the show for the humour and jokes to really make an impact, by the end the audience were being entertained by a horse with a sign saying ‘cow’, dance routines to ‘Hairspray’, and the unruly character of Tracy Beaker (Penny Meek). Tracy and Jack (Will Venton) interacted well together, playing off each other and helping to set the tone of the show.

Praise must be given to villain ‘Giant Willy’ played by Ollie Hyde: a bad-tempered giant looking to rid himself of his annoying and spoilt daughter, Justine Littlewood (Gemma Mountain). Hyde’s performance was exceptional, he showed an ability to portray a major character and improvise his way out of sticky moments, giving a performance that was funny and memorable. Giant Willy was comical, excessive and his accent seemed to change ever so often from Scottish to Welsh with a hint of Irish.

Of course, it wouldn’t be a panto without the panto dame, Elaine the Pain. Rory Harris gave a great performance of the social worker who only wants to find romance, specifically with his co-star Simon (Marco Giorda). Possibly the funniest couple on the stage, Harris and Giorda embraced the panto spirit and gave the audience a good dose of comedy and farce. As with student pantos, the production was raunchy and so pun-filled, you cringed every time one was mentioned. From Brexit to Fallowfield, the Panto Society did not let its audience down, cramming in corny one-liners and double entendres.

Congratulations to the directors Alyx Adams and Adam Freedman, and the cast and writers. This was an enthusiastic, if disjointed story of: a boy rescuing the love of his life, a girl who is swept off her feet by a guy with an axe, and a giant and his daughter who are arrested for failing to obtain planning permission but their fluffy handcuffs break and so they eventually escape. Oh, and the cow who stayed true to her identity, even if she was a horse.

Was the show entertaining? Oh yes, it was! Will I  be waiting to see what else the Panto Society has in store? Oh yes, I will!