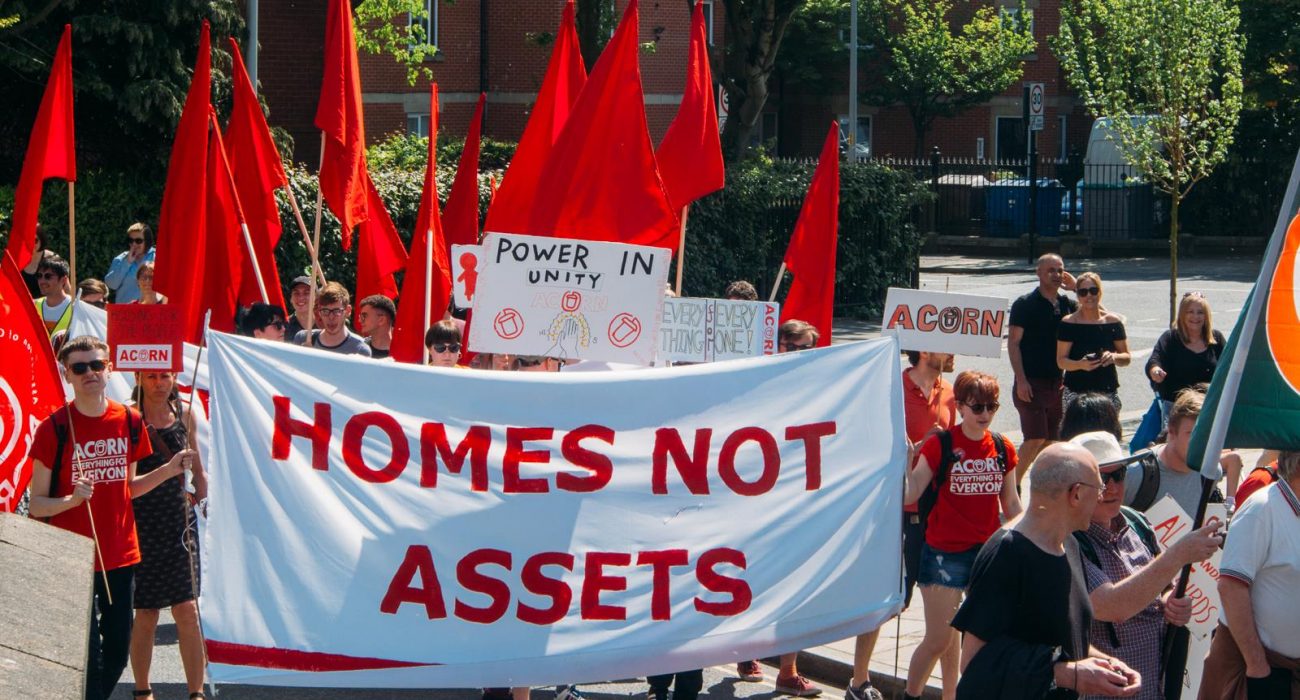 In the UK alone, approximately 4.5 million households rent their homes privately, and for those that do, renting can come with its difficulties. That’s where ACORN come in. Based in Manchester as well as several other UK cities, ACORN are a tenants union dedicated to improving the conditions of privately rented properties and fighting for the rights of those who live in them.

Originally founded in Bristol, ACORN’s Manchester Branch was launched just one year ago and since then, the group have taken on disputes nationwide. In November the group occupied Natwest’s Market Street branch in protest of it’s ‘No-DSS’ policy which prevents landlords from renting properties to tenants in receipt of benefits. “We’ve done the same thing with Santander and TSB before and we’ve won both times for the same issue,” says Tom Crosher, ACORN’s delegate for the Manchester region.

“Last year we won 32 cases, our biggest case was an entire tower block that had awful issues, the locks weren’t working, people could just open doors that should have been locked, we had a big crime problem within the tower block but once [the tenants] got in touch with us we did a dual action, we went and talked to the letting agents and picketed outside the repair company and both immediately said ‘yeah, we’ll sort this out’ and they’ve got repairs done.”

So what has lead to the deterioration of privately rented properties in the UK? Tom puts it down to the lack of government funding for councils. “But it’s not always going to be the council’s fault,” Tom explains, “they’ve had a lot of funding stripped off them, there’s things like landlord licencing that have just been brought in in Rusholme and areas of Moss Side where you have to sign up with the council to rent out properties, [but] there are a lot of places there that aren’t landlord licensed and the landlords get away with it because the council don’t have the resources to go and check this stuff out.”

Laura Dickinson, a student and coordinator for the upcoming Student Branch told me that: “I would also attribute it to the housing crisis in general and the issue of short term tenancies, so if you have a short term contract of 6 months or a year, your landlord knows they can put off repairs and not offer you that tenancy again.”

Laura goes on to explain that unpaid deposits, unfinished repairs, mouldy conditions are all things that ACORN can assist with and that when it comes to fighting for tenants, “strength is in numbers”. “What we find is that tenants don’t really have much power, they can keep pestering the letting agency to fix whatever’s wrong but a lot of the time these emails are just ignored. What we can do is publicly picket the office, which is obviously bad for business and we can put pressure on them to fix it.”

She also points out that students are a particularly vulnerable group when it comes to private renting as they have little knowledge of their rights. “A lot of students are coming straight out of halls and maybe that’s their first time living away from home which doesn’t really prepare you for the private rented sector,” Laura explains. “Landlords really do take advantage of the fact that they know that students haven’t got much knowledge, a lot of students don’t know what a deposit is, I’ve spoken to some students who don’t even know what a tenancy agreement is.”

From experience going door-to-door and speaking with student renters, Laura says that many students are apprehensive about reporting issues like broken heating because they are unsure if they are important enough. “That’s health and safety” she says, “you can’t be in the middle of winter with no heating, a lot of what we want to do as a student branch is in terms of education because at the moment landlords are really capitalising on the fact that students really don’t know their rights.”

ACORN advise first-time tenants to contact them if they have any questions about renting. You can email ACORN if you want to double check a letting agent, and they’ll let you know if they recommend them.  “Do other research and look at reviews and really properly research the agent you’re going with, when you go to a house viewing you should be asking questions, take a look at the general state of the property, make sure your deposit is in a deposit protection scheme, and even if you’re just asking the right questions it shows landlords you know what you’re talking about and you are less likely to get ripped off.”

To get involved with ACORN or to find out more, email them at [email protected]