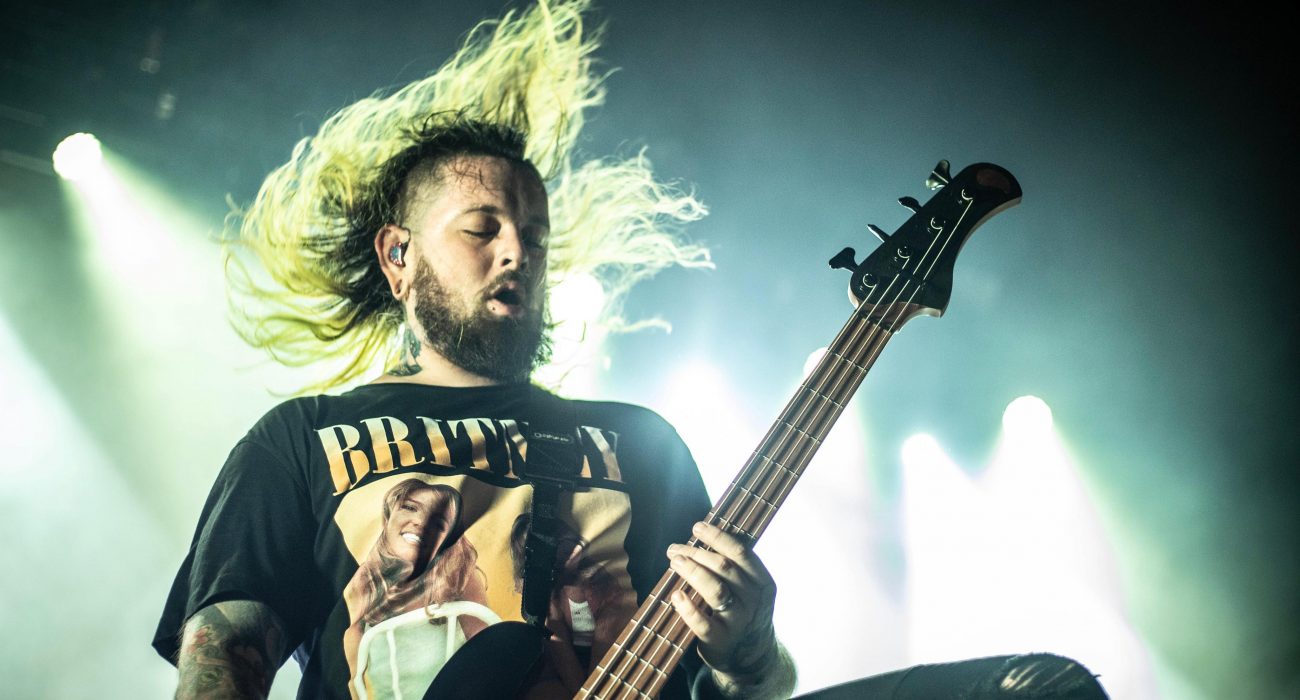 In Conversation with Bury Tomorrow

Metal core is a genre that is generally not for the fainthearted. Powerful, emotive, and surprisingly self-aware of its comedic value at times, it is thoroughly complex and has a fun soundscape to explore. It was just my luck then, that a certain quintet from Southampton would be visiting Manchester for their Black Flame tour. I was eager to interview and catch up with the latest from this evolving band and see what they had to say about their latest creation.

It’s a cold mid-December afternoon when I finally get the opportunity to chat with Dayvd Winter-Bates about the latest instalment in the wild and surprising journey of the melodic metal core band, Bury Tomorrow.  I was intrigued to hear about the contributions and styling that would be discovered in Bury Tomorrow’s set later that evening. However, first, we had to negotiate the stairs to the basement area where the interview would take place, just beneath The Ritz in semi-darkness. Fitting, I suppose, for a band who relish in the light and dark of their content. Davyd laughs “I think this has to be one of the strangest places for an interview” as we settled into a corner and began to discuss the tour.

Manchester was their fourth date of the tour and I immediately delved into his thoughts on the city. This garnered a reaction that you could say was fairly enthusiastic: “Manchester is rad, we’ve never had a bad show here” he recalls. Davyd was quick to add “Although I have to admit that shows in Scotland are just crazy, they’re always ready to go.” It seemed like the tour as a whole had gone down really well as he remarked: “We’ve been on tour in Europe for three weeks and it has been awesome. The crowd really don’t take much coaching; they’re always as keen as we are.” I did not doubt it for a moment. I had passed a number of fans eagerly waiting outside just beyond the tour bus. From the discussions outside it seemed clear that fans were divided on the direction of their latest release Black Flame so I was quick to ask what had changed moving into their new album.

“We have really refined what we were doing with this latest album, I mean we call it ‘trimming the fat’ but it kind of means we’re accumulating new influences with everything that’s worked from our previous albums,” he clarified as we discussed the journey the band had musically moved along since the album’s release in July. “The moment we let go, that’s when all the ideas came flooding towards us so that’s how we created Black Flame,” he explained citing that his favourite track of the tour had to be the title track due to the resonance it had with the experience of touring. It was also revealed that the band would be exploring more content around the album in 2019, potentially playing a number of festivals across the UK which Dayvd could not disclose at the time.

Shifting topic slightly I asked him about their interests in the nightlife in Manchester considering the prominent and diverse music community that can be found across the city. “We used to DJ at a night called Deadbolt at Sound Control. We absolutely loved those shows!” He continued “There’s a really bad tiki bar near here that I always somehow end up in, it’s really funny.” Discussing the night ahead it seemed that the band was extremely excited to check out Rebellion for their DJ set later that evening. I commented that it was nearly impossible to leave either club without dirty shoes or dresses due to club floors. This seemed to amuse the band and Dayvd laughed: “Well I wouldn’t know…I’ll be wearing my Britney Spears shirt and that alone is enough to piss someone off…but who knows, maybe we’ll have skirts for the next tour,” referring to the hardcore community of metal enthusiasts who remain divided on Bury Tomorrow’s status as a “great” metalcore band due to their sometimes less than serious tone.

Before the interview came to a close we moved onto the subject of food which always seems to be a popular topic amongst bands. It was interesting to hear praises sung for vegan food once again with a number of great new restaurants opening up across Manchester. Dayvd was particularly impressed with the vegan diner V-revolution commenting that “it was nice to eat [vegan] food that tastes like food and not rubber.” Which had clearly been an issue over their tight schedule and undoubtedly limited time as they travelled from city to city.

The show later that night proved that the band were in high spirits from the great energy they expelled across the venue. Lead singer, Dani put on a lively show encouraging the raucous energy to rise and flow through the building. It was also really impressive to hear the band constructively praise the work of their supports that had provided equally powerful performances too. This kind of support is needed in a community of artist and performers and it’s great to see this behaviour really being put into to practice.

A stunning display of raucous energy and a band that deserves its place as a quality metal core band.