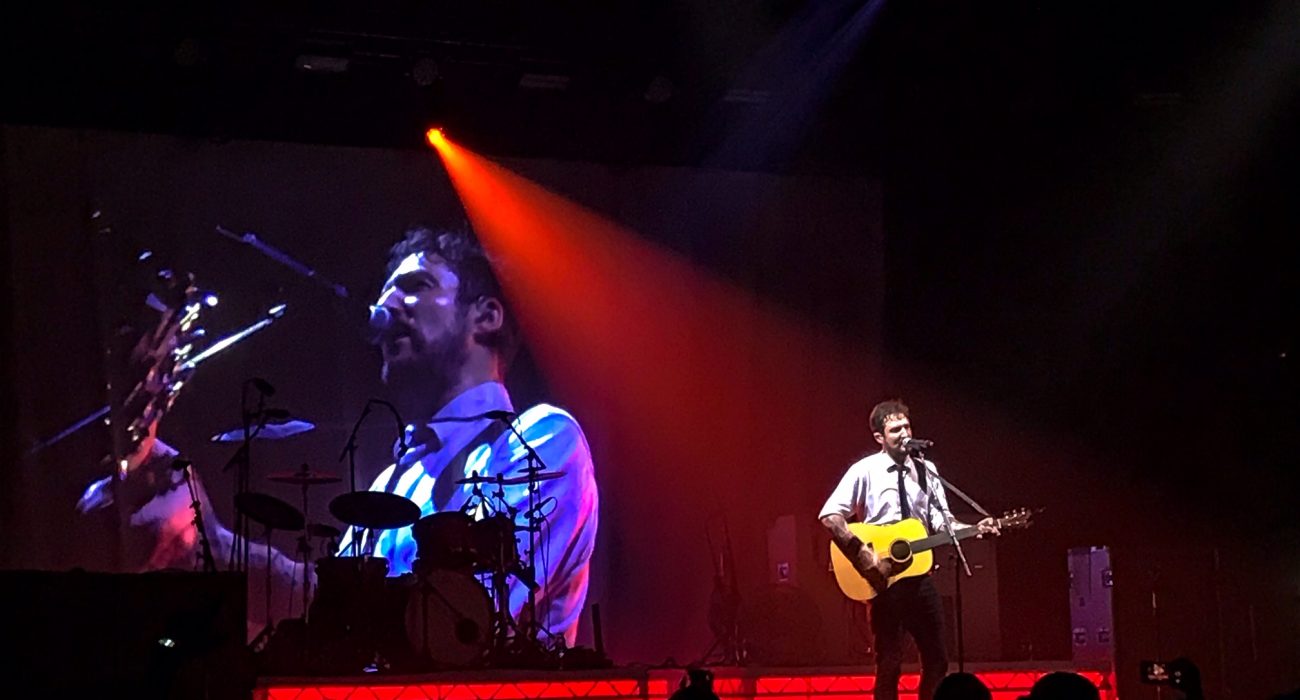 It is undeniable that a highly significant aspect of Frank Turner and his oeuvre is history. Many of his songs discuss past demons and loves (or combinations of the two), how he was and still is dealing with them, presenting a nostalgia for the past combined with anxieties about the present and a determined optimism for the future.

One might wonder, then, where Turner’s place is in 2019. Yes, the world overall is as fractious as ever, but for the thirty-seven-year-old things are…basically good. He is recently engaged, his latest album Be More Kind came out last year to universal acclaim, and with this gig at Victoria Warehouse he has reached – he proudly announces to the audience – his 2303rd show since 2004, without showing any sign of slowing down. U2, for context, have played 1968 concerts since 1976.

It is no surprise to the expectant crowd, then, when he sprints onto stage and vigorously gesticulates to all corners of the sold-out Victoria Warehouse, repeatedly lapping the stage in the process, to furiously paced and aptly named opener ‘Out Of Breath’. “When you meet death be out of breath” goes the refrain, with Turner looking a long way from exhaustion. If you’re looking for an energetic show, go to a Frank Turner gig.

Indeed, renditions early on of Turner staples ‘Recovery’, ‘Photosynthesis’, and ‘Plain Sailing Weather’ are deafeningly chanted back at him: whilst it would be remiss to suggest the crowd needed no warming up – after all, he is supported, somewhat startlingly, by the close to tricenarian rock veterans Jimmy Eat World – the crowd’s enthusiasm is an endearing reflection of Turner’s own vigour. Being an audience member here feels less like being an observer – though the pyrotechnics and impressive lighting mean this alone would not be a disappointment – but more an active participant, as much there for him as he is for those who have paid to marvel at his spectacle.

The answer regarding Turner’s place in 2019 is one of an interesting equilibrium between inward happiness and outward trepidation. Older songs like ‘I Still Believe’ and ‘Four Simple Words’ — performed blisteringly as the main set and encore closers — are anthems eulogising the wonders of homemade music untainted by a desire for fame. The release of Be More Kind, however, allows for songs like ‘There She Is’, a sweetly fragile piece dedicated to his fiancée. Turner is a highly evocative songwriter, but here the chorus, with simply the repetition of the words “there she is, isn’t she everything” feels enough.

Perhaps more surprising are new songs like ‘Blackout’ and ‘Little Changes’. These are so upbeat, so devoid of any anger that they are almost jarring. Almost. But Turner’s happiness and inclusiveness, blatant in this live performance, are infectious. The music video for ‘Little Changes’ (screened during the performance) features some delightful dad-dancing. The song at first seems innocent, yet the lines “so far from okay, tongue-tied and afraid” betray an extant vulnerability. Seven studio albums in his situation has changed dramatically, but Turner is still finding his feet in an ever-changing world.

His message to the people of Manchester? The titular track of his new album and first encore track summarise it: be more kind. Or, as Turner puts it to the crowd whilst naming two audience rules for this live show (he notes, incidentally, the hypocrisy of giving regulations at a punk-rock show), “don’t be an arsehole”. The second rule is that singing along (the caveat “if you know the words” is superfluous with this Manchester crowd) is compulsory.

Frank Turner is at a stage in his career where he would be forgiven for taking it easy, yet if this show is anything to go by, he has a hell of a lot more to give. In ‘The Road’, written ten years ago, he sings “a thousand nights I’ve played, a thousand more to go.” Were one to look at statistics only, the numbers he could hit ten years from now would beggar belief. Having experienced the vivacity and sheer liveliness with which he plays tonight, it becomes apparent that performing in front of a crowd is Turner’s default position. Why ever would he slow down now?