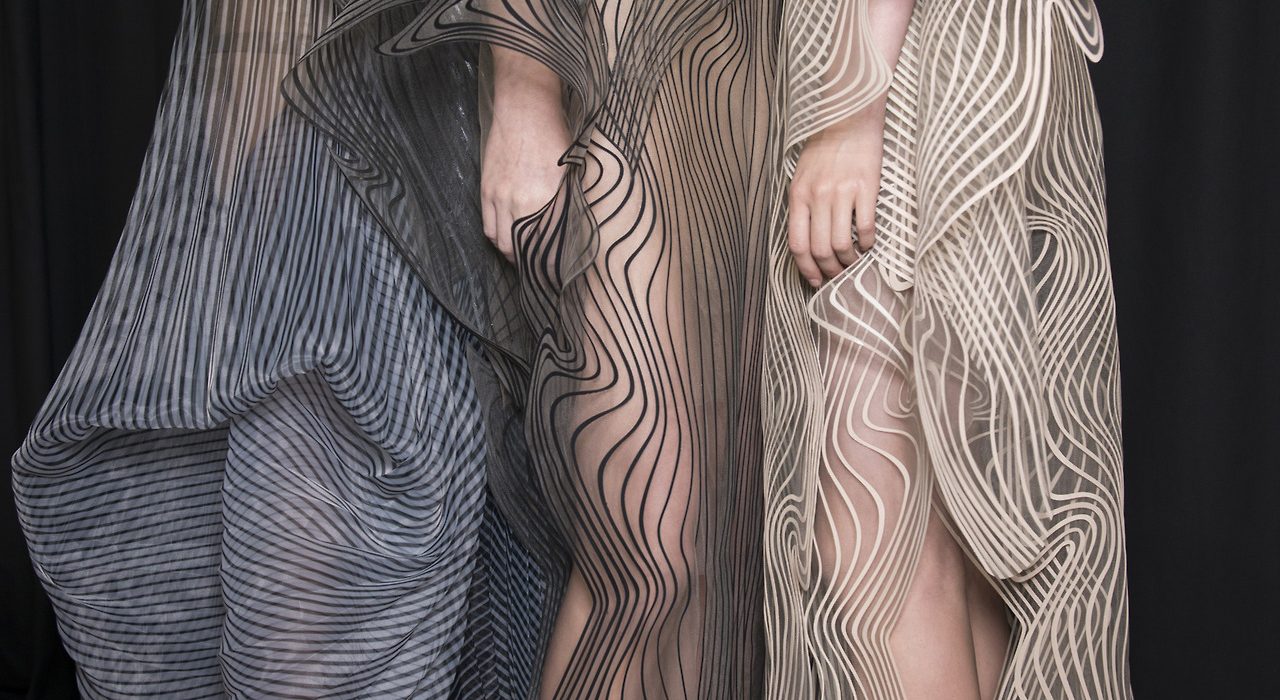 Iris Van Herpen is, without a doubt, one of the most important fashion designers of our time. Her work is often described as ‘fantasy couture’ – a rather interesting subcategory to suggest for a medium like haute couture, which seeks to exclusively create custom-fitted clothing at the very highest level of tailoring. Nevertheless, it does quite aptly capture Van Herpen’s otherwise indefinable eccentricity: a unique ability to realise improbable, futuristic feats when designing clothes which (by their very nature, as haute couture) demand a traditional sense of craftsmanship, quality, and technique.

Van Herpen is most widely recognised as the first designer to use 3-D printing as part of her method of creating clothing, sending her first printed pieces down the runway in 2009. Yet this is just one example of the designer’s interdisciplinary approach: she experimented with algorithmic sculpture for her Fall-2011 couture skeleton dress, inspired by the work of architect Michael Hansmeyer. Her Fall-2013 couture show ‘Embossed Sounds’ was a foray into sound engineering, as she imprinted fabrics with sound waves that were activated by touch and movement. Such unconventional manufacturing techniques, coupled with her frequent interdisciplinary collaborations, allow Van Herpen’s work to resist the comfortable categorisations of art, sculpture or indeed even fashion. Transcendence may be at the core of haute couture’s ideals of pricelessness and timelessness, yet Van Herpen’s work with technology has really pushed the boundaries of what the medium can be. The designer’s paradoxical desire for ‘ultimate control and more freedom’ can be seen to translate into her forward-thinking sartorial vision, and actually reflects much wider realities of living in a technological age.

Her most recent Spring-2019 couture show was Van Herpen at her most inventive, as she sent out a string of captivating dresses inspired by the concept of animal-human hybrids. Specifically, Van Herpen focused on images of female-animal hybrids from ancient mythology and culture. In the very first look we were delivered an imagining of the Ancient Egyptian Goddess Isis, with Issa Lish wearing a breath-taking navy dress made out of a lightweight sheeny material, the pleats of which simultaneously complemented the curves of the female body, whilst creating a romantic effect of cascading wings. A 3-D printed birdcage dress incorporated Van Herpen’s previous sculptural programming abilities whilst imbuing an aspect of metamorphosis, with magnificent shifts of the dress between sheer material and opaque electric red according to the movements of the body and perspective of the viewer. We were left searching for faces of the Korean Inmyeonjo in a variety of layered linework, as the collection can be seen to draw inspiration from cubist ideas of perspective, all while questioning the trajectory of the human form through mythical pasts into uncertain environmental futures. It is Van Herpen’s unique and fearless confrontation of such prospects (traversing past, future, form and technology) that places her designs at the very height of haute couture.