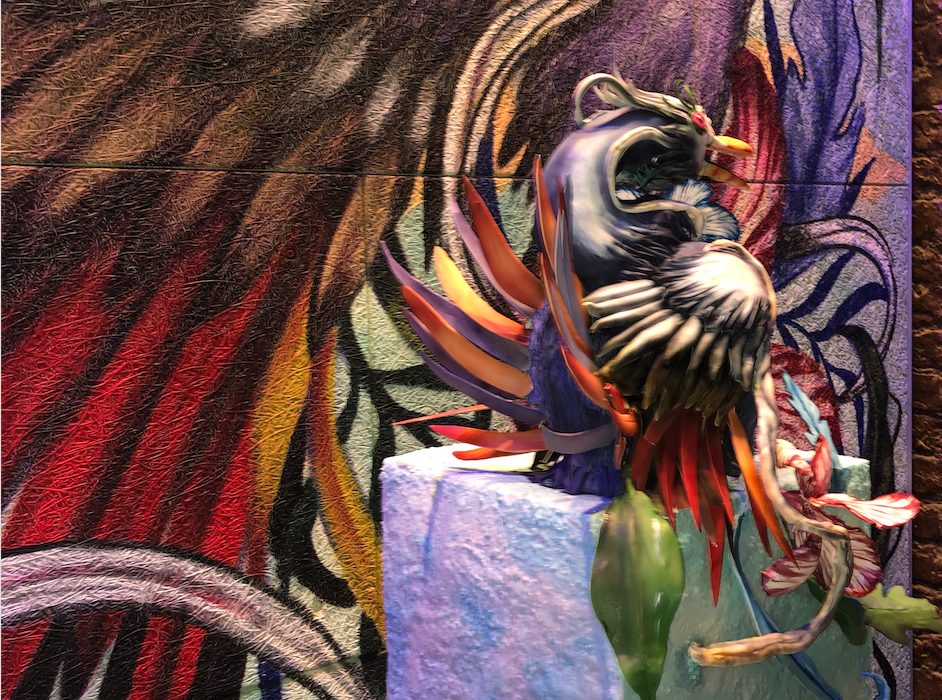 The Yard: The New Creative Hotspot in Manchester

The owners, Jo and Mark Hamburger wish to “transform the reputation of the area by bringing artistic talent in from all over Manchester.” The venue is immediately recognisable even from the outside. The red brick is adorned with an enticing mural of a phoenix whose bright and promising colours served as a reflection of the vibrant evening still to come.

The doors open with an exciting blend of conversation and loud music. The first things I notice are the giant works of art suspended on the walls. Designed by both Jo Hamburger herself and Manchester-based fashion student Morgan Allen, the intention was to “use this space to exhibit and showcase some of the city’s outstanding talent.”

Waiters dotted around the venue provide a remarkably eclectic array of bites, ranging from fresh sushi to falafel made right in front of you. But my eyes remain drawn to the phoenix motif running throughout the space, mirroring the atmosphere of its environment: a revamped Victorian school, transformed into a scene full of life and imagination.

Following a speech from the enthusiastic individuals behind the making of The Yard, the room absorbed their contagious humour. It was evident that the entire concept of the project was eagerly embraced by the crowd. Mark invited those from all over Manchester to hire the available spaces and keep an eye out on what events to attend in the future.

The audience was composed of people of all ages and occupations, creating a welcoming environment for both students and aspiring creatives. A community was formed at that moment; the sense of belonging, despite individual differences, was palpable.

The real climax of the evening was the entrance of the cake. Major media groups BBC and Channel 4 were there to capture the breath-taking work of art. Seizing the attention of each person it passed, it displayed an impressive motif that was now familiar to the guests: the Phoenix. Front row, I had the privilege of observing every detail on the oeuvre: a satisfying way to tie the event together.

After an appearance by Kevin Keegan, live music accompanied the remainder of the night and eventually saw the guests drift off home. The Yard’s opening night finishes, promising a vibrant future of events.

You can find out more about events and hire at https://theyardmcr.com.