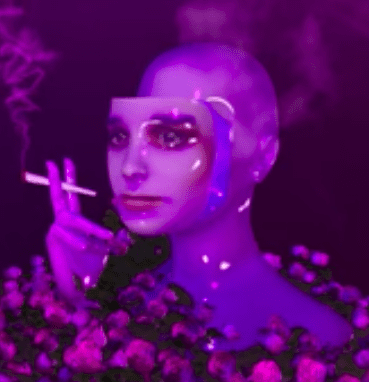 Terror Jr have always projected themselves to the world as somewhat of an enigma. Emerging seemingly out of nowhere in early 2016, the group was instantly shrouded in mystery, with many believing that none other than Kylie Jenner was the lead vocalist after their debut single ‘3 Strikes’ was used in her lip gloss commercial. Since this almost mythical inception, Terror Jr steadily released the Bop City trilogy – three EPs that expertly explored the realm of alternative pop through twisted synths and wonderfully dark production. After a brief absence, and a shift in the lineup, Terror Jr are back – now as a duo rather than a trio – with their debut full length LP Unfortunately, Terror Jr.

Throughout the album, Terror Jr manage to masquerade vulnerabilities and raw emotions behind a glittering veil of synth-pop and infectiously catchy melodies. It’s a thematic talent that has been delivered consistently across all of their releases from ‘Sugar’ (Bop City) to ‘Useless’ (Bop City 3: The Girl Who Cried Purple) but here on Unfortunately, Terror Jr, this sentiment is amplified tenfold.

The record delivers an introspective take on the anti-pop genre combined with some reflective commentary on the current state of affairs – not just in America, but globally. Single ‘A-OK (Everything’s Perfect)’ tackles the issue of superficiality in society – “Everything’s A-OK, if you don’t look too hard” – and builds to an emotive climax, emphasised greatly by singer Lisa Vitale’s vocals brimmed with a raw desperation that descend in to a flurry of hi-hats and deep bass. On tracks like ‘Heaven Wasn’t Made For Me’ and ‘Maker’, Vitale challenges the righteousness of religion and the corrupt nature of those who earn immortality through empty gestures. ‘Pretty’ handles the pressures women face from society to maintain, or obtain, unrealistic standards of beauty, layered nicely above a trap-like beat.

Despite the gloomy outlook on modern life and the bouts of existentialism, Terror Jr also provide listeners with some trademark attitude and confidence boosts. The surprisingly poppy and energetic ‘Have You’ flip-flops between those all too common moments of negative thinking in the verses and more defiant, self-affirming notions within the chorus. ‘Favourite Bitch’ furthers the concept of acceptance, finding positivity and comfort in embracing yourself and your own capabilities. Sometimes the gravity of the lyrics is lost behind the superb soundscapes and atmospherics, but these juxtapositions make the LP eerily intoxicating to experience.

Whilst the production is consistently elegant and enrapturing, with a healthy mixture of instruments, it has the tendency to become a little repetitive, especially on a 15-track album. There are some ‘saving grace’ moments, namely in songs like ‘Yamaguchi’ and ‘Maker’ with Vitale injecting some vocal quirks inline delivery, or elsewhere on ‘hungoverheadcrack’ wherein the instrumentals are a little more diverse and experimental.

Ultimately, Unfortunately, Terror Jr feels like a distinct project, a separate entity to the Bop City trilogy that manages to retain the idiosyncratic brilliance of Terror Jr’s musical style but still finds ways to add depth and progression. There’s a healthy balance between astute political and social discourse and straight up pop anthems that make the record an interesting listen, worthy of repeated play throughs.  Somewhat of a hidden musical gem, Terror Jr have delivered a commendable debut, and if you’re looking for something a little off-beat to listen to that still has topical weight to it, then this is the band for you.