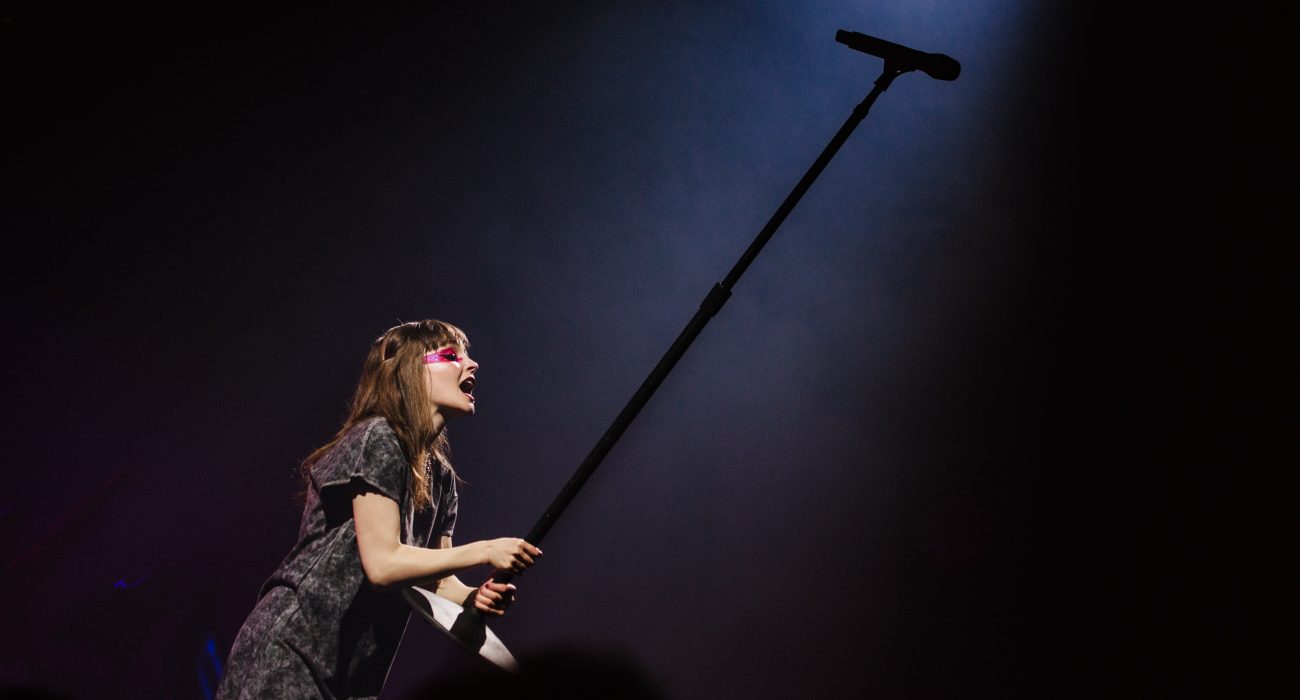 With a driving beat and burst of energy, CHVRCHES opened the show with ‘Get Out’ from their third, and most recent, studio album Love is Dead. The synth-pop trio born out of Glasgow performed two nights at Manchester’s Victoria Warehouse. Let’s Eat Grandma, a pop duo, are currently on tour with CHVRCHES as their supporting act.

CHVRCHES released their most recent album, Love Is Dead, in May of last year. The irony of performing this album on Valentine’s Day was not lost on the band, who joked about it between songs throughout the night. The well-natured group did not make the audience feel like they were laughing at them; rather, the audience was in on the joke.

Upon walking into the venue, signs informed attendees that strobes would be used in the show — and they certainly were. A signature facet of CHVRCHES shows are the impressive lighting visuals matching their high-energy songs. The lighting itself was a work of art, complementing the music and consistently creating a lively atmosphere.

Lead singer Lauren Mayberry is undeniably the star of the show — a title she would likely deny out of humility. Her stage presence was captivating. Iain Cook and Martin Doherty played off-centre on either side of the stage, with synthesizer setups and an array of instruments, each behind a large, lit-up ‘X’. This setup left Mayberry with a large stage to herself, which she had no trouble filling. Mayberry sported platform heels and pink makeup reaching her temples — a head to toe representation of her unique and spirited personality.

CHVRCHES songs are often characterized by hooks that leave the listener humming them long after they’re over. During their show, these hooks provided Mayberry with a point of connection with the audience. While singing the first part of the chorus from ‘Miracles’ — “But if love is enough, could you let it show?” — the crowd finished the line, “If you feel it could you let me know?” These catchy lines make the show more accessible to those who are unfamiliar with the CHVRCHES catalogue.

Between the intricate light display and quick-paced tunes, the gig was not just a musical act but a full-out performance. With a consistently bumping bass felt throughout the room, the audience couldn’t help but dance along. Even while blasting out melodies with her powerhouse vocals, Mayberry danced around the stage. Her aerobic-style moves are reminiscent of Robyn’s iconic routine in her video for ‘Call Your Girlfriend’.

The tone changed dramatically when Mayberry, standing alone on stage with minimal lighting, sang out their slow ballad, ‘Really Gone’. Mayberry’s voice held the audience captive — even without a drop, without a crazy light show. Once the song ended, CHVRCHES quickly brought the tone back up and engaged the crowd with some of their older songs, a chorus of voices singing along.

When the band returned for an encore, Mayberry slowly sang out the opening lines of ‘The Mother We Share’ before bringing it up to full speed, to the delight of the crowd — the song won for Best British Pop Single in 2013 and is arguably still one of their most beloved. CHVRCHES closed out with ‘Never Say Die’  — leaving the audience with the same level of energy and enthusiasm with which they began.