Metro Exodus takes place following the events of Metro 2033 and Metro Last Light and ditches the titular Moscow metro for several large open world areas across the post-apocalypse Soviet Union. I was worried this change would spoil the terror-inducing dark, claustrophobic vibe of the previous games which distinguished them from other shooters. Fortunately, my worries were unfounded.

Even in the open Russian countryside, Metro Exodus is still creepy, and the adrenaline rush of encountering a pack of mutants is exhilarating. The distant howls of irradiated monsters roaming the landscape gave me chills every time and were still frightening even at daytime, and suddenly seeing the silhouette of a flying ‘demon’ mutant on the ground below me was a particularly memorable and terrifying moment. A full day/night cycle and dynamic weather system add a new level to the experience that was less apparent in previous games. The sudden appearance of an irradiated snowstorm or a blinding sandstorm dramatically changes gameplay, reducing visibility to almost nothing, making it easy to stumble into bandits or mutants. 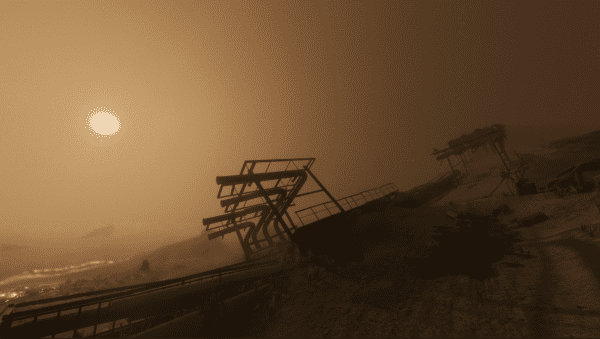 The outdoor environment of Metro Exodus therefore does not disappoint, however where the game truly shines is in the dark, dingy ruins, bunkers and tunnels you find through exploration and the story. 4A Games are masters at level building and as with the previous games, the atmosphere they create in confined spaces is phenomenal. In these areas I immediately felt uncomfortable and scared, my torch and shotgun the only things between me and whatever lurks in the darkness. Whether mutated spiders or ‘humanimals’ (basically ghouls from Fallout), they hide in the darkness and attack in packs, making the claustrophobic setting even more panic-inducing.

The gameplay compliments the ambience and enhances the experience. If you fall in a swamp or get caught in a sandstorm, your guns become dirty, reducing your accuracy and rate of fire. Worse, they can jam in the middle of a fight. Having to manually eject a round from your AK-47 is pretty much the worst thing to happen when a swarm of mutants attack you, but it adds to the immersion. At times I deliberately let my gun get dirty for immersion, as having a pristine weapon in the post-apocalyptic circumstances isn’t likely, which added some grittiness to the gameplay. Combat is tense and unforgiving, with the enemies whether human or mutant being likely to rush you and get up close and personal. Gunplay is deliberately slightly sluggish to emulate handling a real weapon, but not so much that it’s unpleasant to play, adding further immersion. 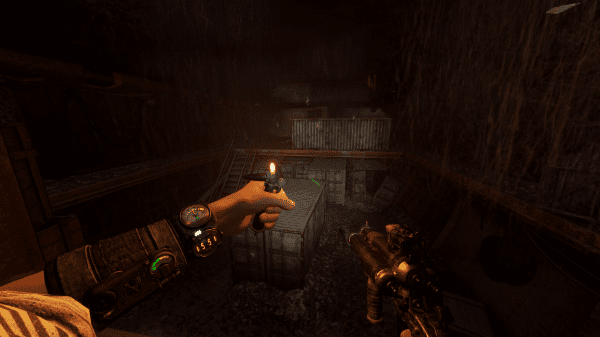 This leads on to the weapon customisation. All weapons can be substantially modified, turning revolvers into long-barrelled sniper rifles or a regular shotgun into a quad-barrelled monster. This is done using workbenches placed sparing throughout each of the zones, which is also where you can clean your weapons, or on the fly using your backpack. I loved being able to quickly put a silencer on my guns before silently disposing of a bandit camp. In addition, you can customise and mod your armour. Want your gas mask to keep out toxic fumes for longer? Build a better filter. Want to be able to survive a headshot? Build a stronger helmet but sacrifice your filter’s lifespan. In the photo above you can see the dial above the watch, which acts as a metal detector. I could replace that with a motion scanner or a compass. The list goes on, adding deeper gameplay; a noticeable improvement over the older games.

It’s worth mentioning that Metro Exodus is gorgeous. It’s amongst the best looking games I’ve ever played and is without a doubt the best looking first-person shooter around at the moment. The textures are crisp and detailed, the animations are convincingly natural and perhaps most importantly in a game like this, the lighting is incredible. The way shadows form realistically adds to the creepy nature of the game, while the sun’s reflection on water surfaces looks genuine. Even the skybox looks real, with 3D volumetric clouds that move across the sky. The level of detail on the weapons is also brilliant, with the paintwork becoming scratched with wear and tear and rust accumulating over time. After shooting an automatic weapon, your suppressor may glow red with heat while smoke pours out the barrel, or you may see the recoil spring jerk with each shot fired. The attention to detail is simply outstanding. 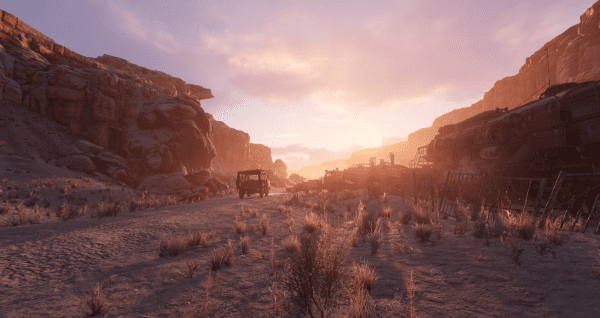 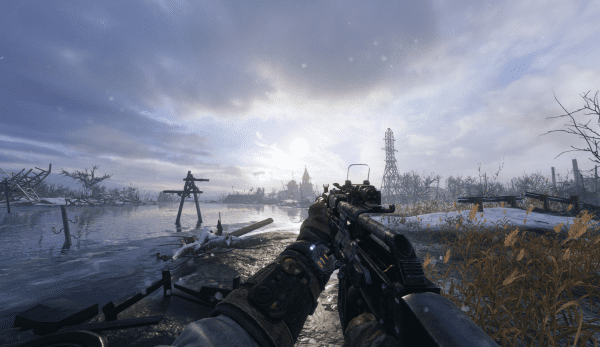 The story of the game is perhaps predictable at times but is otherwise an enjoyable romp across Russia and it’s interesting seeing Artyom’s (the player character) and his companions’ reactions to witnessing the world beyond the tunnels of the Metro for the first time in over twenty years. There are some interesting twists as well, with one that especially took me by surprise.

Unfortunately, the story is let down by two factors. The voice acting is, to put it bluntly, annoying. The overdramatic, exaggerated Russian accent put on by several of the main voice actors became grating after a while. Some players have even resorted to playing the game with Russian dialogue but English subtitles to subvert this issue and add some authenticity. Additionally, the dialogue itself is sometimes weak. Since Artyom is mute during gameplay (but is voiced during loading screens, bizarrely), everyone just talks at you. There are times when someone asks you an important question, but ultimately just answers it for themselves since Artyom does not speak, so much of the dialogue directed at the player just feels weird. Furthermore, the script includes some fairly obvious English/American colloquialisms that sound very odd coming from the over-the-top Russian accents.

My biggest complaint with Metro Exodus is not with the game itself, but with Epic Games. Last weekend, when I was hoping to play this game a tonne, my internet went down for about 36 hours, and because of always-online restrictions put in place by Epic, I could not access my save game. Why Epic made this choice I don’t know but it’s a further complication to the decision by 4A to put this game exclusively on the Epic Games store and not Steam. Thankfully, this problem probably does not exist on console.

Despite leaving the confines of the Moscow underground, Metro Exodus retains the claustrophobic, atmosphere-rich and unforgiving characteristics that made its predecessors exemplary. The open world zones are interesting, creepy and exhilarating to explore to scavenge for weapons and crafting parts to enhance your gear, meanwhile the often-underground dark and confined areas provided some of the tensest gameplay I’ve had in a while. Gameplay is surprisingly deep for a first-person shooter, bringing realism and immersion. Voice acting and dialogue detract from an otherwise intriguing story but are not game-breaking. If you enjoyed the previous Metro titles or other survival horror games, you’ll love Metro Exodus.