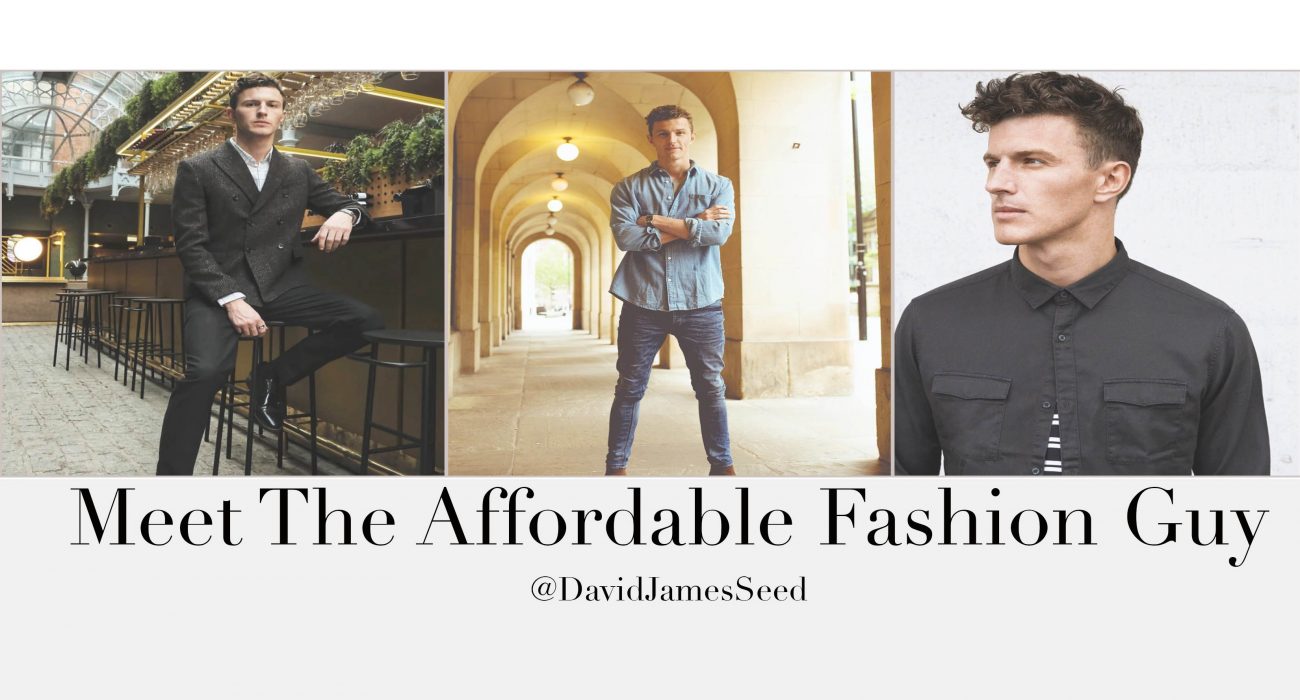 Manchester has recently been referred to as the powerhouse for some of the leading fast fashion digital brands in the UK, including Missguided, Boohoo, PrettyLittleThing, and I Saw It First. Over the past year, the British Fashion Industry has contributed over £32.3 billion to UK GDP, which is around a 5.4% increase from 2016. This significant growth is higher than that of the UK economy as a whole. The British Fashion Council said “the increase came from online retail and some growth in manufacturing, while UK designers were going from strength to strength globally”.

The Mancunion recently had the chance to sit down with the man dominating the affordable fashion trend right here in Manchester. David Seed is a 25-year-old male model and blogger, famed for his intricate way of putting together stylish outfits for under £61.

Fashion bloggers and influencers have been dominating the fashion industry for some time now, with their influence sometimes surpassing those known as your typical “celebrities”. There can be many reasons as to why someone would start a fashion blog, ranging from the love of intricately putting together ensembles which showcase their creative side, to those who can easily afford the newest trend once it rolls on in. Whatever your reason is for trying to enter this industry, one thing they all have to have in common is a love and understanding of fashion. David who is known for his affordable fashion touched on what first inspired him to start showcasing his looks.

“I model full-time and often wear quite expensive clothes. I could never get my head around why some items I was modelling were so expensive. I obviously understood that branding is a huge draw for some… but I’ve never been a ‘brand guy’.

“From a young age, I’ve always got a kick out of going into supermarkets and putting together outfits from items that would be classed as ‘Dad’s clothes’ and styling them to an outfit that would be current. I started posting my outfits and people seemed to really enjoy them. Since then [a year and a half ago] it’s snowballed, and I just love showing people how they can dress well for less.”

Over the past year, influencers have been taking a stand and opening up about their mental health and insecurities. Some cynically believe this is just a tactic to increase their followers’ brand-loyalty. Others believe influencers are doing this to raise awareness around the stigma that surrounds the industry, increasing trust within their following.

When asked how he stayed motivated in such a rapidly-changing, competitive industry, David came back with “I enjoy it. It’s that simple. I’m not competing against anyone but myself, I’m a positive guy so I just keep positive and try to provide something of value to others.

“I think it’s really easy to join the ‘Instagram culture’ life we live, where so much content we consume from bloggers/influencers’ – I hate that word – is actually not realistic, like someone showing off their Gucci bags. I’ve never seen myself as someone who follows the crowd. What I really enjoy about what I do, is (hopefully) bringing value to my following by creating content that is actually accessible to them, like a great outfit only for £61.”

It’s safe to say we all imagine that an influencers life is made up of taking wanderlust-worthy pictures on a white sandy beach with their mojitos and smoothie bowls, I mean that is what their life consists of right? To get some actual insight we asked David what a typical day in the life of a fashion blogger and model would look like. “I’ll get up and enjoy a strong black coffee and some eggs on toast. Check my Instagram and reply to DM’s and comments and scroll through those I follow and engage with them also.

“I’ll hit the gym at some point. Fitness is part of my lifestyle, just like brushing my teeth. Aside from those two things… every day is different! I could be casting for modelling jobs, I could be modelling for clients, I could be sat replying to emails or editing photos/videos. It really ranges. But I never sit and do nothing. I think the perception is you just take a few photos and upload them. But a lot of work goes in behind the scenes, be it meetings or prep etc. I think I would go crazy if I didn’t actively find something to do!”

To end our sit-down with David, we asked him what his number one tip for anyone wanting to enter the fashion blogging industry affordable fashion or not, David tells us to “not do it for money. If you do, it will be so transparent that your content is coming from a selfish place to gain, rather than to give. Do it because you ENJOY it. Provide some form of value. Make that your focus and it may one day come back around.”

With an industry filled with Louis Vuitton and Gucci’s, it’s always refreshing when you find a fashion blogger, who’s style you can not only relate to but that won’t require you taking out a second mortgage to afford. With a steady following of 26k on Instagram and a growing Youtube channel, the possibilities are endless for this affordable fashion blogger.