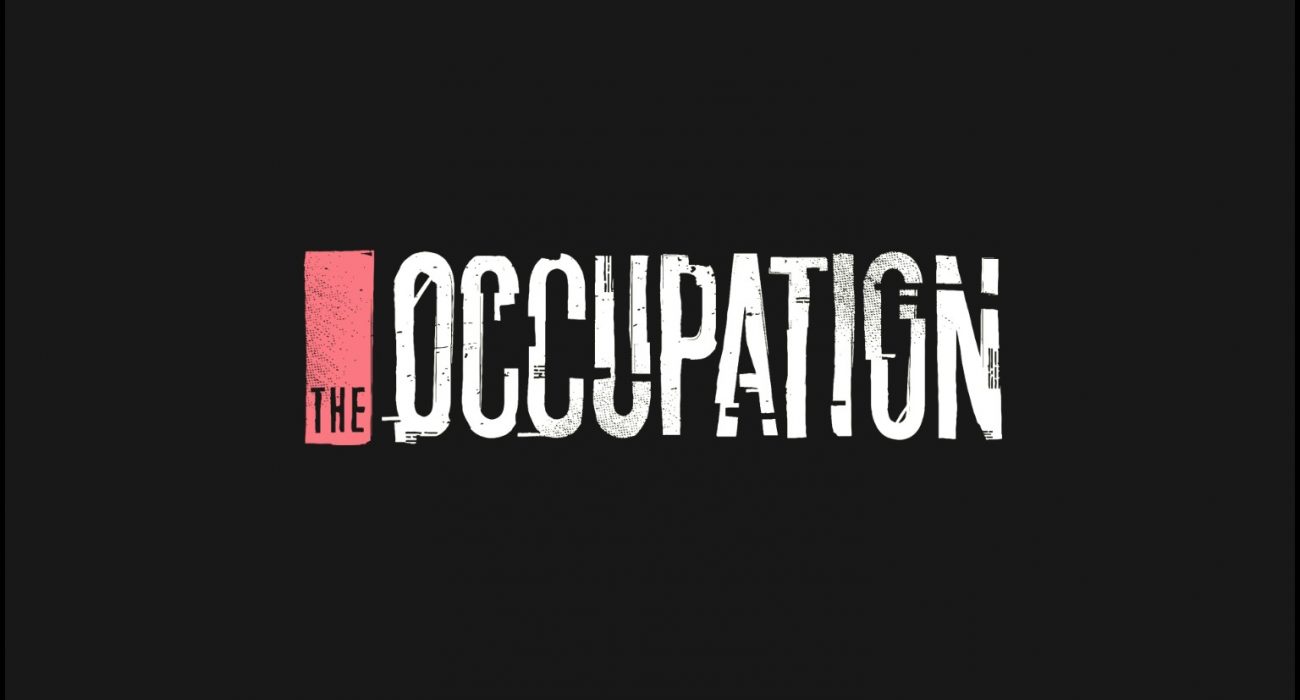 The Occupation is a real-time political thriller with inequality at its heart. And by inequality, I don’t mean the political concept (although that certainly is a theme), but how erratic it is in terms of its own achievements. In terms of narrative, gameplay, and atmosphere, White Paper Games have produced a stellar indie title – quite possibly one of the best I played in a long time – but it is so beleaguered by technical issues, bugs, and idiosyncrasies that unearthing its brilliant nucleus could be a difficult process for many players.

The game is fixed-length, taking place in a city called Turing over the course of four hours. In effect, however, it is four one-hour chunks interspersed by flashbacks and cut-scenes. At the end of each of these one-hour levels (for that’s what they effectively are), you will interview a prominent member of the Bowman-Carson Group, the clandestine organisation at the epicentre of a major terror incident. Arriving an hour early for each interview (with the last one being a bit shorter), you are free to sneak around the offices as much as you want to arm yourself with more information with which to grill your interviewees. 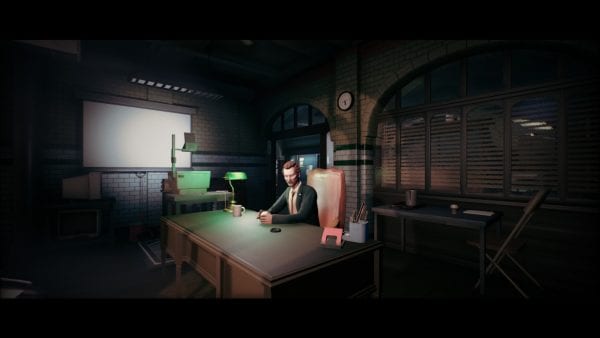 I should add that this sneaking about is not compulsory. Playing The Occupation, you can simply sit and wait for your meetings to commence, or else only prioritise low-risk, low-reward leads. You won’t be able to ask as many questions, but, as you might imagine, interviewees are far less prone towards hostility if you aren’t caught sneaking around their office before speaking with them.

Sneaking itself is probably the central mechanic of The Occupation, and is done extremely well. Although your character, Harvey Miller, will sometimes sway up or down unpredictability depending on your proximity to physical objects, I really liked how unforgiving the stealth was. I’ve played lots of games where you have to be seen for a sustained period of time, or at a close distance to be spotted, but in The Occupation, quite realistically, it only takes a glimpse in the peripheries of the security guards to arouse suspicion, while a proper sighting will get you in trouble instantly.

The time-sensitive nature of your assignment really ramps up the tension of this. One hour may sound like a reasonable time to snoop around offices, but when you’re trying to solve what is essentially a multi-sided, 4D puzzle, it really flies by. It can be nerve-wracking and, being honest, incredibly frustrating, but it really drove the occasionally laboured pacing forward and made this feel like a frenetic, if slightly clunky, stealth game rather than a straightforward walking sim.

This is well-balanced by only deploying one or two guards, who can be circumnavigated with relative ease. Nonetheless, I never found the game too easy, with Steve (the principle guard) often appearing unexpectedly to vanquish my quest for the truth.

Speaking of the quest for truth, this is where the crux of the game’s narrative lies. To this day and three playthroughs deep, I still don’t feel like I’ve got the full picture of what actually happened on the day of the incident, with the plot being communicated through a series of unreliable narrators, ambiguous flashbacks and conflicting pieces of evidence. Every truth you unearth in The Occupation feels somehow like one of many versions of parallel truths, and unraveling the many threads (and red herrings) in the narrative was a sheer delight.

This nuance really made the game worth playing over and over, so compelling was the mystery at its centre. I loved the maturity and discursiveness at the heart of this plot, and, for the most part, it traded political condescension for an atmosphere of uncertainty, moral ambiguity, and mixed agendas. This is a proper detective game that doesn’t hold your hand, making you work to get the most out of its surprising depth. 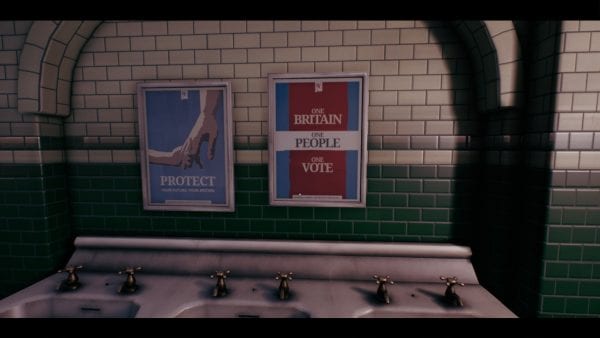 Unfortunately, I did feel The Occupation became a victim of its own integrity in this way. Whilst it has the ability to hook you, it can also feel so utterly obfuscated as to be off-putting. Certainly, my first playthrough felt overwhelmingly vague, a series of contextless dead-ends and disappointments. In all honesty, I may have been put off a rerun had I not been reviewing. There were a number of in-game tasks that I felt required one more step than was reasonable in the time that I had, and this meant every eureka moment was counteracted by one of utter bafflement. I do feel that, in this way, The Occupation could have facilitated something like a journalistic debrief before the investigation without breaking its steadfast commitment to immersion and realism, which would have cleared up some of the initial teething problems and anchored me in the game’s world.

That being said, the game’s world did do plenty of its own legwork. It may not have been the most spectacularly interesting to look at, with plenty of gloominess, rain, and repurposed bureaucratic governmental buildings, but its sombreness, along with its feeling of paranoia and political unrest, created a stellar atmosphere. That White Paper achieve this whilst populating the game very sparsely is a testament to the work of the design team, as well as the game’s voice actors. A sprinkling of unintrusive references to Ether One helped, too, in making this feel like a breathing universe, as does its resemblance to Manchester, the city on which Turing is based. 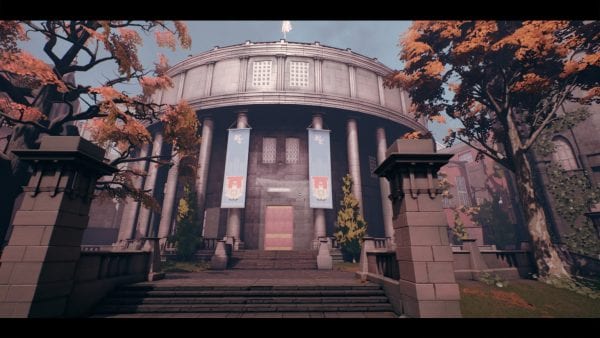 Unfortunately, the major drawback of The Occupation is how buggy it is. Upon starting the game, I encountered severe problems when trying to upscale the game to 4k, leading to a two-hour quest which resulted in me having to delete obscure local game files in order to be able to play the game. Elsewhere, I was occasionally caught ‘trespassing’ in public places, whilst one occasion saw Steve clip through a staircase and become stuck, nightmarishly, between the staircase and a floor. On two occasions I fell through the map, meaning I had to reboot. Fortunately, these occasions were in the short, linear flashback sections, because the much-maligned save system can cost you up to an hour of progress if you fall foul of its whimsies.

It is also prone to alarming frame-rate drops, with several cutscenes and mediating segments plagued by this issue. For a game built around immersion and realism, this can be incredibly jarring, and break the game’s otherwise seductive spell.

Usually, if I’m approaching the close of a review with a seven-ish out of ten in sight, I’ll use words like ‘solid’, ‘worthy’ or ‘valiant.’ The Occupation is none of these. It is both profoundly brilliant and profoundly flawed, exceptional in some areas, but exceptionally uneven in others. For those willing to put the work in, there’s a diamond here to be found. But it is a rough diamond indeed.