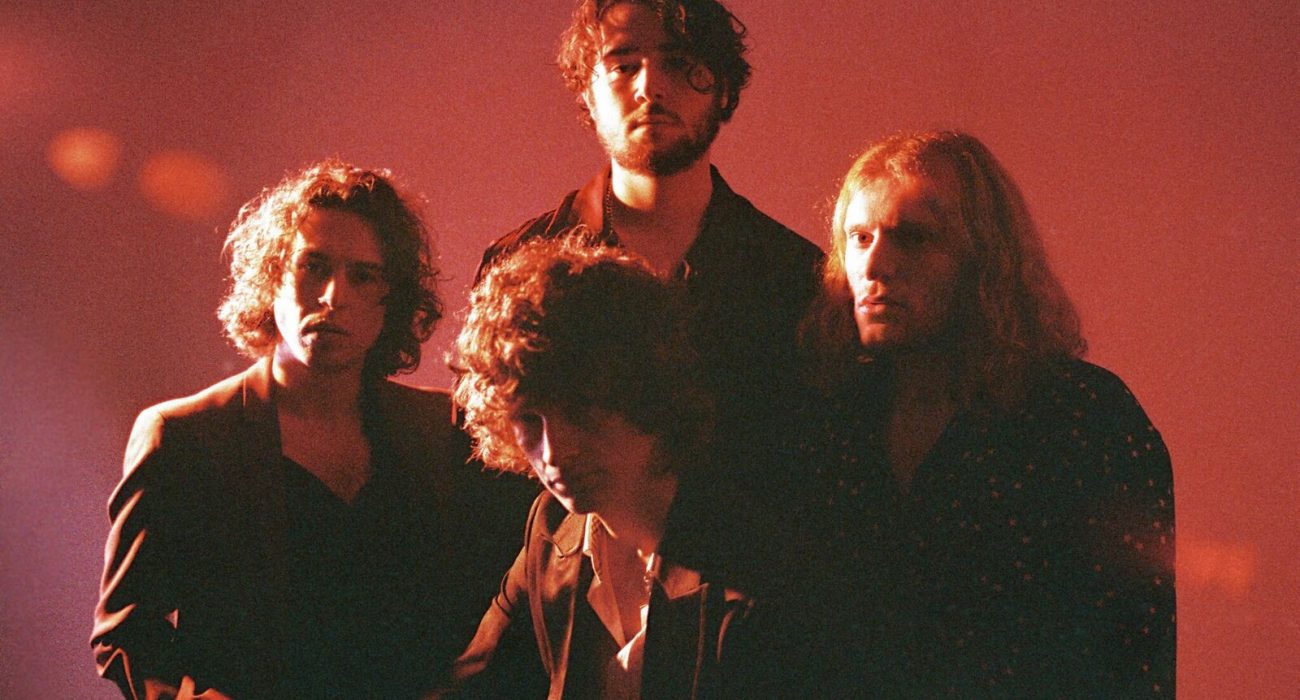 In Conversation with Kashmere

Across many of my experiences at gigs, I have really begun to note that there have been very distinctive shifts in the emergence of new indie rock. It appears that a taste for an alternative sound is emerging rapidly through the independent music scene, tracing its roots from beyond the classic idea of the ‘Manchester’ band and building with growing enthusiasm.

The dominant guitar heavy sounds that seemed to rule the airwaves throughout the 90s and 00s have begun to shift revealing a root growth from far before this time. This seemed to be a sentiment that was shared too by Kashmere frontman Joey Newey as we sat down for a chat about the latest from his four-piece, Manchester-born indie rock band.

He elaborated “I never really look directly to my favourite bands for inspiration…we tend to go quite a bit further back when we’re creating new material for singles and stuff” suggesting that there is a careful balance between Newey’s lyricism and exploration of archived chords. It’s interesting then that in the past singles such as ‘Codeine’ had almost been put aside due to their overall style. At the time of its release, the band had focused quite heavily on their indie inspired tracks such as ‘Hoxton’ so this perhaps made logistical sense at the time.

Fast forward to 2019 and currently their 2018 single is the top rated song for the band, having raked in a cool 200k listens on Spotify since its release. This song has often been a hot topic with other writers who have cited the unique, ethereal sounding synths at the beginning of the track as something rather special. It has readily been compared to the kind of sounds created during the high points of 80s synth pop but Newey is quick to point out that this is not the sound that they had originally intended.

Newey explained that the sound had been discovered through “experimentation with a 70s style in mind” for the synth within the track. This idea is continued into the music video which was shot amongst the bright lights of Manchester’s China Town, providing a bold “fever dream” setting for the track. However, despite the seemingly effortless edge that radiates from the video Newey recalls that filming had been a worthwhile challenge. He commented that “it was difficult at times to appear natural” within Manchester city’s centre driving around the same circuit for hours on busy Saturday evening (I could only imagine the chaos and abuse from revellers that they must have had to put up with!)

Continuing with this theme, we began to discuss the mammoth effort that had been put into filming the music video for their latest release ‘Gravity’, a ballad that centres on a metaphoric breakdown of a relationship. The video was shot in Anglesey across the planes of a quarry on a day that Newey described as “The windiest and wildest Mars scene you could imagine”. The silver space suits (a concoction of doctored fancy dress costumes) had apparently done little to prevent from the elements, as Newey candidly recalled that it was “throwing it down” and that the dye from their clothes had seeped through and clung to their costumes.

He added, “put it this way, if any of us had any ego prior to that shoot it was surely gone in that moment.” He assured that despite a moment or two, there was minimal “Primadonna” behaviour present on set. Newey also highlighted the incredible visual work of the music video’s director Shaolin Pete and the in house creative team at Scruff Of The Neck who he felt “really brought the concepts we had as a band to life.”

The journey to creating the track seems to really centre on an obsession that Newey has with sonic quality and flair. He explained that he has a rather expensive tendency of buying new instruments to create the latest tracks: “it’s weird I suppose the way I write but I wouldn’t have written ‘Gravity’ or ‘Codeine’ without that kind of investing in the track.” The band’s attention to detail with this soaring ballad is clear but I did note that side steps had been taken to create the track as it veers quite dramatically away from the previous discography that had begun to form.

In response to my comment, Newey explained the track was always intended to explore the band’s ability to reach beyond and into new and alternative sound within the indie music scene. He remarked, “we want to create the most unique sounds in Manchester right now, that’s exactly what we want to do.”

Kashmere are set to release another as yet untitled single in late spring with a release date for their upcoming album still to be confirmed.