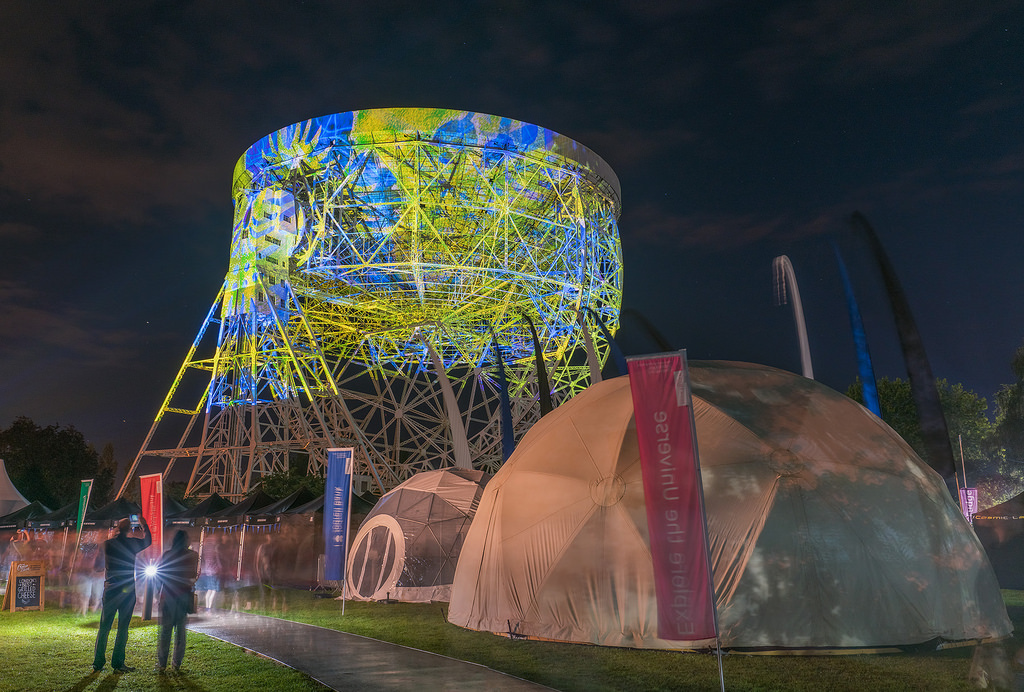 On 21st July 2019, it will be 50 years since the Apollo moon landings.  What better way to celebrate than to see New Order play in the shadow of the Lovell Telescope at Bluedot festival in Cheshire?  Other headliners include Hot Chip on Friday 19th July and Kraftwerk, the pioneers of electronic music, on Saturday 20th July.  Seeing such legendary bands in the proximity of the iconic British structure the Lovell Telescope really isn’t one to miss.  Get yourself to the Jodrell Bank Observatory (JBO) in Cheshire to immerse yourself in all that is great in the world of music and science.

Bluedot Festival takes place on 18th to 21st July 2019 at the JBO in Cheshire.  This festival is a bit different from most as it cleverly combines music and science for a unique festival experience.  Don’t worry if the mention of science is resurrecting unpleasant memories of GCSE science classes, Bluedot seamlessly unites music and science so that they complement each other.  Bluedot integrates the most relevant and forward thinking discoveries in science into a festival environment in the form of talks, demonstrations, immersive installations, and telescope projection pieces and more.  There really is something for everyone with plenty of activities aimed at children.

For example, why not catch Liz Bonnin talk about ‘The Problem with Plastics’ on the Saturday?  With global warming reaching scary heights it is imperative that such issues are discussed, and choosing to host a talk at a festival is opening the debate up to children, teenagers, and adults.  It’s great to see festivals such as Bluedot engage in such important topics.

However admittedly for most people, it is the music that lures them to Bluedot.  Officially held since 2016, Bluedot has seen acts such as New Order, Pixies, Alt-J, The Chemical Brothers, Gary Numan, Hot Chip, Orbital, Underworld, The Flaming Lips, and Jean-Michel Jarre take to its stages to name just a few. Watching one of your favourite artists to the backdrop of the looming Lovell Telescope really would be an unforgettable experience, concocting a futuristic atmosphere that no other festival could recreate.

Famous scientists at Bluedot include Richard Dawkins and the University of Manchester’s very own Brian Cox.  Although the focus this year may be on Neil Armstrong, the first man to have stepped foot on the moon, women in science will not be forgotten!  There will be a talk from Helen Sharman, Britain’s first astronaut, held on Friday.

Bluedot festival 2019 will see Kraftwerk, New Order, Hot Chip, and many more take to the stage in a friendly and respectful festival environment in the midst of scientific and artistic celebration.  Commemorate some of humanity’s greatest achievements in science by visiting Bluedot this year and see some amazing bands.