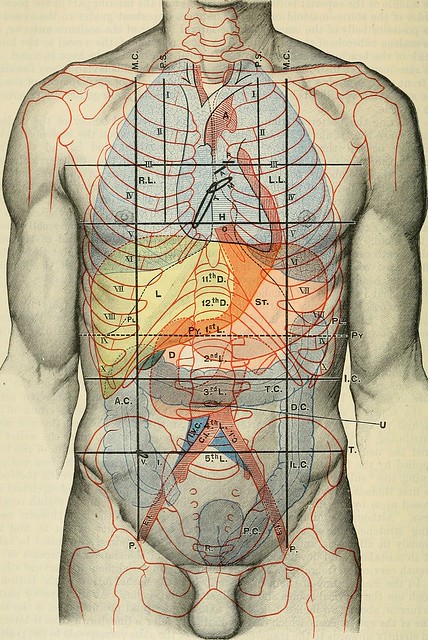 Organs on the wrong side of her body

When Rose Marie Bentley decided to donate her body to a nearby university for science, she did not suspect that she would become the focus of international interest. The 99-year-old woman was found to have internal organs on the wrong side of her body, yet she nor her family, or her family’s doctor knew.

The discovery was made when medical students at the Oregon Health and Science University were dissecting her cadaver and found abnormalities in the heart’s blood vessels.  Further investigation revealed that all of the organs in Mrs Bentley’s abdominal cavity were positioned on the wrong side of her body, except for her heart. This is known as ‘situs inversus with levocardia,’ a congenital condition where the abdominal organs are mirrored from their normal position, but the heart’s position remains unaffected.

It is usually accompanied by severe heart defects and a shortened life span, but these factors did not affect Mrs Bentley. She died of natural causes at the age of 99. Doctors suspect the vascular arrangements that perplexed medical students allowed Mrs Bentley’s heart to compensate for her anatomical abnormality. This might have been the reason why she was entirely asymptomatic throughout her life, even though the condition has always been thought to be highly debilitating.

Situs inversus with levocardia occurs in roughly one out of every 22,000 births with merely 5-13% of afflicted individuals surviving beyond five years. Fatalities are usually due to heart disease or other conditions associated with organ misalignment. Reduced splenic functioning, intestinal malrotation, and polysplenia (a disorder where multiple dwarf spleens form instead of one normal sized spleen) are three such conditions.

Little is understood about the cause of situs inversus with levocardia, but many suspect that answer lies in embryonic development. Asymmetric organs (like the heart) begin to gain left-right differentiation in the embryonic stage. The heart’s growth is controlled by a different signalling system than other internal organs. Usually, communication between the two systems ensures that correct orientation is achieved in all organs. However, if this communication is interrupted or damaged, then such coordination cannot occur. This could explain the abnormalities see in situs inversus with levocardia.

So how did no one know about Mrs Bentley? Well, there were some signs. When she was in her 50s doctors tried to remove her appendix but could not find it. Years later she underwent surgery to remove her gallbladder only to discover the organ on the other side of her body. Yet no alarm bells were ever raised. Surgeons simply shrugged their shoulders and stitched the incisions leaving Mrs Bentley and her family none the wiser. Louise Allee, Mrs Bentley’s daughter, told Oregon Health and Science University that her mother would have been very pleased to know that her body has enabled others to be “educated with something unusual.”

Perhaps this is not the only lesson to be learnt from Mrs Bentley. Multiple medical professionals observed her atypical, and potentially harmful, anatomy yet nothing was ever said to the patient. A simple x-ray would have provided clear evidence of situs inversus but professional curiosity fell short. The lack of post-procedure investigation, it could be argued, is an example of the medical profession being overstretched and underfunded to the detriment of patients. In the UK over 3,700 procedures were cancelled at, or shortly before, their scheduled time slot last March, leaving patients with discomfort and uncertainty.

Both Mrs Bentley and her husband decided to donate their bodies to science after being inspired by a Robert Test poem ‘To Remember Me,’ which ends with “let my body be taken from it to help others lead fuller lives.” Hopefully not only education will be gained from these bodies, but also an increased drive for healthcare reform.