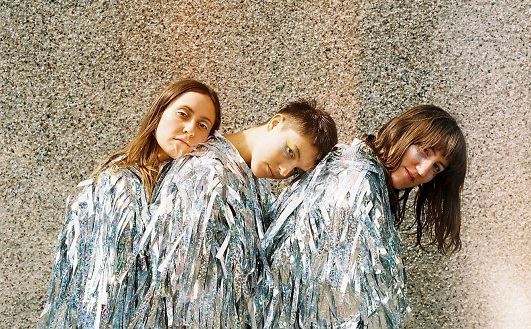 On Wednesday, 13 November, Manchester’s Everyman Cinema is joining forces with the biggest design festival in the North, Design Manchester, to host the Stealing Sheep “BIG WOWS” Video Series Premiere as part of the DM19 programme.

Everyman creates innovative bespoke experiences in each of its 30 independent cinemas, including its annual Everyman Music Film Festival every spring, album launches, performances, live broadcast arts events and parties, which, combined with its focus on creative design, make it the perfect spot to premiere Stealing Sheep’s “BIG WOWS” video series.

This video series premieres at Everyman Cinema Manchester with live “sing-along” karaoke hosted by Stealing Sheep, a Q&A with the band and director, plus an afterparty DJ set with Stealing Sheep.

Bex M and Luci say: “We’ve been virtual friends with Pastel (Emily!) for a while and we always love what she’s posting online…we loved listening to her music, watching her animations and seeing her game designs. She did a cute video for a Liverpool punk band called ‘Eye saw and the Jinx’ which had some funny satire stuff going on, it felt very on point and witty!”

“She has a positive, glistening energy that really stands out and she has pink hair and loves “Adventure Time” so we knew we were made for each other!!! We were really excited that she said ‘yes’, she’s brought so much to the album, it’s like having a new band member! She’s our hero!”

Pastel says: “All of the videos have been built digitally frame-by-frame at my home animation studio in Leeds. I tend to consume a lot of sugar and chocolate while working, especially on long 10-18 hour animation shifts. I also tend to rinse full cartoon series from start to finish during animation work (recently including Neo Yokio, Adventure Time, Bravest Warriors, My Little Pony, Rilakkuma and Kaoru, Attack on Titan, Tokyo Ghoul and Pokemon Indigo League).”

Want to score yourself a ticket? Check out the Everyman website.