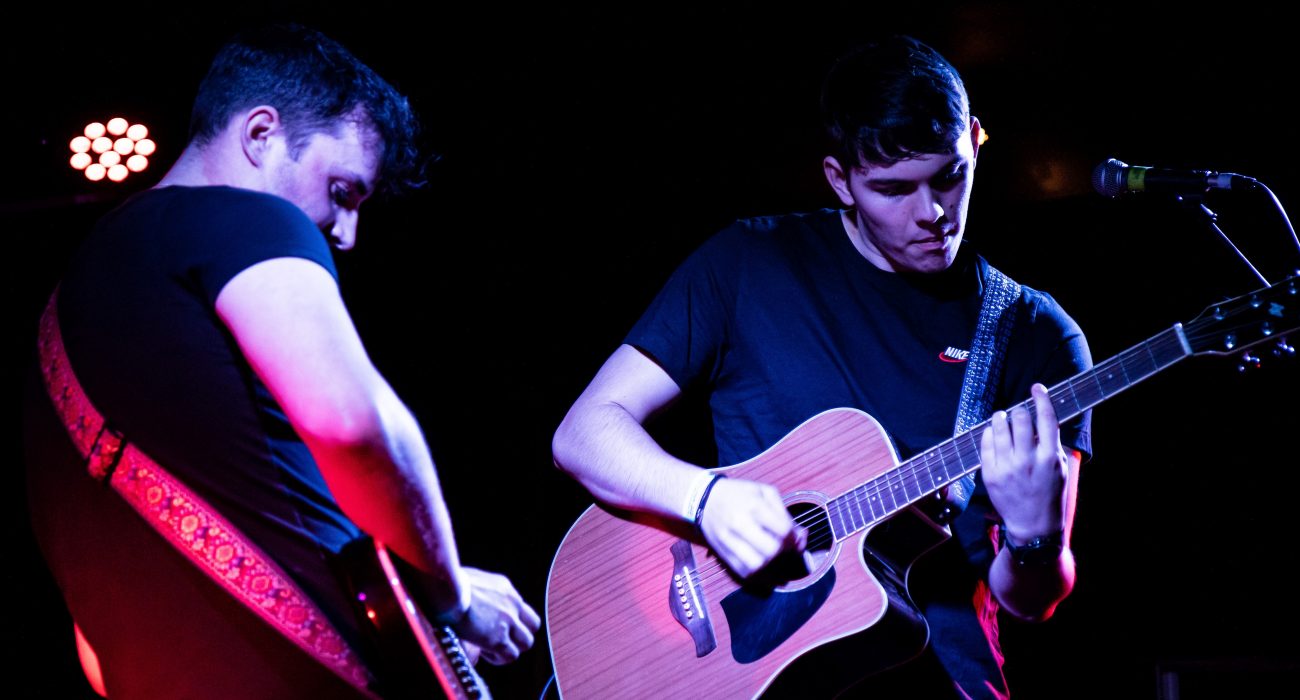 On a cold February Friday, situated a stone’s throw away from Leeds City Bus Station, the underground venue of The Wardrobe played home to Champagne on The Rocks, a Manchester-based acoustic, student duo.

Featured on the bill as the first support act for the band, Surefire Affair, the group maintained professionality whilst entertaining with their self-written indie rock compositions centred around themes of adolescence, heartbreak, and drunkenness — all of which struck relatability amongst a younger audience.

The duo, made up of school-mates Tom Wood and Robin Cooper, have only been gigging together since September. Nevertheless, the professionalism shown that night was equivalent to bands many years more experienced. Their opening number, ‘Drink to Remember’ immediately highlighted their unique style of songwriting. Both originally from Leeds, their vocal style clearly displayed their Northern roots. The song also proves their songwriting process is highly effective — Cooper mentioned to me that they tend to write both lyrics and music together rather than separately.

Cooper explained the musical influences that have guided the duo. He mentioned a blend of Ed Sheeran, KALEO, Arctic Monkeys, and country group, Florida Georgia Line. Despite these influences of country not shining through into their performances in a big way, the duo did make good use of funk guitar rhythms on top of their Arctic Monkeys’ vocal styles and Ed Sheeran-esque rapping.

Two of the songs which showed these two distinct influences were Hot July and Manhattan. The former showed Wood’s experiences of a summer romance falling apart. It was in this song that Wood’s vocal brilliance was most displayed — this demonstration of his timbre and vocal range was impressive. Manhattan, on the other hand, demonstrated the group’s collective talent with  classic rock ‘n’ roll platforming Cooper’s virtuosic guitar skills alongside Wood’s rapping talent. Rarely seen due to its complexity, Cooper played his guitar solos almost entirely on acoustic guitar. With this skill, Cooper is exploiting a key gap in the market proving his rightful place in the band alongside Wood’s vocal strength.

The boisterous and catchy song  ‘Burning Bridges’ finalised their repertoire; described by an audience member as “simply brilliant”, there is little to critique. The outro was extremely effective at showing the funk-influenced guitar rhythms, a point made better by Cooper switching from acoustic to electric guitars. Apparently, an upcoming acoustic EP featuring ‘Burning Bridges’ will be released later this semester — hopefully this will prove to be a big breakthrough for the band.

The duo delivered a fun and punchy performance. Nevertheless, they were slightly short of perfection. At times, Wood and Cooper appeared slightly nervous, preventing them from livening the youthful and fairly sparse crowd; however, I am sure this will be something that will be ironed out with more live performances. In addition, in spite of their acoustic style being highly effective, at times their songs were yearning for greater texture — use of a drum kit and a small backing of a bass guitar could lead to their songs to sound even richer than they do at present.

Overall, Champagne On The Rocks isn’t just another acoustic band. Their genre-fusing, catchy compositions are just a glimpse of the enormous talent these young musicians possess. Currently, the band is looking to do more support sets for bigger bands; given what they deserve, the near future may well see the duo attracting support groups of their own.