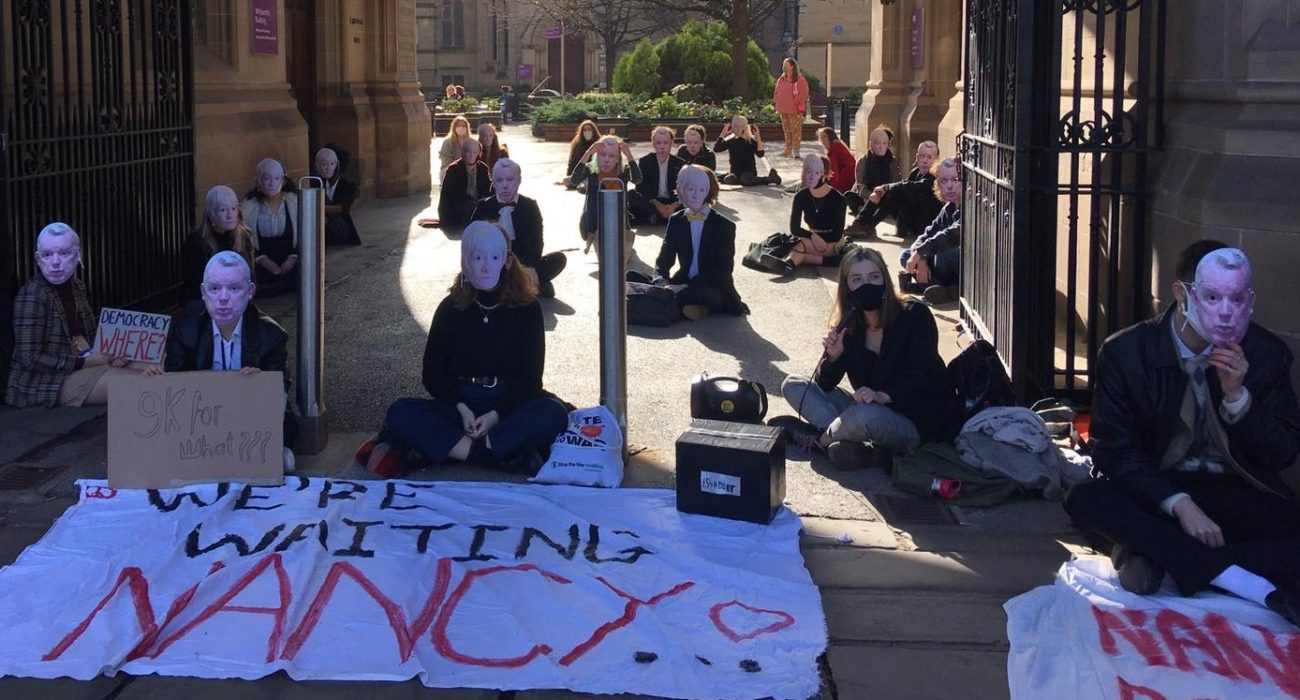 Student from the Nancy Out campaign staged a sit-in protest. Photo: Nancy Out Campaign

This afternoon members of the student campaign group Nancy Out staged a sit-in to protest the ‘lack of action’ from the University, following a successful a vote of no confidence in the UoM Senior Leadership Team.

The vote of no confidence was passed with an overwhelming majority of 89% last week, in a referendum held by the University of Manchester Students’ Union.

With a turnout of just under 6000 students, which equates to 13% of the student body, 4590 students voted ‘Yes’ in the referendum during a 4-day voting period.

The Nancy Out Campaign group wearing paper masks of the faces of the Senior Leadership Team, held their protest outside University’s most recognisable building on Oxford Road.

A member of the Nancy Out Campaign spoke to The Mancunion about the protest: “Today we staged a socially distanced sit-in underneath the Whitworth Arch to protest the University’s lack of action since a referendum overwhelmingly proved that the student body has no confidence in Nancy Rothwell or her senior management team.”

“We will continue to stage actions and escalate until the board of governors respects the vote of no confidence.”

In response to the result of the referendum, the University of Manchester’s Board of Governors released a public statement on Friday 12th March in which they drew attention to the fact that the turnout for the referendum was 13% of the student population.

The record for voter turnout in a Manchester SU election or vote is held by the 2015 Elections period, in which 34.4% of the student body took part. Since then, the turnout for voting has steadily declined at UoM, meaning this year’s turnout of 13% is slightly below the UK university average of 17%.

In their statement on the referendum result, the Board of Governors maintained that they have “full confidence in [Senior Leadership] to lead the University forward, and in particular in Nancy Rothwell, who has led the University with vision, compassion and distinction for the past 10 years.”

The Board of Governors acknowledged that “students have not had the experience they would have hoped for” due to the “unprecedented, difficult and rapidly changing circumstances” that the University, Higher Education sector and society as a whole have had to deal with.

“The Board also appreciates that staff have had to adapt quickly and deal with many uncertainties and have done so with remarkable success. Collectively, as a University we have been faced with difficult choices and decisions, and unpredictable events. Whilst our senior leaders haven’t got everything right, where that has been the case, they have led from the front by apologising and have always taken action to ensure lessons are learnt and improvements are made.

“The University remains focused on delivering the best learning experience possible and supporting the wellbeing of our students, staff and wider local community. Students are at the heart of our University.”

University of Manchester Board of Governors

With the Nancy Out Campaign’s promise to “continue to stage actions and escalate until the board of governors respects the vote of no confidence,” it remains to be seen what the next steps for the campaign or the University will be.

In response to today’s sit-in, a University of Manchester spokesperson said: “We fully acknowledge these are challenging times for students and the University is fully committed to freedom of expression. Our students’ health and well-being is always of the utmost importance us, this means that social distancing rules, and all other restrictions, must be followed to keep everyone safe.”