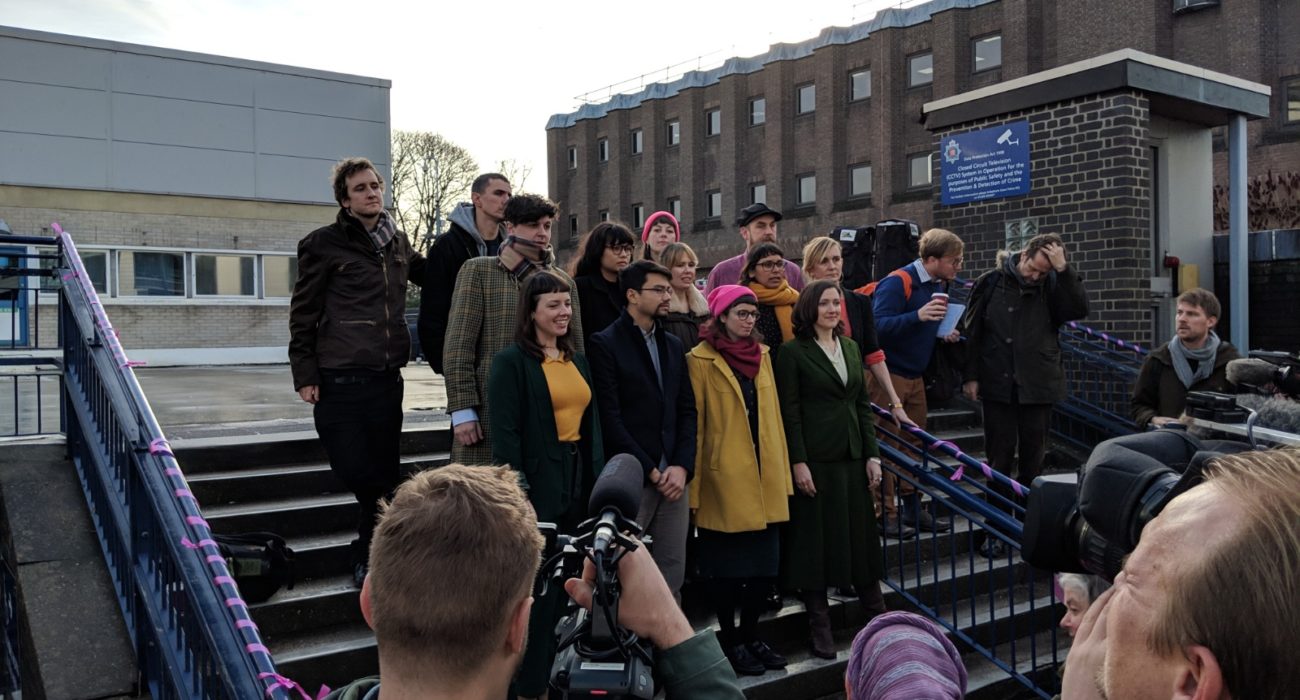 After chaining themselves around a plane to halt the deportation of 57 people from the UK, the ‘Stansted 15’ won their appeal against conviction. But despite a seemingly happy ending, the saga exposes major flaws in the UK’s approach to justice.

Immigration into the UK became a contentious topic in 2017. The rise of Euroscepticism, and the Brexit vote, pushed it significantly up the agenda. This explains the high profile nature of the Stansted 15 case: the successful attempt by 15 activists to prevent a government charter flight from deporting 57 migrants.

The charges brought against the 15 were nothing short of shocking. They were faced in 2018 with terror-related legislation: the Aviation and Maritime Act 1990 which carries up to a life-sentence.

The history of the Act makes the charges seem more overblown still. Passed in response to the Lockerbie bombing, in which 243 passengers and 16 crew died, it was the deadliest terrorist attack the UK has witnessed. Bringing this context to light emphasises the jaw-dropping degree of these charges, brought against what was a distinctly peaceful protest.

Two women on the plane, who have now been granted asylum in the UK, were believed to be victims of trafficking. One woman, a lesbian who had been forced into marriage, had been contacted by her ex-husband in Nigeria who told her he would be waiting to kill her upon her return.

Ben Smoke, one of the 15 speaking to The Guardian, declared ‘we were charged with endangering life but we took the actions at Stansted to try to protect life. That point needs to keep on being put into the spotlight.’

When comparing these charges with the charges faced by the violent, far-right demonstrators of summer 2020, the colossal inconsistencies in the treatment of activists by the UK justice system become evident.

Low-level assault on an emergency worker currently carries a sentence of up to 1 year. Disorderly/racially aggravated behaviour with intent to cause harassment carries up to 6 months. Violent disorder was the strongest charge faced by violent protesters, with a maximum sentence of up to 5 years.

This is what those who physically attacked the police and other protestors faced from the UK courts. The terror-related charges faced by the Stansted 15 were an unprecedented legal response to a peaceful protest in the UK.

The most concerning detail of the Stansted 15 case is perhaps the involvement of the then-Attorney General, Conservative MP Jeremy Wright. It was Wright who decided to bring these charges against the activists in 2018.

It’s hard not to view the scale of this response to peaceful activism as the result of a desperate attempt by the government to appear strong-fisted in immigration policy. This was an era in which the Tories were losing a mass of support to Farage’s UKIP and Brexit Parties. Political motives were no doubt a factor in the approach to this case.

We should all be concerned when, to whatever extent, political decision-making appears to interfere with our justice system, which should be defined by impartiality.

Lyndsay Burtonshaw, one of the 15, told The Mancunion: ‘how the CPS tried to send us peaceful protestors to jail for many, many years, how heavy handed this was, only makes sense when we see it through the prism of the Home Office’s Hostile Environment set of policies and practices.’

I believe a conflict of interest – namely the importance of the immigration issue to the Conservatives, especially during that period – is clear to see in the Stansted 15 case, however it is understandably a grey area. The only solution therefore is to curb the powers of the Attorney General, ending all potential involvement by an MP in the prosecution of civilians. In no fit-for-purpose justice system should it be possible for political motivations to interfere with any case.

By the time they were charged in 2018, it had become increasingly clear that Theresa May’s pledge to bring net immigration down to the ‘tens of thousands’ was highly unlikely to happen. This only increased the pressure on a weak and divided Tory government, eager to reclaim the backing of the Brexit-right.

Burtonshaw makes clear that when it comes to government conduct, little has changed. ‘The Conservative government and Home Office are continuing to commit racist discrimination, persecution and violence against Black and Brown folks, in the name of ‘controlling migration’, with little to no concern for the human rights of people.’

But the impact of the protest has been clear: 11 of those due to be deported remain in Britain. Burtonshaw tells me that one has stayed to see the birth of a child, while another has been working as a nurse throughout the pandemic.

And of course, the scandalous charges brought against the protestors have finally been dropped.

‘The crown prosecution service has confirmed that they’re not taking our successful appeal to the Supreme Court – I don’t think they can further justify such a massive waste of money to hound us and send this message, when the appeal judges stated “there was in truth no case to answer”.

That we won our appeal is definitely a victory for protest, and for anti-rascist and anti-fascist solidarity in the UK.’

Lyndsay Burtonshaw is right: the appeal win is undoubtedly a success both for the Stansted 15 and for peaceful activists across the UK. But the entire episode raises grave and pressing questions about the treatment of peaceful protestors, and the involvement of partisan politicians in a supposedly impartial justice system.

At the time of writing, the new draconian Police, Crime, Sentencing and Courts Bill has just been passed through the Commons. The rights of the general public to make its voice heard will only continue to be attacked under this current government.