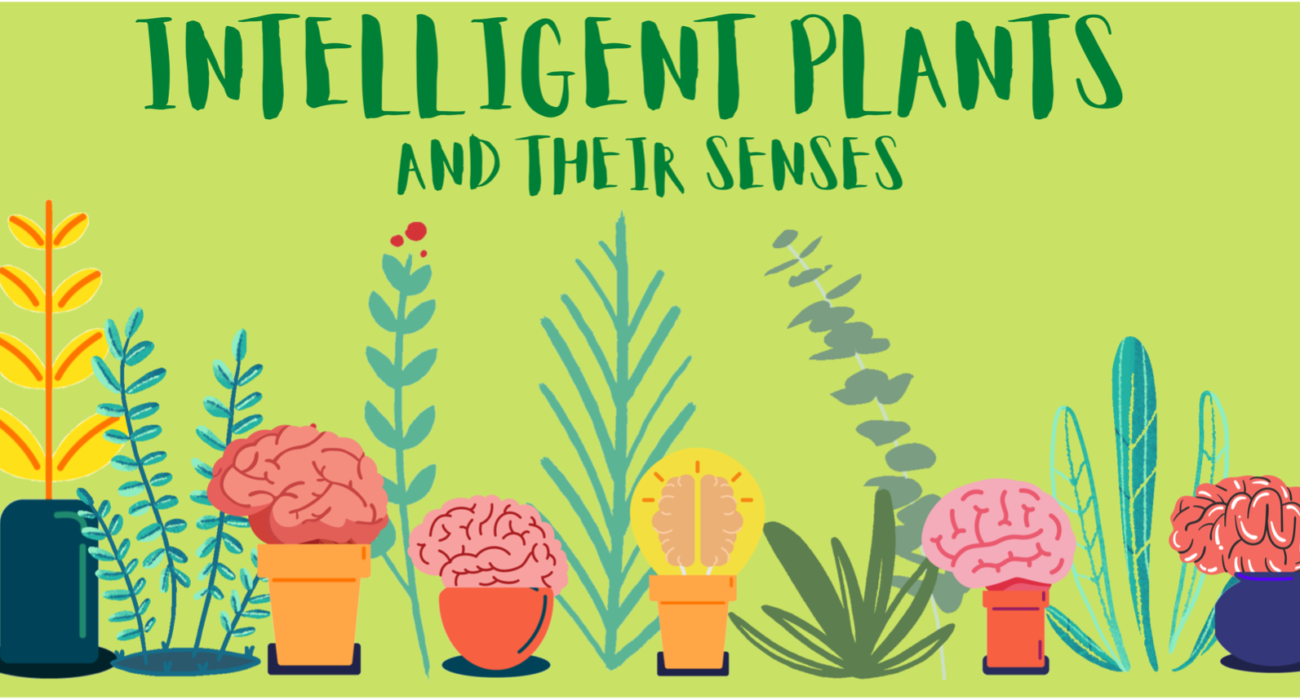 Intelligent plants and their senses

A few years ago, my biology teacher gave me a book: Brilliant Green – The Surprising History and Science of Plant Intelligence. It was her attempt to convince me of that which she had failed to do so far: plants are interesting. To my surprise, it worked.

The authors, Stefano Mancuso and Alessandro Viola, present a novel perspective on the world of green. In doing so, they help us question our idea of what intelligence is and who (or what) we apply it to.

Key to this intelligence is the ability to perceive the world around us, which we do through our five senses – touch, sight, smell, taste, and hearing. Plants use their own versions of these same senses to perceive and react to their environment.

The most obvious example of a plant responding to its surroundings would be the Mimosa pudica, also known as the “sensitive plant”.

When touched, the highly responsive hairs lining the leaves trigger the lead to fold inwards as a defence mechanism. Special red cells on the surface of the leaves act as mechanoreceptors that generate electrical signals to activate excitable motor cells, resulting in movement.

Another well-known example is the Venus flytrap, a carnivorous plant that similarly uses tiny touch-sensitive hairs to trigger the leaf to snap shut, trapping insects within. Similar to the responses of animals, these movements are caused by fast electric signalling. In addition, these plants clearly show the ability to sense mechanical stimuli – very like the animalistic sense of touch.

Sight is defined as ‘the power of perceiving visual stimuli’. For us, that power requires an eye that contains photoreceptors.

This heightened sight is the product of how important light is to plants. It dominates their entire existence. Mancuso, one of the authors of ‘Brilliant Green’, sums it up as, “having plenty of light, for a plant, is what being rich is for a human”.

It’s well known that leaves grow towards light, and that roots grow away from it. However, there are other, more complex examples of plant sight.

The wood vine Boquila trifoliata can change the size, shape, colour, and orientation of its leaves to mimic those of the host plant it grows on. This incredible behaviour allows leaves of the same vine to match their unique surroundings, essentially camouflaging the plant within its host’s leaves. The vine can see its neighbour and copy what is seen.

Plants use smell to communicate. They produce scents that each convey a specific message of danger, attraction, or repulsion, amongst others.

The surface of their cells contain receptors for volatile substances which trigger a signalling cascade to communicate information to the entire plant.

Cuscuta pentagona, a parasitic plant that sucks nutrients from the stem of its host, probes its surroundings, and grows towards its food source. In one experiment, swabs containing tomato stem extracts were placed around the Cuscuta plant, while swabs containing the solvents were used as a control. The Cuscuta plant grew towards the cotton giving off the tomato smell every time, indicating it was, in fact, the smell of the tomato plant which stimulated its directional growth.

Furthermore, the plant displays preferences for its food – given the choice between a tomato plant and a wheat plant, the Cuscuta will always go for the tomato. This decision is based on the chemicals given off by each plant, which either repel or attract the Cuscuta plant.

It must then follow, that it is able to distinguish between the chemicals and the odours they create. In other words, it can smell.

Methyl jasmonate diffuses through the stomata of nearby plants and is converted into soluble jasmonic acid. This molecule attaches to receptors within the leaf, triggering defence responses. In this way, plants use taste to communicate with their neighbours.

Hearing is the most controversial of plant senses. It may not seem obvious how detecting sound would be relevant or beneficial to plants. However, the ability to hear certain sounds, such as vibrations generated by insects or sounds created by other organisms surrounding the plant, would clearly be advantageous.

The earth conducts sound vibrations, and plants use this to detect the auditory world around them. Their mechanoreceptors, used to sense tactile stimuli, also allow them to detect these vibrations.

Experiments have shown that these vibrations influence root growth, a mechanism described as “phonotropism” (from the Greek phonos, ‘sound’ and trepein, ‘turn’). The benefit of this behaviour is not yet understood.

Other research has revealed that trees produce ultrasonic vibrations during drought. It is hypothesised that this may be a signalling mechanism to inform other trees of the dry conditions. While we may not know what use hearing is to plants, it’s apparent that they can detect sound.

It’s evident that plants can gather sensory data from their surroundings, integrate it and respond appropriately. The interesting, and puzzling, part is how they do this without a brain.

Mancuso argues that our human-centred view of the world prevents us fully appreciating the intelligent nature of plants. Their evolutionary path is so different to ours that a completely different view of existence is required to understand the complexity of plant life.

Plant intelligence may not look like human intelligence, but it definitely seems to exist.