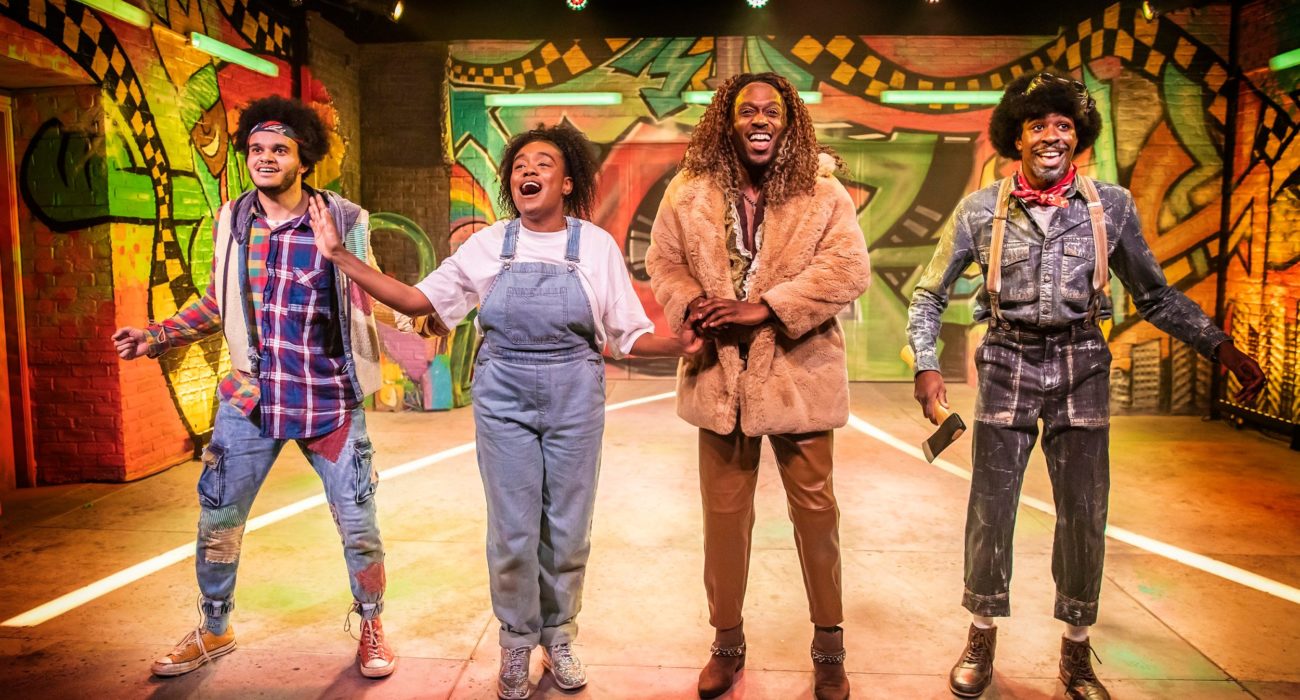 A whole decade after it last played in the UK, The Wiz is currently playing at Manchester’s Hope Mill Theatre – one of the most diverse and dynamic theatres in the country.

An all-Black retelling of The Wonderful Wizard of Oz, in the context of then contemporary African-American culture, this version brought the musical into current times. The musical began with a small television playing black and white videos from Black Lives Matter protests. It seemed that this musical, which has not lost its relevance, had been updated to reflect current Black issues – which, sadly, have not changed all too much.

The musical was not Blaxploitation, though – which many consider the Diana Ross and Michael Jackson film adaptation to be – but more a showcase of Black talent and culture. From the costumes to the dancing, the musical presented a diverse offering of Blackness. Whilst Blaxploitation offers shallow stereotypes, this musical proudly displayed the diversity that the Black community (or, rather, communities) has to offer.

From hip hop to voguing, the musical employed many different Black dance forms, each of them mastered by the insanely talented cast. The dance numbers were there in abundance, but each number was rich with substance; they never felt excessive or exhaustive. Dance was a source of communication, not only from actor to actor but also from actors to audience. Through dance, a story was told – and life was given to characters.

The first big dance number was the storm/hurricane scene. Sound, lighting, projections and movement all worked together to transport Dorothy from Kansas to Oz.

One of my favourite numbers was the sultry poppy scene, in which a handful of dancers (three or four women and one man) seduced the Cowardly Lion. The fiery dance oozed passion and sex appeal. Dressed all in red, and lit by red lights, the dancers sure succeeded in seducing the audience – even though their seduction of the lion was cut short.

My favourite dancer number, however, was the scene in which the protagonists entered the Emerald City. Now dressed in green, the poised dancers turned the theatre into a ballroom, voguing in every direction possible. There was something robotic about this dance, like the actors could not escape; it was as if they were in a trance. In a way, they were: they’re under the allusion that the Wiz is indeed a wizard. They knowingly wear green spectacles, deluding themselves into believing that the Emerald City is in fact green (at least, that’s the case in the original novel, even though it was omitted from the film adaptation). The citizens are, essentially, in a cult of personality, worshiping a charismatic leader who is neither great nor powerful. La vie en vert…

Whilst the choreography was my favourite part of the show, the vocal abilities of the entire cast were astounding. Each Witch had a bold solo song that allowed the actors playing them to show off their vocal skills, and each of the male protagonists was introduced with a banger of a tune.

The Witches did not have much stage time. The Wicked Witch of the East was never seen – save for her legs – whilst the others appeared in only one or two scenes each.

It was strange that the Wicked Witch of the West (Ashh Blackwood) did not have a fiery (literally) introduction in the scene where Dorothy arrives in Munchkinland, like she does in the 1939 film. In some ways, The Wiz is more faithful to the original novel than the 1939 film adaptation. Whilst The Wiz retells the story in the context of then contemporary African-American culture, most of the plot points remain the scene; it’s just culturally different. The 1939 film adaptation, however, made some artistic differences, from changing the silver slippers to ruby ones and introducing the now-iconic Wicked Witch of the West much earlier.

Keeping the Wicked Witch of the West out of the action until the opening scene of the second act – in which the protagonists are sent to kill her – made her introduction all the more exciting and thrilling. What a way to open a second act!

Whilst the Wiz turned out to not be so wonderful, Cameron Bernard Jones’ portrayal of the character was nothing if not wonderful. I did not need to wear green spectacles to see (and hear) that his acting and singing (and eye make-up) were striking.

The male leads were phenomenal. Tarik Frimpong’s Scarecrow was hip and groovy. It’s not easy to play a role made famous by Michael Jackson, but Frimpong killed it. Llewellyn Graham was poised and powerful as the Tinman, whilst the camp, colourful Cowardly Lion was played to perfection by Jonathan Andre.

Dorothy, meanwhile, was played by a charismatic Cherelle Williams, who powered her way through the entire show. She hardly got chance to breathe, singing and dancing and entertaining us the whole time. Like Scarecrow, Dorothy was played by another huge star in the film adaptation of The Wiz: Diana Ross! Still, Williams held her own, refusing to imitate and instead crafting her own character.

The musical was not perfect, but what is?

There were a couple of artistic decisions that were questionable – though not problematic. For starters, Dorothy was British, whilst everyone in Oz had American, African and African-American accents. I imagine this was done to make her (and the show) more relatable for the audience. It was as if we, the Mancunian audience, were being transported to the foreign land of Oz – along with Dorothy. Yet, Dorothy was still said to be from Kansas – and even commented on it being right next to Nebraska, the Wiz’s home state.

However, others might think that the weird British-American fusion made The Wiz even more wacky and whimsical.

Lastly, whilst the show does not present shallow stereotypes of African-Americans, I did find that most of the characters lacked character development. Whilst the acting was exceptional, the actors’ acting abilities were sometimes let down by the writing, which resulted in hammy, pantomime-y performances. As aforementioned, the Witches only appeared in one or two scenes each, so there wasn’t any room for character development, and that’s fine, but some of the major characters could have been developed more successfully.

Every show has its negatives, though, and The Wiz‘s positives far outweigh any of its negatives. I smiled and laughed my whole way through the show, and the cast had the whole audience boogieing with their post-curtain call performance of ‘Ease on Down the Road’.

Now, The Wiz might lack the character and depth of Wicked (another musical that retells The Wonderful Wizard of Oz, but with focus on gender rather than race). Indeed, there’s a reason why Wicked is the roaring success that it is whilst The Wiz has not played in the UK for a decade.

That said, Hope Mill Theatre’s production of The Wiz was a brilliantly directed visual treat with an insanely talented cast. As somebody who watches a lot of theatre, I’m aware of just how White it is. Usually, the curtain lifts to reveal a sea of White faces – with a mere few splashes of colour.

So, it was such a welcome change to see a production with an all-Black cast. The contributions that Black people have made to the arts are immense. There is an incredible talent pool of Black talent, yet most productions make little use of it, offering the odd role to a person of colour – token casting, perhaps – and even then, the Black and brown people they cast are usually on the lighter side. Take The Prince of Egypt, which closes in the West End next month. Sure, its cast is mostly made up of people of colour, but all of them are light-skinned – save for Nefertari, the most unlikeable character in the whole show.

There are countless people of colour who ooze talent and creativity; they’re just not getting the opportunities, notice and credit that they deserve. The Wiz is a beacon of hope, for it not only showcased but also celebrated the best of Black British talent – and showed other productions what they are missing.

So, sure, The Wiz might not be Wicked – but it’s also nothing if not wicked.

The Wiz plays at Hope Mill Theatre until 16th January.