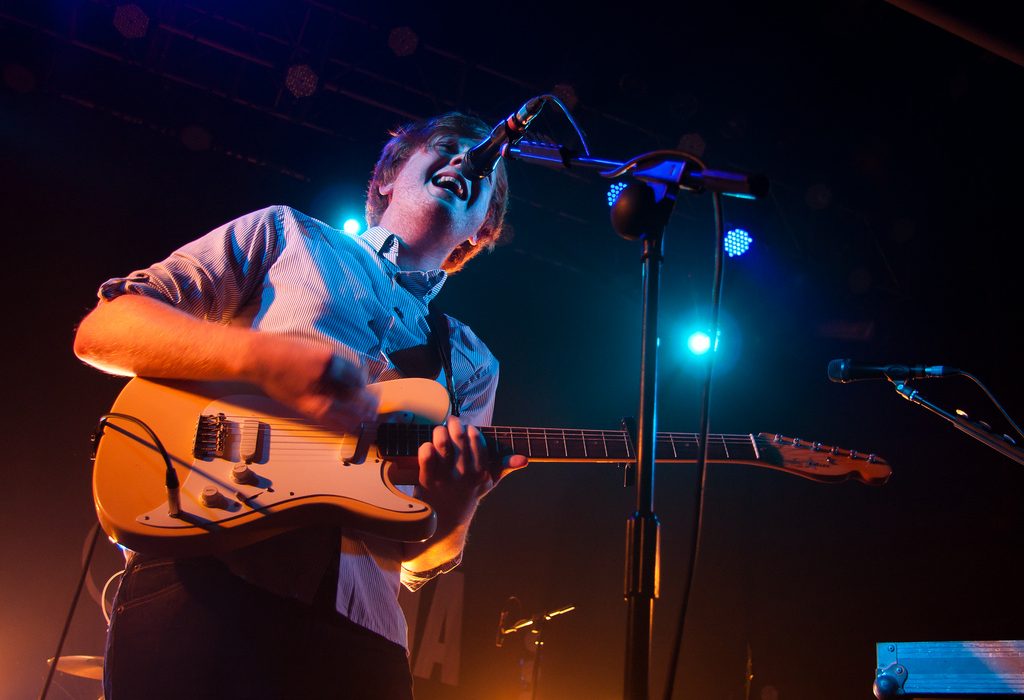 Alex: We’re having a great time, it’s the fourth date of the tour tonight, the crowds have been great so far and everything’s going really well. It’s quite easy being on the bus, we can get a fair bit of sleep, but we still try to go out after the gigs. We’ve never actually been out in Manchester even though we’ve played here loads.

Kevin: We’ve done Night & Day, the Academy, Academy 3 and the Deaf Institute twice I think, but we’ve always stayed in places like the Travel Inn at the Trafford Centre. I really enjoyed the gig we did at the Deaf Institute last time, but I think they’ve all gone pretty well.

A: People seem to stand back a bit more here, and just relax and watch.

It’s quickly obvious that Baird, Two Door’s bassist, and Trimble are the sort of friends who finish each other’s sentences. Sam, the band’s intricate guitarist, is much quieter, and seems happy to let the other two battle it out to be the unofficial band spokesman.

Sam: I think the shows here have a really good vibe, a nice atmosphere.

A: It’s nice to get back to indoor venues actually, we’ve done a million festivals this summer, and sometimes people don’t know who you are, so it’s cool to come back to gigs where people are there for you

K: It’s good just to have a sound check again! But the festivals were great, Glastonbury took me back the most, it was one of the first we did, and suddenly we were on the Other Stage playing to thousands of people, it was kind of unbelievable.

A: Reading was one of the best shows I’ve ever played, the atmosphere were unbelievable. But Glastonbury was fantastic too, there weren’t really any bad ones know I think of it. Everyone’s just out to have a good time aren’t they.

K: They just want to get out a sun tan, and see some bands, so everybody’s having great fun. We saw loads of bands this summer, we shared a lot of festivals with Foals, and seeing The Strokes was amazing.

A: I think Queens of the Stone Age at Pukkelpop was the best for me.

S: And we managed to see The National about four times, and they were always brilliant. But we’ve had a pretty good summer in all, no rubbish gigs that I can remember.

K: There’s been interesting ones, like playing at a Korean beach festival where all the acts were DJs except for us and Kanye West, which seems like the strangest line-up.

A: Last year we seemed to always be getting put on the dance stages, and then this year we seem to have been put on the more commercial stages, like the Other Stage at Glastonbury, or the Radio1/ NME stage at Leeds & Reading. But yeah we always seemed to get lumped with dance bands at festivals before.

K: We seem to be back to back with Delphic at pretty much every festival.

Since their debut album Tourist History came out in March, Two Door have been on the road pretty much constantly, and following this month’s UK tour, they’re heading off to America, before coming back for a tour of mainland Europe just before Christmas, and then heading off to Asia in the new year.

K: I’m sure the tours are gonna fly by, but it’s kind of hard to see past the tour and think about new material, because it’s essentially like doing a world tour. Somebody posted on our Facebook ‘see you in Kansas in twenty days’, and it’s only now that’s really sinking in.