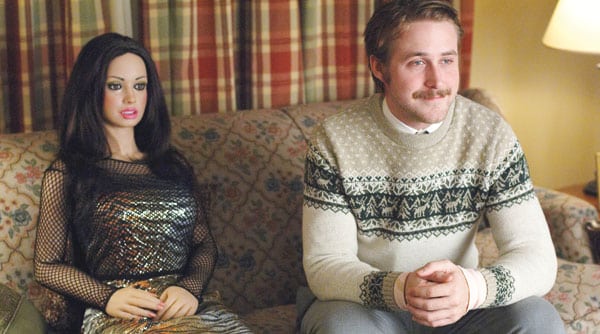 Lars liked to talk for the both of them

Lars liked to talk for the both of them

‘Anatomically correct blow up sex doll’ and ‘heart rending tearjerker’ aren’t usually phrases that appear in the same sentence. This film, however, somehow manages to seamlessly entwine the two and sit them together as naturally as emos and Twilight.
Set in rural Wisconsin, slightly disabled, delusional recluse Lars bewilders his family when he introduces them to his new girlfriend Bianca, who is, in fact, a sex doll. The locals, who are fond of Lars, think it best to indulge his delusion and welcome Bianca into their lives. Ryan Gosling’s character in this flick is a far cry from that of Noah in sob-fest The Notebook, but don’t fear ladies, he is still fit, despite sporting a questionable moustache.
The relationship that Lars forms with Bianca is genuinely touching; enough to thaw even the coldest of hearts and the film approaches the difficult topic of mental illness with great sensitivity. Gosling’s portrayal of Lars’ childlike innocence is endearing and most importantly, believable. Coupled with quality performances from the supporting cast, in particular doe-eyed Emily Mortimer as sister-in-law Karin, this film really is something special.
If you fancy a refreshingly different take on the rom-com then look no further. Lars and the Real Girl manages to charm the viewer while at the same time successfully avoiding ‘cutesy’ territory. The end result is a seriously heart-warming film with just the right amount of bittersweet to keep you smiling right ‘til the end.