‘Ed Miliband in Conversation’ at University, hours before Labour victory

Ed Miliband held a Q&A session at the University of Manchester just hours before winning the Labour leadership race. The new Labour leader answered questions put to him during ‘Ed Miliband in Conversation’ by a 300 strong student audience and spoke to The Mancunion afterwards to talk student politics and activism.

Ahead of the Labour Party Conference and the announcement of the new party leader, Miliband, alongside MP for Manchester Central, Tony Lloyd, took to the floor for the Labour Students and UMSU organised event. The evening was kicked off by Manchester Labour Students’ Chair Andrew Campbell, who welcomed students to the event.

The high profile ‘Ed Miliband in Conversation’ event was marred with controversy before it even began, when students were turned away at the door, and it was announced Miliband would not be attending the social at the Union Bar as advertised.

The Q&A session itself went ahead without any problems. Miliband and Lloyd conducted the event together, with Lloyd picking students from the audience to ask questions.
Tony Lloyd also discussed the state of the Labour party and his constituency in Manchester before Ed Miliband appeared on stage: “I’m just going to say a few things actually; thank you for coming, my party has just been through a very intense period, between the election campaign and getting a new leader. What this means now is we can actually start talking politics, because your generation is the generation that is going to change the nature of this country.
“I love Manchester; it’s one of the greatest city in the world, certainly for students.”

Amidst a red background reading “Ed Miliband for Labour Leader” and “Campaigning for the future” Ed emerged from a side door and showed why he had been billed as the candidate for change and the dark horse of the competition.

“Thank you, the first thing I won’t say is ‘Please vote for me’ – because voting is over”, said Miliband. The former Shadow Energy and Climate Change Secretary then addressed the audience before the Q&A began.
“What I’ll talk about is the future of Labour and politics briefly, and then it’s your turn to ask the questions. For the future of the Labour party and British politics it is really important you get young people involved, and the world faces an enormous challenge.”

Ed Miliband showed some of the personal charisma that commentators claim won him the election when he spoke of how he got involved in politics.

“I’ll tell you how I got involved in politics. My parents were refugees who taught me that life experiences matters in life and death and they taught me why politics matters. It’s a sense that you can’t walk on the other side and say injustice happens – do something about it. And that’s why I stood in the leadership contest.

“I believe politics makes an enormous difference to people’s lives and as we face massive challenges ahead it’s important to encourage political engagement. There’s the issue of ageing, higher education and gradual unemployment.

“I want to win back people’s trust and engage people in politics. I believe the gap between the rich and the poor is far too wide and that climate change is one of the biggest challenges we face.”
Perhaps referring to student’s disengagement with politics, Ed Miliband addressed political apathy by arguing, “Politics is an imperfect vehicle but it is the best vehicle we have for making change. Politics is about changing lives.”

Branded as the student-friendly Labour party candidate, Miliband spoke of the next generation and the importance of student engagement.

He also marked his vision for change, “One of the most important parts of this campaign is admitting where we went wrong and showing a sense of humanity. I’m not going to quibble with you but there were things we got right and things we got wrong. I believe that there should not be a market in higher education, and there is a big divide in British politics over this.

The Mancunion also spoke briefly to Ed Miliband after the lecture, when he told us what his proudest moment was in student politics: “I was leading a rent dispute with my college, because they tried to put up our rent by 39% and I was a President of the College Student Union, and everyone was up in arms, and we had four weeks of great fun, I have to confess.

“We sort of won a partial victory, we didn’t win a complete victory but it gave me the passion for politics, and it was my best student politics experience.”

When asked whether his social activism as a student different from his politics, Ed Miliband also said, “I found when I was doing the job of Climate Change secretary, part of what I sometimes wanted to do was get on the other side and campaign against myself.

“You want and need to be someone who is always pushing and always pushing for more and you don’t actually want to become an established politician who is remote from pushing the boundaries and that’s a really important lesson.”

Towards the end of the session, Miliband showed more of his vote winning charm when questioned by Adam, a first year Economics students, “How’s economics?” Miliband asked, and Adam bantered back “Better than ever, but too much maths”. After talking for a couple of minutes, Tony Lloyd commented, “You’ve certainly proved you’ve got questions.”

Ed Miliband left by emphasising he was keen to work with students in the future, “I will be engaging with young people if I become Labour leader tomorrow. It’s quite simple – we’re no longer the party of establishment, we’re not in government, and we need to start thinking about civil liberties and foreign policies. We need to attract young people to politics.” 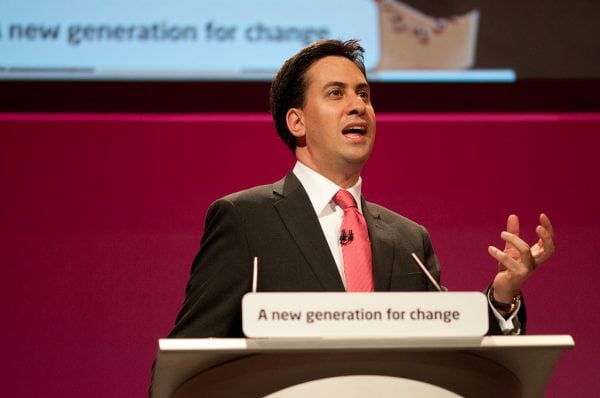 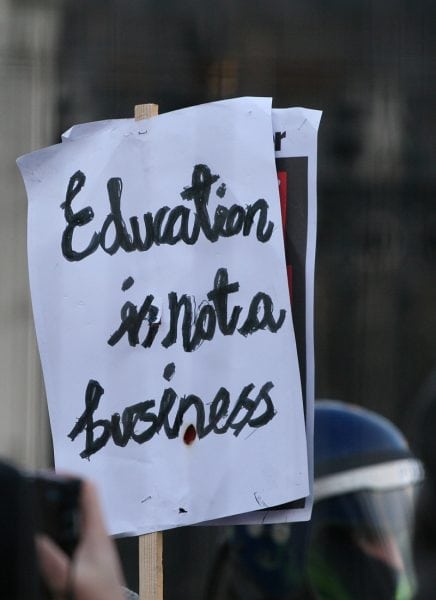 University degree not worth £9000, say 81 per cent of students