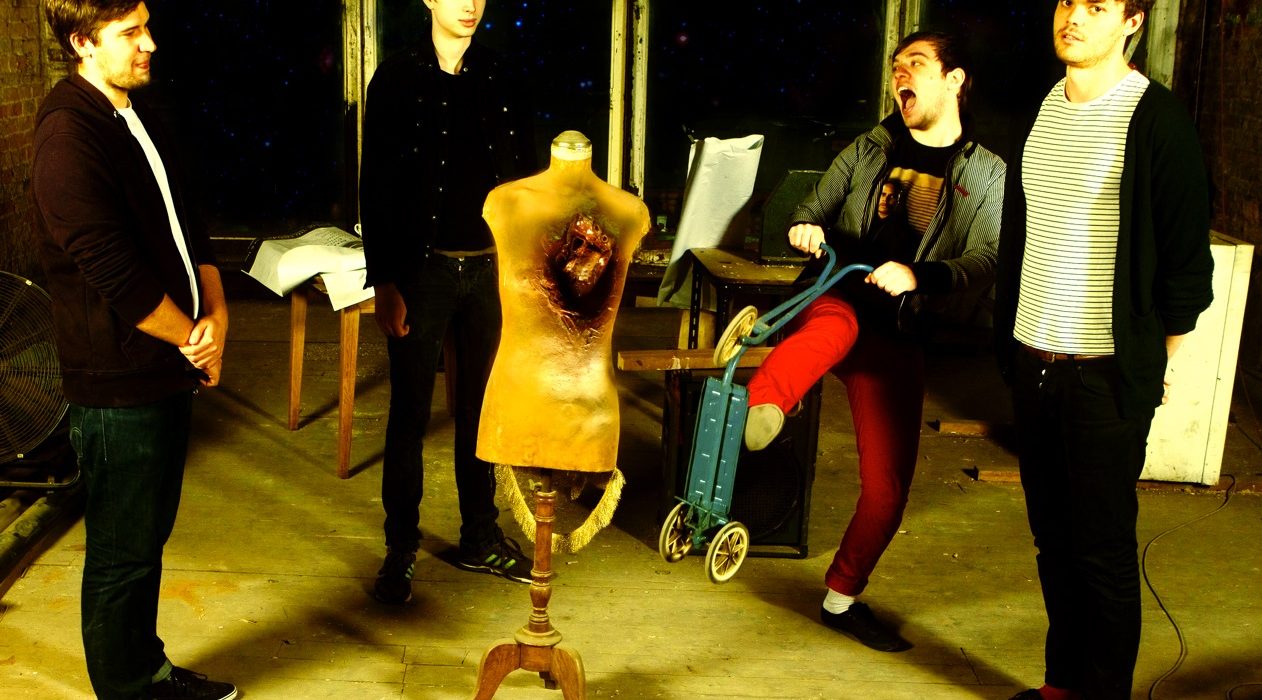 There’s a rumour that you’re back in the studio?

Yea we just got a load of new equipment that we’re trying out, so there’s a few new songs we’re working on. We haven’t got to the recording stage yet, we’re just still in the rehearsal room!

Are you planning on getting something on tape fairly soon?

I’m not entirely sure, there’s talk of us going into the studio early next year. Everything in the music industry kind of shuts down in December.

Yes, but some of the songs on it are a couple of years old now. We recorded Man Alive in February so we’ve had almost a whole year of playing it again and again! We’d like to have some new material for our live shows.

The second album always seems to be quite pivotal in a band’s career. How are you approaching it? Will it be a new departure?

Well we tried to make the first album as diverse as possible, with the intention of opening up doors early on that we could explore later, and to give us a bit of freedom with developing our sound. It’s too easy to just block yourself into a musical corner with no scope for progressing, and we wanted to avoid that. For the second album I guess it’s about finding our niche sound and refining it.

Musically, do you ever listen back to some of your earlier songs and think you’ve matured since then, or that you could have done better even?

We’ve certainly matured a lot in the last year or so, but we’re very happy with what we’ve done so far. All of the songs on Man Alive have gone through several lives, both in the studio during the recording process and through re-writing them after gigs… Well all except one anyway, which funnily enough is the song we’re most pleased with! I think if we could have done anything differently which would have improved the songs, we’d have figured it out long before the album came out.

You’re on tour at the moment, what are your favourite places to play?

We always get a great response in Manchester, but London and Newcastle too, as the other members are from there.

How did the gig with a full orchestra come about?

We did a show last year for the Mencap charity which we did as an acoustic set with a string quintet. We really enjoyed it so though we’d give it another go. This time we’re playing with 15 other people; it’s a huge sound when everybody plays together!

Are you re-writing all your songs then?

We’re not doing it ourselves this time as it’s a big task. At the moment we’re going into rehearsals with the orchestra playing our own music back to us; it’s a bit surreal! A lot of the songs have been re-worked, and there’s a few new bits that have been added here and there.

Between the four of you, you seem to play about 10 different instruments. How does that work when playing live? Are some aspects of the album difficult to pull off in a gig?

It is a problem but we try not to let that stop us! When we’re in the studio sometimes there’s a temptation to just add another guitar part to a song for the sake of it, but for Man Alive we had a really good producer who made sure things didn’t get too complicated. When we play live we sometimes have to leave out a few parts for practical reasons, but it doesn’t affect our overall sound and the audience sometimes doesn’t even notice.

What can listeners expect from any new material?

Well we’re using a lot more technology now and looking into what we can do with that. One cool piece of gear we’ve got recently is a keytar! It’s basically a guitar that you play like a keyboard, that can trigger samples and stuff. Also our drummer Mike is using a lot more drum pads and synthesised sounds to create drum loops. We actually got a lot of ideas from Delphic when we toured with them.

Speaking of Delphic, obviously you’re both breaking into the music scene at the same time and from the same city. Do you feel a particular affinity to other Manchester bands, or the music from the city’s history?

We do take few influences from other Manchester bands, but no more strongly than a band from London or Edinburgh would. None of us are even from Manchester, we’re all from different cities and just happened to meet here while we were at university. Obviously we love Manchester and we love the history of the city, but I think the influences of Manchester music can be heard across the whole country. A lot of bands now aren’t particularly interested in music from the 80s and 90s because we’re all too young to remember it, and we certainly don’t want to hang off the coat tails of it. If we were from Liverpool we’d probably be constantly asked about how the Beatles have influenced us. We’re just trying to do our own thing.

Tags: Eoghan Bennett, Everything Everything, interview