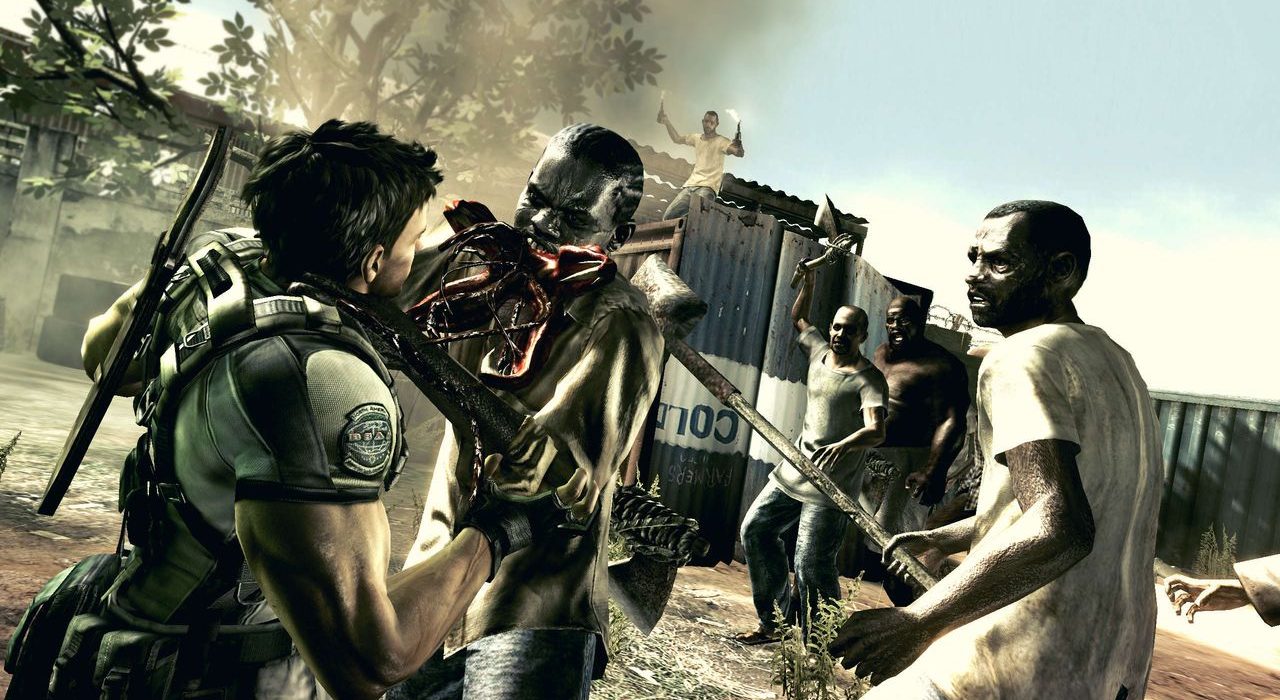 I was asked recently whether Resident Evil 5 is worth buying. Well with the release of Gold Edition- a complete collection of the Resi 5 experience, including all add-ons, overpriced DLC, and compatibility with the new Playstation Move controller- let me tell you what kind of game Resident Evil 5 is.

Resi 5 is a game that takes so much from the 2004 Gamecube masterpiece Resident Evil 4, that it is practically its aesthetically prettier, yet emotionally and intellectually shallow sibling. Playing this sequel feels like you’ve made a decision to date the prettier sister, but over dinner realised that she is brain-numbingly stupid, has a massively inflated sense of ego, and has bastardised almost every perfection that my previous beloved tried so hard to create. For instance, Resi 4 gave the player a unique item storage screen that worked like a weapon based version of Tetris- you had to angle and sort items to fit into your backpack’s limited space. It complimented the survival-horror genre perfectly, as you decided whether it’s worth taking that spacious rocket launcher along and, if so, what to discard to squeeze it in. In contrast, Resident Evil 5 has decided that the world is not intellectually ready for Tetris and has butchered the item screen down to a grid of 9 squares, where an egg is apparently the same size as a grenade launcher, and where grenades can be stored in their baulk, but herbs, in this life and death situation, cannot be pressed together to take up virtually no room at all. In the same way, melee vests can somehow be worn on the torso and in the bag at the same time. I quickly came to the decision that Resident Evil 5’s sole purpose of being is to piss me right off.

Resident Evil 5 is a game that has taken its predecessor’s over the shoulder view, enemies, weapons, premise, story, gameplay, animations, and practically a liver and two kidneys in its shameless butchering of a great game. Resi 4 took a detour from your typical survival-horror-with-zombies route and drove the car of innovation straight down human villager alley- a rather unvisited place in video games that added dashes of empathy to make the experience even more uncomfortable. Resi 5 has gone the same route, which is fine, but has added so little to the idea that it feels dated and over-familiar for a game that’s running on a highly superior console. It’s even more of a let-down when you see the same animations from 5 years ago.

The story is practically identical to any other game from this series, so isn’t even worth a mention. Any impression given by the stunningly realistic visuals are quickly ruined by unbelievably stupid and un-lifelike AI. The set-piece action from 4 is still alive in a way, if you can call breathing through tubes and an iron lung while slowly falling into a vegetative state ‘living’. Each set-piece or boss battle seems dumber and easier, only occasionally making you think in the puzzle sections and never really portraying the ‘horror’ element that is expected from this type of game. Anyone who played Resident Evil 4 will remember a particular set piece where you (as the slim, limp-haired, vulnerable character, Leon) , your helpless female companion, and some Spanish guy are trapped in a wooden house in the dead of night, while a surrounding horde of indoctrinated villagers slowly amble their way to your position. You’re given the shortest minute of your life to secure the windows and doors by barricading them with furniture, while your female friend hides upstairs and your Spanish chum makes some pant paella. Anyone who played the situation could give you a ‘Nam-like story about how they survived. Mine culminated with a last minute dash upstairs, running out off all ammunition, save for a grenade, and tossing it downstairs blindly in the hope that it would finish off the last of the horde, arming my melee weapon hopelessly, just in case. It worked. If this same scenario was ported to Resi 5, your female companion would be kicking ass, your Spanish chum would be doing the flamenco whilst shooting the invaders, and main character Chris Redfield would be checking himself out in the mirror and flexing before headbutting something! It’s got too much of a focus on the ‘oo-rah’ gameplay that has proven popular lately.

And perhaps that’s why Resi 5 is never particularly scary (like the best horror films), jumpy (like the best thrillers), or even gross (like the dregs of dumb horror). Chris Redfield- previously seen in the very first Resident Evil- is beyond your typical action hero: he has the gruff soldier like qualities of an action hero, a well equipped side-kick, and arms that make you believe that the enemies are not the only ones injecting themselves with killer substances. It’s why a foe will take ten of the best bullets to their vital organs before dying, or one of Chris’s standard kicks. It’s the reason why when confronted with a boulder big enough to plug the BP oil leak, Chris moves it- and this is in all seriousness- by punching it into a river of lava. It’s the same with the dialogue, which is riddled with clichéd lines that would be too cheesy for porn- who, in this day and age, can listen to the threatening and serious war cry of “not on my watch” without cringing? If it was tongue in cheek it would be bad, but never is it portrayed as anything but serious, making it so much worse.

So, when your main character has an arm-span wider than the circumference of his head, and when the game isn’t particularly testing, the feeling of vulnerability is lost, and as a result, so is the horror. When the game features enough ammo to start the next Great War, the survival element becomes nullified. As a result, what was once a fantastic survival-horror game is now neither of these things. The only thing it can boast about being is a game; and Resident Evil 5 isn’t even a good example of that.