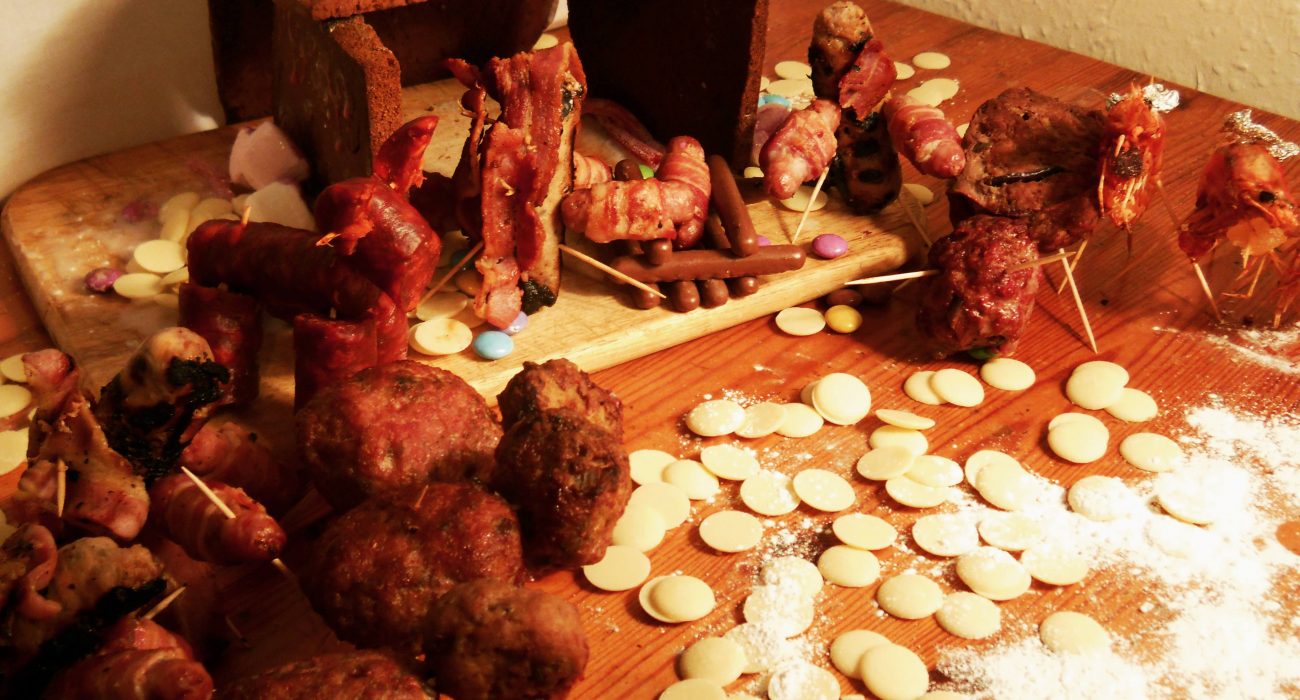 It was several nights before Christmas and all through the house, nothing was stirring apart from me, in the kitchen, with piles and piles of meat. I was creating an edible homage to one of the greatest spectacles of all time, a sacra-licious nativity scene was a diorama depicting the birth of our savory saviour.

I aimed to honour the wonder and spectacle of that starry night by ensuring that each character within the scene was appropriately reflected in their culinary composition.

The sweet stable was a Hansel and Gretel affair. It was to be a gingerbread house, but it didn’t quite turn out as planned. Although I followed the recipe diligently, carefully decorated each slab and did my best to assemble the structure correctly – it unfortunately crumbled. A biscuit architect I am not, I always thought a gingerbread cave was a better idea anyway.

Away from the sugary baking, it was time to make the meat. His cocktail-sausage-holiness was to be kept warm from the cold by a bacon blanket. Laying peacefully in a crib of chocolate fingers, he technically died for my dins (oh dear – too far?).

Mary kindly looks over her new born in her salty scarf. Joseph is of course standing awkwardly pondering the complexities of fathering a child sent from heaven, who is also a sausage.

Glistening with fat, and cloaked in bacon lattices, the shepherds lead a flock of meatball sheep (which of course were created out of lamb) to the gingerbread stable to get a glance at the new born sausage king.

The animals who’s stable was so rudely transformed into a maternity ward were the ox and ass. The ox was created from beef meatballs and the ass from the finest chorizo (which is probably donkey meat anyway).

Melchior, Caspar and Balthazar, the three king prawns, all fried in garlic and chili, each carried a gift of sugary, gelatin goodness to celebrate the birth of their new lord.

I will probably now be going to hell for creating such a masterpiece, but I think the taste was a fair trade off for an eternity of torture. Ditch the cliché mince pies and boring mini quiches, creating a nativity scene out of sweets and meats is a great way to celebrate Christmas and spread festive grease.