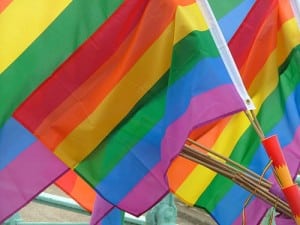 A psoter from the FA's new LGBT campaign

E: Say there’s a policy about anonymous marking, people debate whether it’s valuable or not, but no one is talking about what a value it is to LGBT students, you can’t guarantee that voice in the room unless they are elected. If you have a homophobic lecturer, it’s really important to have anonymous marking.

S: We need representation, so that LGBT students always have a voice on counsel.

A: There are places on counsel for ethnic minorities to be represented. LGBT people are underrepresented and racism definitely takes precedence it terms of discrimination. I grew up and experienced racism, and tackling that is more important than homophobia. Neither is good, obviously.

G: Any group that is underrepresented in elected bodies- you need to take steps to make sure that doesn’t happen, and while that prejudice exists you may need to have specific positions.

AS: From schools that I was at, I know people who were black or Asian, and they didn’t have a problem at all, but until the age of 18 nobody came out. But two or three years after that, I know about ten, fifteen people who all came out. To an extent, in areas where there isn’t such racial division, race isn’t such a big issue, but homophobia; especially amongst children and teenagers is still quite a big problem.

E: What’s interesting with LGBT societies at a university level is, as [Andrew] just said, is that a lot of people start to come out then, so it’s really important to have representatives on council, but also to ensure that the university is a friendly welcoming place where people can come out.

Y: But why do we group LGBT all as one group?

G: LGBT people have very similar issues and challenges in society, but there is also a place to have separate groups and we do recognise that as a society.

E: I think one of the things is that legally, they’ve been oppressed under the same laws, so although two people’s individual experiences might not be the same, but they experience the same oppression.

S: It does seem a bit forced though sometimes. Sometimes trans people berate me for not knowing about their issues. However, I think it would be very difficult if we said: ‘Trans people go and deal with it yourselves’, because they’re the minority within the minority.

G: There’s also a lot of overlap between the groups.

ES: Isn’t it true that 50% of trans people experience a change in sexuality during transition as well?

E: Most people, there’s going to be a question mark about your sexuality at some point in the process. The same with all liberation campaigns, if you create divides then you’re never going to win a campaign, but if you can work out where you do have things in common then you have a chance of winning campaigns.

Y: So why do we have an LGBT week?

S: I meet a lot of people who are very ignorant of LGBT issues, people who are completely onboard with LGBT rights but who turn around and say things that are phenomenally ignorant to me. Someone I know who is completely socially liberal in every respect asked me if it was appropriate to refer to trans people as ‘it’. I told him – ‘You use the pronoun that they want to use.’  If he’d gone and said that to someone who was trans, if they’d been of any size, they would have decked him. Awareness week is about going, ‘Hi, we’re here, we exist.’

E: For me the most important thing is having the banner outside the union that says LGBT awareness week. It’s a symbol that the Union supports [LGBT students] and won’t tolerate any prejudice. You don’t know which students that banner’s hitting that haven’t come out yet.

D: That’s really important. My school was an all-girls school and one of my best mates was the only girl that came out, really young, she was thirteen. She suffered so much prejudice, even from the teachers. Having that sign up does say a lot.

G: It’s really nice to create a safe space, just to show that if maybe you’re not out or if you are out and have experienced homophobia; the union is a safe space for you to be LGBT in.

ES: I think it’s important for those that don’t belong to the group to have that week as well, because there are a lot of people who are quite ignorant, and having it in people’s consciousness is important so that people can think about how they respond to it.

D: It’s important to know that there’s somewhere for people to go to ask questions, if they don’t feel comfortable asking their friends.

A: Homophobia still exists. In some places you can see it more, in comparison to others, especially in ethnic minorities. I will be trying to break those barriers down.

S: The closet is full of fabulous clothes, come and hang out.