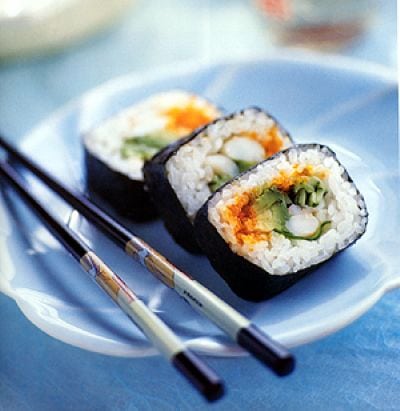 How to Eat Sushi (and Not Feel Like an Idiot)

By Emily Clark
I am a bit of a sushi fanatic. I have taken it upon myself to probe the sushi world of Manchester and can safely say that the days of eating Tesco’s suspicious interpretation of Japanese food are far behind me. However, my overenthusiastic sushi exhaltations often seem to get the same response: one of genuine interest overshadowed by the veil of raw fish anxiety. Fear not. The idea of simply eating slabs of raw fish makes me feel somewhat uneasy – thus I hasten to stress that this is not what sushi is all about.
Sushi Facts
For anyone who has not as yet ventured down this culinary path, here is the lowdown on the basics of sushi.
Firstly, sushi actually just refers to the type of rice. The seaweed used to bundle up the rice is called nori and the combination of the two to make a roll is called makizushi. Anything can be used as a filling – avocado, asparagus, tuna, salmon, crabsticks, duck; basically anything that can be chopped up to make a stick shape. Nigirizushi is when a block of sushi rice has a topping placed on it rather than in the middle. Hand rolls, called temaki, look a bit like ice cream cones, except that the cone is made of nori and is packed with rice and other pleasant things. Sashimi is the name for the slabs of raw fish, which if fresh can be beautiful.
The only other information I feel necessary to impart is the use of wasabi and pickled ginger. Wasabi is effectively Japanese horseradish, but don’t let this conjure up bad associations of eating overcooked slices of beef with your grandparents, as wasabi is much sexier. The sushi eater is given a dish for soy sauce and can then mix in the desired amount of wasabi. The idea is to start off with a tiny amount, and please learn from the mistakes of many naïve but adventurous beginners who have been robbed of their wasabi eating potential by trying it by itself. Pickled ginger is used to cleanse the pallet in between dishes.
Places to Go
Though very accessible, my issue with recommending Yo Sushi for first-timers is that they painfully anglicise the Japanese delicacy. However, in a twisted way, the patronising staff and garish decor make it an excellent place to begin. I would not have been so gently eased into the sushi world without Yo Sushi. They also employ a 25% student discount if you print off a voucher from their website. However, I maintain that any establishment offering turkey and cranberry sushi at Christmas should be forcibly shut down and the proprietors charged with community service.
For anyone who wants a slightly less English experience, most sushi restaurants in Chinatown offer a more adventurous but authentic menu. One recommendation I have is Tokyo Season, near Piccadilly Gardens, where I once ate octopus, arctic clam, squid and eel amongst some other unfamiliar things – all on a massive hangover. Everything was at least mildly enjoyable; I kept it all down and remain very proud of myself. Umami on Oxford Road and Little Samsi in Withington both offer non-patronising and fresh sushi – the latter very reasonably.
My final piece of advice is to try grilled eel sushi, as it is by far the most delicious discovery of my experimental enterprises. Now go and lose your sushi virginity, if you haven’t already done so. Because, if nothing else, the novelty of having your food presented to you on a conveyor belt will never get tiring.